Some people just won’t take death for an answer. 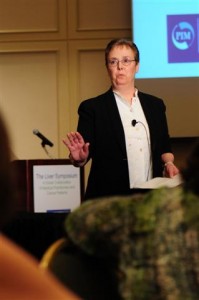 We often talk here about empowered patients’ struggles to get – or even create – the care they need. Usually we’re talking about it in a medical sense. But as far too many people know, sometimes there are other obstacles. Laurie Todd is, to me, an outstanding example of someone who wouldn’t take death for an answer – neither from doctors nor from their HMO. She says winning these battles is her calling – and she has made it her career.

My name is Laurie Todd. I am an e-patient, and I am the Insurance Warrior.

In March 2005, I was diagnosed with late-stage appendix cancer, rushed into surgery, and given months to live. I immediatley lost my business, my income, my savings. Finally, I was sent to the oncologist, who said, “There is no treatment for your disease. And, even if there were, they wouldn’t pay for it.”

That was a Friday. I spent the weekend at the computer. I pored over medical journals until late into the night. It didn’t take long to discover that there was a tried and proven treatment for my disease, involving another fourteen-hour surgery and heated intraperitoneal chemotherapry. This treatment could give me an 80% chance of no recurrence.

My HMO did not have this treatment available in their network. So, I wouldn’t be allowed to have it.

I found the world’s expert on appendiceal cancer — across the country in Washington, D.C. Then, I returned to Seattle to figure out how to make my insurer pay for it. I spent two months reading, studying, gathering proof. What I really needed was the finest lawyer money could buy. However, since I had no money, I had to turn myself into that lawyer.

Three months after receiving my twenty-three-page War Documents, my insurer called me, “We have decided to pay.” They paid it all. My expenses during 2005 were approximately $345,000. My share? Nine dollars.

I had won the treatment; now I had to undergo it. After my fourteen-hour abdominal surgery and heated intraperitoneal chemotherapy, I hit the jackpot of complications. I spent forty days in the hospital, wondering if I would ever get home. I returned to Seattle — in a wheelchair, too weak to brush my teeth — but free of cancer.

It wasn’t long before people started calling me, “We heard you had a great victory. My insurer won’t pay for my lifesaving treatment … can you help?”

As of today, I have won fifty-three insurance appeals, for lifesaving treatments costing between $100,000 and a half-million dollars. Many insurers, many conditions/diseases, all over the United States. All won in a week or less.

In 2007, with the backing of a major cancer research foundation, I published my first book, “Fight Your Health Insurer and Win: Secrets of the Insurance Warrior.” This book has sold thousands of copies, and has helped hundreds of patients to win their own insurance battles.

In May 2009, I published my second book, “The Sample Appeal: More Insurance Warrior Wisdom.”

I have addressed general audiences at public libraries and service clubs. I have spoken to groups of healthcare professionals, cancer patients and caregivers, social workers, and benefits administrators. In May 2009 I addressed an audience of two hundred doctors and patients at the Liver Symposium in Chicago.

Cancer came through my life like a tsunami, and swept everything away. I opened my heart to the experience, and found the way to survival. When others found me, I could not refuse to help them. And so, my previous life passed away, and a new profession found me. People look for that one thing that nobody else can do — their right livelihood. It took an advanced cancer, a healthcare system that thwarted me at every turn — an an open heart — for right livelihood to find me.