This is a story of a non-medical person getting it in gear when she finds herself in need, and what happens when she does.

A famous blogger/journalist is discovering healthcare the hard way. At a time when she says she’s quite upset, she had a hard time Sunday opening the scan CDs her doctors gave her; she got help for that online. Then a few hours ago she tweeted that her doctors got some scan data mixed up, and it’s not pleasant to think of the implications for her “Q of service.”

We’re known on this blog, and in the Society for Participatory Medicine, for advocating “Gimme My Damn Data.” We’ve advocated for it in Washington, we write about medical records often, and Monday night we posted the latest about this movement in the OpenNotes project and the VA’s patient health portal.

One important reason is to let patients be a second set of eyes, to check the quality – accuracy – of the data. Some doctors get huffy about it, saying it’s their business, not ours. Some say we’ll freak out if we see it. But in this movement, we say “Gimme My Damn Data,” which was the title of my first keynote speech, in 2009. (It’s got traction: googling that phrase gives zillions of hits.)

Our first big story about radiology data (scans) was in 2008, when Jon Lebkowsky wrote that internet visionary Doc Searls had a problem with his scan data; then we posted about DICOM viewers Doc might have found, given less time pressure. This October we noted that cloud scan storage is coming along.

But the street reality is that most of the world doesn’t know this – even the cognoscenti. This story is about how one of the hippest journos of our time, Xeni, discovered and is dealing with a cancer diagnosis, and with life as a patient trying to be engaged in her care.

To put this in context, you need to know who Xeni is. Wikipedia:

“…an American weblogger, digital media commentator, and tech culture journalist. She is known for her position as co-editor of the collaborative weblog Boing Boing, as a contributor to Wired magazine and Wired News, and as a correspondent for the National Public Radio show Day to Day. She has also worked as a guest technology news commentator for television networks such as CNN, Fox News, MSNBC and ABC.”

In short, this is no slouch of an observer. 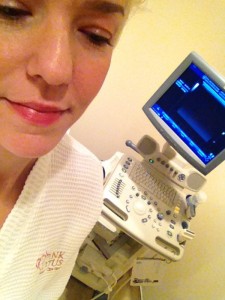 This month, out of nowhere, Xeni found out she has breast cancer. She was live-tweeting and instagr.am’ing [right] her first mammogram when the news hit out of nowhere, and she wrote a powerful, dizzying post about the experience. Having been through a similar discovery myself, when I read hers I felt: “Sister. I know what you mean.”

(Anyone who says “We’re all patients someday” has no idea until they’ve had this moment, where they realize their ass is on the line, now.)

Xeni gets her bytes on:

Well, this Sunday Xeni decided to plunge into her scan data. She’d gotten three CDs from radiology, but they apparently didn’t come with a built-in viewer. (The ones from my hospital come with a horrible 1995-looking viewer, but at least it’s a viewer, if you can figure it out.) So she went to where everyone goes these days when they don’t get answers from medical professionals: social media, which in turn sent her to Wikipedia and open source software.

@ePatientDave are you following @xeni? unfortunately a new high profile epatient, but already discovered an error looking at her radiology.

(e-Patient? Yes: a totally online patient; empowered and engaged – her post describes researching which mammography shop to use; and here she is, becoming equipped and enabled with her scan data.)

Indeed, Sunday night she live-tweeted trying to open the files. Here’s a transcript. (If you don’t know Twitter or other slang, don’t worry; you’ll get the drift.)

And now the tweets:

@Xeni: Trying to jailbreak my mammogram data files. They require proprietary GE workstation. Should be easiest call for hacker help ever. #boobs

@Xeni: So, seriously, if anyone knows how to open “MammoWorkstation” files from the proprietary GE healthcare format, @ a girl. Thanks. #boobs

@Somebadideas: @xeni did you ask technician if they can be saved in other file formats for other viewers? i had to do that once with MRI

@Xeni: @somebadideas calling tomorrow to do that. “Ah, yes, can you give me this mammo data in an open-source video codec please? OK ogg vorbis?”

@Xeni: @coreplane they look like unix executables. I’m browsing through lots of oddly-broken-up files on a CD.

@Fracture98: @xeni Sorry if this is spammy, but in case you missed it: open source viewer: osirix-viewer.com

@Xeni: Whoah. I got some of the other scans to open. I am now looking at the equivalent of a 24-frame animated gif of my own beating heart.

@coreplane: @xeni Sounds like you’re making progress. You could try the ‘convert’ command just to see if it can make something of the files.

@Xeni: @coreplane yeah, I’m looking at 5 sets of files. The mammo’s still a mystery, totally different format. Will try that.

@Xeni: @deanputney it’s actually blowing my mind. for real. I can hardly bear to look at it.

@deanputney: @xeni Send it here, I’ll look at it for you.

@deanputney: @xeni I am glad I can relieve you of this burden, friend. I have developed a powerful resistance to mind-blowing animated GIFs.

@Xeni: @deanputney the bone scan one is OMFG. It’s like dividing you into a million prosciutto slices. Basically animated GIF output.

@Xeni: @deanputney thanks for the help.

@Xeni: Now I know why docs don’t give you scan data. I see the Virgin Mary, Jimmy Hoffa, several forks, and Saddam’s yellowcake hiding in my guts.

@Xeni: And this CT scan makes my butt look big.

@YellowJKT: @xeni i like big scans and i cannot lie. you other radiologists cannot deny!  Retweeted by xeni

@Xeni: All: thanks for the kind replies about how to open mammogram and various medical imaging files. OsiriX FTW! I’m all set.

@Xeni: @collectSPACE hey pal! thanks for pinging BB about your AMAZING pix today. I was out of pocket today, glad you got through! cc @deanputney

@Xeni: So I figure out how to open my bone scan data. I look. WTF. What’s that dick-shaped ghost-shadow thing—it looks like I have a penis! [1/2]

@Xeni: I agonize about it all day. Do I have a hidden penis hanging out in my leg? Can female parts or colons look dick-shaped on bone scans? 2/3

@Xeni: I call a hacker pal. “That, Xeni, is a dick.” Look at metadata more carefully. THEY GAVE ME THE WRONG DATA. SOME OTHER DUDE’S SCANS. 3/3

@Xeni: I don’t even know how I should feel. Today was a day of other new hard news, a Big Day in the fight. And—I have some other guy’s dickscan.

@Xeni: Called the clinic, they’re not open. Now calling an attorney to make sure I handle it appropriately. I don’t want anyone else’s data!

@Xeni: Any legal experts out there care to share advice on what I do, now that I’ve realized I’m in possession of someone else’s data?

@jffcrmr: @xeni Notify agency in charge of overseeing who you got data from, and party giving you the data. Do not contact party whose data you have.

@Xeni: @jffcrmr will do so as soon as they open in the AM. I tried phoning the clinic earlier.

@Xeni: So, the other thing that arises from realizing you’ve been given someone else’s medical imaging data is: does someone else have mine?

@pourmecoffee: @xeni I take it this means you don’t want to be sent pictures of that body part in general. Asking for a friend.

@Xeni: I spoke to several loved ones today re: how upset I was to see this mystery “ghost penis” on my bone scan (on top of my own mortal worries).

@Xeni: Big thanks to @tbias for helping me use deductive reasoning, hacker sleuthery, and occcam’s razor to uncover truth. #notmydickinthebonescan

@jose602: @xeni If dude’s name is mentioned in the metadata, is it alphabetically close to yours? Or was the scan on or near the date yours was done?

@deanputney: @xeni I really want to think that this tweet is the result of @tbias saying “Yup. That’s a dick.”

@Xeni: @deanputney @tbias bingo. that is exactly what he said.

@bashert54: @xeni most likely someone else does have your medical data.

@Xeni: @bashert54 horrified by that. Not even because it’d upset me that much if it were made public? But makes me lose faith in Q of service.

@Random_Tangent: @xeni mi madre the doctor is stumped. Says talking to ’em is the only step she can think of. Was it a disc of your data AND ghost dong?

@Xeni: @Random_Tangent 3 CDs given to me, with radiologist’s written analysis. 1 of 3 CDs was Mr. Ghost Dick’s. Other CDs, correctly mine.

@minus1cjb: @xeni were all CDs labelled with your name?

@Xeni:  @minus1cjb They sure were. Only a careful inspection of the metadata revealed the truth.

@Xeni:  @Random_Tangent terrifies me that maybe the analysis I got (which said no bone metastasis!) might have been wrong. :-(

@Xeni: Forgive me, folks, if some of my previous tweets were not up to usual standard of logic. Received some shocks on my own case today. Rattled.

@Xeni: @Random_Tangent 3 scans were MUGA, CT, bone scan. The bone scan was Mr. G-D’s. The MUGA and CT were mine. I THINK.

@Xeni: I got some news today which frightened me. We’ll know more soon. But I am relieved to know I don’t have a secret penis hiding in my leg.

@warandpeace: @xeni As a not-attorney, I advise you to send the scans back with “VISIBLE PENIS” photoshopped overtop in Impact Bold.

@Xeni: @warandpeace LOL. I want to image macro these so bad, but yeah. Not even opening the files again.

@Xeni: My fear now: did cancer docs evaluating my case look at these scans (belonging to Some Guy), analyze my case on his data? I wanna throw up.

@Xeni: So, if anyone ever asks why having a copy of your medical data, and viewing it, is a good thing? You may now refer them to #ghostpenis tale.

I say: Let patients help heal healthcare. Give us our data – and make it easy to read.