Globe article on EMRs: status and the safety issue 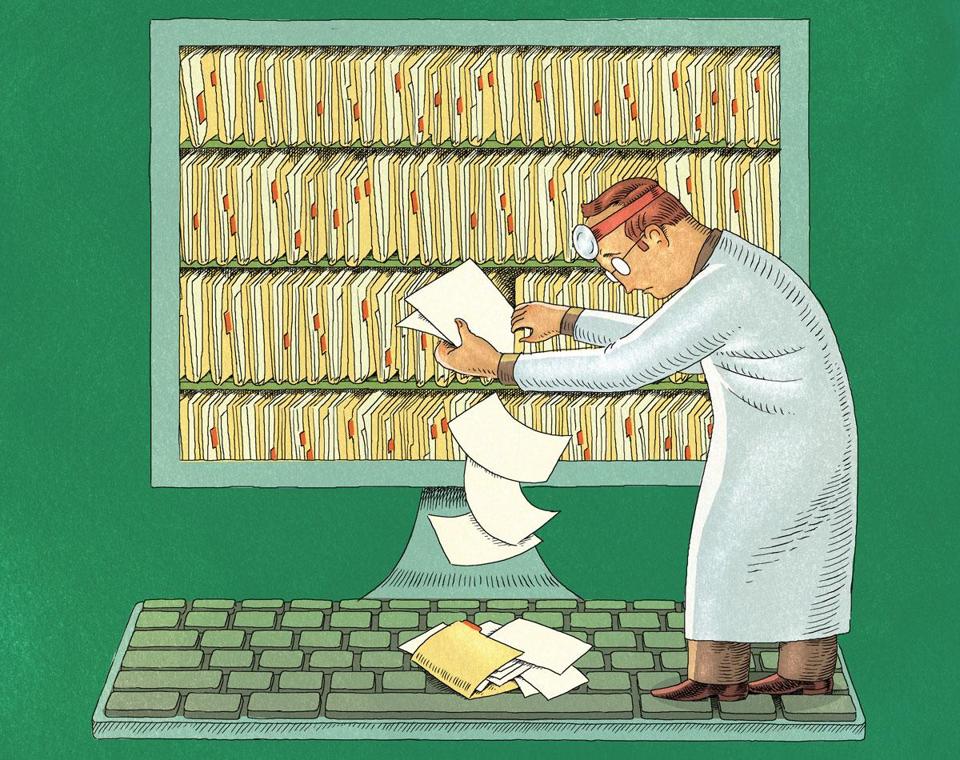 Wesley Bedrosian for the Boston Globe

In today’s Boston Globe, the cover story for the daily “G” magazine is “Record-Keeping 2.0,” by Chelsea Conaboy (@cconaboy). Subtitled “Medical care is shifting to electronic data files – but how safe is it?”, it’s a good mass-market introduction to the subject and where we sit today. If your grandmother or neighbor wonders what all the fuss is about, this is a good place to start.

This matters, because it’s a complex and important subject with a lot of half-informed whining, but Conaboy gets it right.

Many observers have written accurately about some aspect but have gotten the big picture wrong. Instead, Conaboy leads with an on-target vignette of a local doctor with a complex patient, focusing the story on a real-world example of why EMRs are needed: complex chronic cases like this account for a large part of America’s world-“leading” health costs. 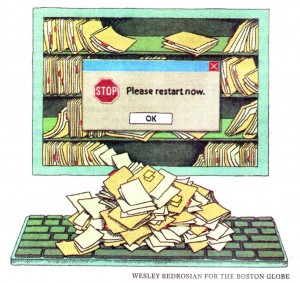 In the vignette, the doctor’s EMR system (electronic medical record) catches a potential medication conflict. She then tours the issue as it sits today – the federal stimulus bill that’s driving adoption of EMRs, last year’s Health Affairs coverage, and the controversy created last year by Dr. Danny McCormick’s much-criticized study that, in the end, made the point that we need to ask whether these systems are in fact good.

One way this affects patients is that some of the systems are really badly programmed – “crap,” as one hospital put it. (In 2010 we reported that a big L.A. hospital was extremely frustrated by how hard their system was to use, and even the replacement they chose was “the cream of the crap.” That’s their words, not mine.) When you or your mother or child is in the hospital, do you want your doctors and nurses to be stuck with a system like that?

In 2010, while the regulations were being debated on what the government would require of these systems, it was widely rumored that a powerful EMR executive refused to allow system usability to be a criterion, saying that would happen “over my dead body.” Nice.

I made that the title of a speech I gave that June: “Over My Dead Body: Why Reliable Systems Matter to Patients.” (Slides here; see slides 48-55. Video here; this segment starts at 34:10.)  But the vendor won: the resulting federal rules have no requirement that the systems be reliable or easy to use. So yes: safety is an issue that the public should be aware of.

Data quality is just as important, and not at all guaranteed: long-time readers will recall that three years ago my own medical record was discussed in a page 1 story in the Globe, because of a post on e-patients.net that discussed the many errors I found in my hospital’s insurance records. (A piece of software had foolishly assumed my insurance records would be a realistic picture of my medical history.)

Within weeks this led to the first invitations for SPM members to participate in policy meetings in Washington as the voice of the patient. I’m told that the testimony provided by several of us ended up as decisive voices for the Meaningful Use rules that require “patient and family engagement” – we the patients must be allowed to view our records, online … and report errors, and get them corrected.

This work continues, and it’ll be really, really important for patients to work together with their clinicians and vendors to get these systems to the level they need to achieve: safe, accurate, and easy to use. Conaboy’s article doesn’t specifically address the role of the patient, but it’s solid in everything it does cover, and on target.