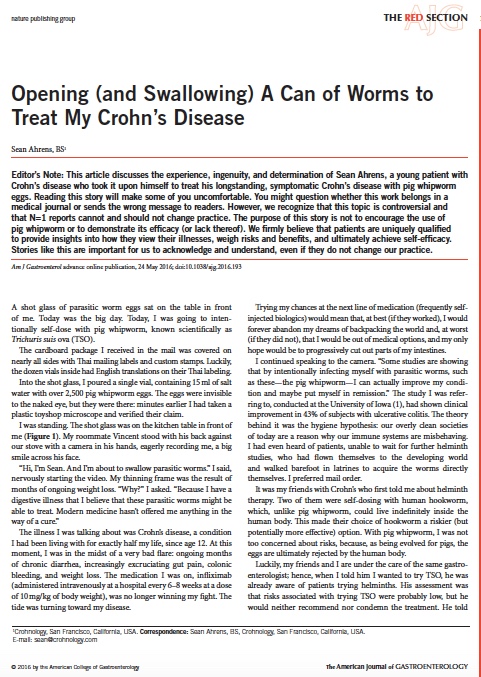 We’d love to start a list of other patient-authored papers and posters – let us know in the comments! We know of Dana M. Lewis & Scott Leibrand’s poster about #OpenAPS in June – who else??

We’ve written before about e-patient Sean Ahrens and the Crohnology community he started.  In my view the most important post of the series was four years ago: Crossing a threshold: the e-Patient movement enters wave 2. That post linked to an article in Fast Company (a business magazine!) about Sean.

Now, could this be wave 3? We’re starting to see e-patients as authors in medical journals. That is a culture change, folks.

In this case it’s not just an opinion piece – Sean devised and conducted an experiment on himself! Here’s his Facebook post the other day on it:

So I think this is kind of big news: I just got published (in print) in a major medical journal, the American Journal of Gastroenterology (AJG)!

I submitted a 1500-word scientific report of the self-tracking experiment I did on myself taking pig whipworm (an intestinal parasite) for my Crohn’s in 2010. For this experiment, I had mail-ordered the pig whipworm from the internet, shipped via Thailand in small vials. Yeah I know that sounds kinda crazy. I did this experiment from March – August 2010, intentionally ingesting TSO (Trichuris Suis Ova), a non-FDA approved treatment, every two weeks, and recorded my changing symptoms in a digital tracker I built for myself.

While I’ve given talks on this self-experiment at various health and medical conferences, the detailed report of my results have remained unpublished up until now. And they are published in a major medical journal by Nature! That feels pretty good ;)!

Unfortunately, the way medical journal publishing works is that unless you have paid access to Nature, you cannot read my publication (entitled “Opening (and Swallowing) A Can of Worms to Treat My Crohn’s Disease”). And legally I have given up copyright ownership of my submission to Nature (kind of a bummer, right?) so I can’t share it with you here; however, after 6 months from when it appeared in print (July 2016), I have rights to re-publish it online for you to view—which I will do, in December 2016.

Since you can’t read it now, I’ll give you the summary:

During 2010, my Crohn’s symptoms were very active. During most all of the experiment taking pig whipworm, it appeared the whipworm was not helping: my symptoms remained very active. Because taking care of my health was priority #1 and doing the experiment was priority #2, I started a dramatically strict diet (called the Specific Carb Diet) about 2/3 the way into my study because I needed to do anything to quell my symptoms; I continued this diet for years afterward. Three months after I stopped taking the pig whipworm (and seven months after starting the diet), my symptoms dramatically improved (and nearly disappeared); in November 2013 my physician declared after a colonoscopy that my Crohn’s showed signs of “remission with no visible inflammation”. I believe that one of the two (the diet or the whipworm) helped bring me into remission, but I cannot say which one, or if it was the combination of the two.

As you may know, I think it’s super important for the advancement of medical knowledge for patients who do self-experiments (or just treatment variations, diets, etc) on themselves to record and publish those so we can build up a resource of patient’s real-world (and otherwise unrecorded) collective knowledge. This will help medical information to flow from patients up.

That’s my report for now, and I plan on publishing the 1500-word full report once I have rights to do so in December 2016.

In a comment he added: “Luckily the AJG now solicits these kind of studies via their “Red Section” which is dedicated to patient submissions. I’m not sure a lot of patients are submitting self-tracking study reports like this, but more should. And hopefully more journals are opening up to accept from patients even if they don’t have PhDs.” (Sean himself doesn’t – “just” a bachelor’s degree.)

I hadn’t heard of a journal having a section dedicated to patient submissions – how great! Why doesn’t everyone do that??