Home » e-Patient stories » Skeptics ask why patients would even WANT their medical images. We asked on Facebook.

Skeptics ask why patients would even WANT their medical images. We asked on Facebook.

Great update 20 months later: UCSF Hospital announced Jan 10, 2020 that they’ve made radiology images available through their MyChart portal, and Dr. Mark Kohli tweeted that it’s due to the speech that resulted from this blog post!

This is so exasperating. For years we at the Society for Participatory Medicine have been among the leaders of the movement for patients to have access to their medical records, in EMRs and everywhere. We’ve blogged repeatedly (and advocated in DC) about patient access to medical records and your HIPAA privacy and access rights, and we’ve been among the most vociferous advocates for the OpenNotes movement, where you get to see what your clinicians write in the computer. In every case we’ve won the argument, because everything we’ve said is just plain right (factually and ethically), and because every skeptical voice who doubted it was simply misinformed. And while we’re still beset with foot-dragging providers who resist sharing (sometimes for commercial benefit), the deniers have pretty much stopped their denial. 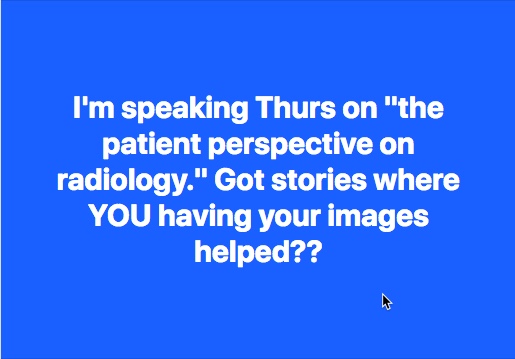 But now we have to start over with a faction of the healthcare industry – innovators, investors, health IT people – who have begun expressing the same doubts about our radiology images, and asking the same benighted, ignorant questions: “Why would patients want these? I wouldn’t want to see mine – that’s why I have doctors! Besides, patients aren’t radiologists – they can’t understand the images – so what would they even DO with them?”

Meanwhile, ACR, the American College of Radiology, is an association member of SPM, which suggests the profession itself has no doubt about the value of patients being well informed.

Questions like “Why would they even want them” are asked by people – perhaps well-intentioned, but uninformed – who’ve never had a problem that makes them worry about whether they, or their child, or a parent, will survive. It’s dangerous in healthcare to get advice from people who’ve never been in medical danger. Let patients help tell you what matters when everything is on the line.

(See Joe Biden’s impassioned speech two years ago about how infuriating it was to have his son Beau’s cancer treatment impeded by data mobility problems. When Epic’s Judy Faulkner later asked him scoffingly what he’d even do with his EMR data (sound familiar?) he said “None of your business!”)

Last week I gave the opening keynote at a radiology informatics conference, SIIM 2018 – the Society for Imaging Informatics in Medicine. Its theme was “Inspiring Collaboration,” and as SPM chair and co-founder Dr. Danny Sands often says, “How can patients participate if they can’t see what I see?” For examples, in preparation for the talk I asked on Facebook [image, right] whether anyone I know has a story of how having access to their radiology clearly made a difference. Wow, what responses. You can read the whole thread (some amazing tangents arose, btw), but here are my top highlights, in roughly chronological order as they came in. 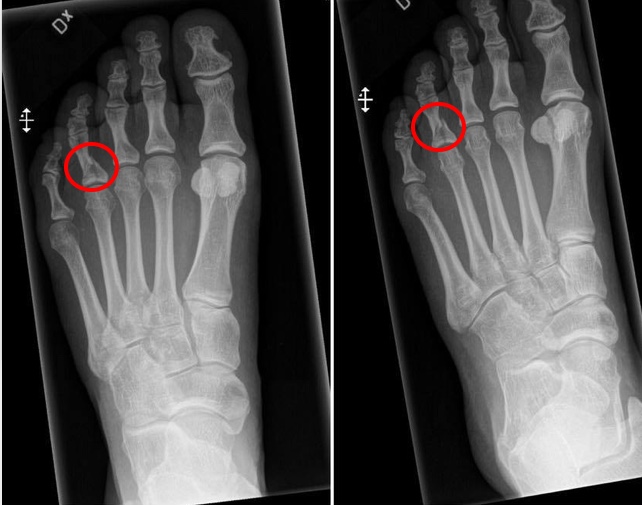 “10 days ago I injured a toe in a staircase, it was X-rayed last Monday and I was [simply] told I had a fracture. I asked for the images and after being persistent, I was told they would send a CD by post. It arrived last Friday and after downloading a DICOM viewer to export the images to jpg, I could show the scans to my chiropractor who gave me specific advice for selfcare that I didn’t get from the doctor.”

Seeing where the fracture was, the “chiropractor told me that I need to keep the toe taped with the next one for at least 4 weeks and wear shoes with a non-flexible sole. Also that I should try walking on it as much as I can.” I asked “that advice would not have been possible with just the finding ‘yup, it’s a fracture’?” She replied, “Correct, she first needed to know where the fracture was situated and what it looked like.” 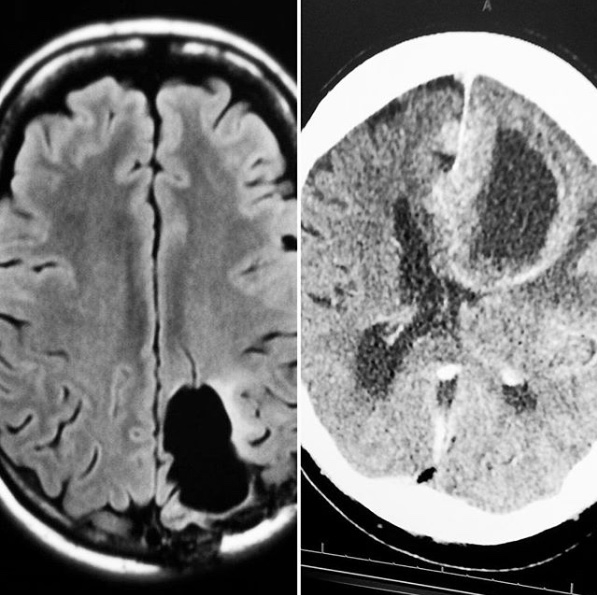 “I crowdsourced a glioblastoma diagnosis for my dad through Twitter using images from a CT scan [right – her “family portrait” – her own brain tumor on the left, Dad on the right]. He had a pacemaker and couldn’t have an MRI. He refused treatment so we couldn’t get tissue to confirm pathology. But the image was textbook glioblastoma. Neuro-radiologists on Twitter weighed in (conservatively) to help us make decisions. Results: 95% sure it was GBM, 5% chance there could be a weird brain infection.”

I replied noting that some skeptics will always say “But did that make any difference??” The question belies the unspoken assumption – by the ignorant – that radiology only involves yes-no questions in nice clear-cut situations. Liz’s answer: “My dad had expressive aphasia, couldn’t speak (though could understand), and was falling and having seizures. He didn’t want to prolong things. So knowing it was glioblastoma vs. a random infection was important.”

What a poignant illustration of how wrong it is to ask whether the informal diagnosis made any difference. It illustrates how just plain benighted it is to say “You can’t have your images unless you give me a reason that I think is valid”: it’s our data, and you have no idea what value we may find in it.

“I used them to tailor brain rehab. The neuroradiologist explained them. I also used them to change behavior. For the spine, SDM [shared decision making] and co-design of treatment. I looked at the places that were damaged and analyzed their function, That gave me an objective picture of how it influenced behavior; when I knew it was damage and not me I was able to change my behavior and actions and not feel ashamed. It has also helped with several other patients who all had the same experience, in this case knowledge was power!”

“For me, having my own images was life saving. As a brain tumor patient, I got acutely ill with migraines, vertigo – was misdiagnosed – my brain tumor had actually doubled in size – I had hydrocephalus. This was confirmed when I finally got a private pay MRI (I live in Canada). I asked for a CD copy of my MRI and was able to upload my images to my second opinion at Johns Hopkins. He was able to view my MRI, recommend immediate course of action – which involved me flying to the US next day. Straight into ICU. I have copies of every MRI/CT scan of mine.:-)”

“I learned how to read my images… and reports … many times over 16 years rib tumors were missed … I found them.

“Medical folks that don’t teach patients or try not to pass on records have egos way too big ….” Posted later on the SPM FB page

“Two summers ago I went on holiday in France. In an accident I broke two of my legs. When I got an x-ray in a local hospital I photographed those x-rays and sent them to my doctor in Holland. The next day I was able to travel back to Holland where I live and was operated one day later because they had those messaged x-rays so they could prepare.

“By sending over my French x-rays they could speed up the process, give me better advice (as the doctors in Holland know about my disease, the French did not + communication was difficult) and plan a sooner operation in Holland.” 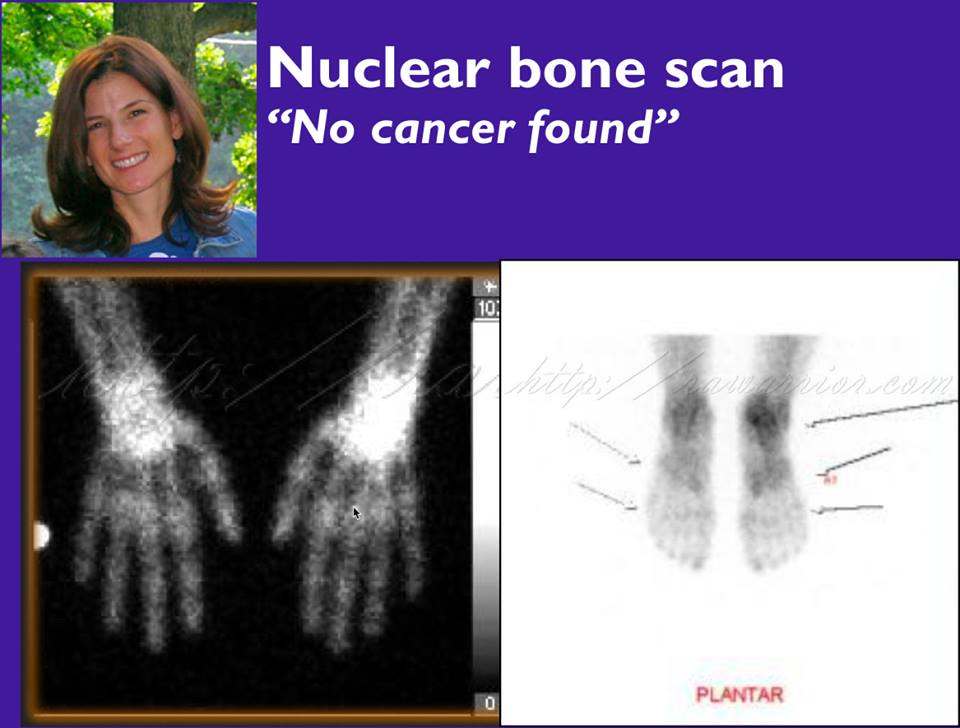 I must also mention Kelly, who was the last patient story I told in my TED Talk. She’d gotten a nuclear bone scan, which is usually used to look for cancer but in her case was looking for “hot spots” of inflammation. Somehow the radiologist ignored the indication (the problem they were looking for) and inappropriately said “no cancer found.” She got the images and saw the hot spots, indicating the inflammation that her doc had been denying.

“Every single one said “No portal vein visualized – CT angiography may be more helpful”. So I decided to google that sentence. That’s when I fell down the rabbit hole and discovered this rare condition called Abernethy Malformation (congenital absence of the portal vein) and the complications it can bring which fit my daughter’s complications perfectly. So I called the hepatologist and said we need a CT with contrast stat (of course gave him all the med journals I read about it) and 2 days later we had confirmation of Abernethy Malformation.”

As noted above, the American College of Radiology is an enthusiastic association member of our Society for Participatory Medicine, which as the name implies is about patient-clinician partnership. On this Facebook thread the ACR’s Becky Haines posted two relevant resources that further address the “What would a patient do with it?”

Again, these are only some of the anecdotes shared on that thread. If you read the whole thing (including sub-comments) you can see how many people have either improved outcomes by being informed and engaged, or have had the system fall short of its potential.

Our thinking above is not new, but beliefs and paradigms change slowly. All snark aside, please remember: leading physicians like Warner Slack (“patients are the most under-utilized resource”) and Tom Delbanco (OpenNotes, Healthcare in a Land Called PeoplePower) have spoken since the last century of patient power enabled by data. Similarly, our society was founded by friends of “Doc Tom” Ferguson, who first documented e-patients in the BMJ in 2004, saying:

The emerging world of the e-patient cannot be fully understood and appreciated in the context of pre-internet medical constructs.

That was before the first smartphone, and before the iPad and other tablets and nearly ubiquitous wifi changed the presence of data in our lives – and the expectation of holding our data in our hands. Then in 2012, in Best Care at Lower Cost, the Institute of Medicine wrote (Table S-2) that one of the four cornerstones of the future of healthcare was (their exact words) “Patient-clinician partnerships” with “Engaged, empowered patients.”

Think again about Dr. Slack’s remark – as far back as the1970s – that patients are the most underused resource in healthcare. Please don’t perpetuate that by limiting patient access to case information. In everything you do and design for the future of healthcare, please err on the side of letting patients contribute to the future of care.

And a PS from the inventor of the Web

In that same TED Talk I recounted how Tim Berners-Lee himself – inventor of the Web – spoke at TED2009 and told the audience:

Practice that. It’s important because you have no idea the number of excuses people come up with to hang onto their data [the data they were paid to generate] and not give it to you,