Home » Shared Decision-Making » practice variation » Whither Cochrane, for e-patients and everyone else?

Whither Cochrane, for e-patients and everyone else? 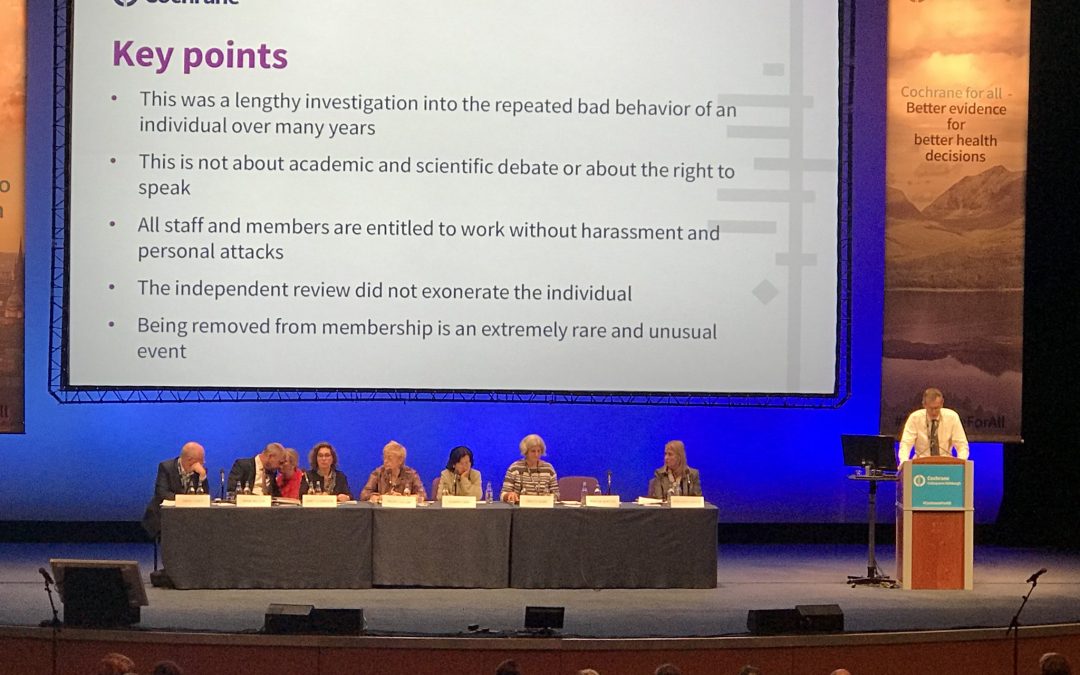 This will be the third, and last, in my short series on attending the Cochrane Colloquium in Edinburgh in September of this year. In the first post, I talked about what that conference was like; in the second, I shared an overview of Cochrane as a global movement to make medical evidence work better for clinicians, patients, and communities around the world. This last one will talk about some of the issues Cochrane is facing, as an organization and as a proponent of science in a world that seems to have a rising suspicion of science and research. 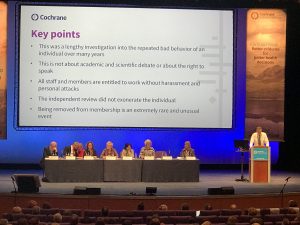 I watched the Cochrane Colloquium open not just with a welcome to Edinburgh – although there was that, in spades – but with a behind-the-scenes PR flame war that wound up sucking up the the headline space for Cochrane that week, and in the weeks since. I talked about it in my podcast the following week, and have watched the conversation go by since my first day on the ground at the Edinburgh International Convention Center. The short-snort version of what happened is this:

I’m a professional communicator, so I’m amazed that Cochrane let the guy they were drop-kicking get the story out first. That’s PR 101 – s/he who gets the story out first owns the narrative. When the drop-kickee got the first announcement out, Cochrane was left in damage control mode, with neither side fleshing out any of the details regarding the “behavior” that led to the drop-kick. The social exhaust of that damage control continues to waft across the landscape. Cochrane will most certainly survive, and I hope that they learned from this series of unfortunate events. Crisis communications planning is totally a thing – a thing I recommend every organization and enterprise get savvy to.

My point? Science is as messy a business as any other human endeavor. As soon as you think you’ve got your hands, and your mind, wrapped around something … it squirrels away, and changes the entire question. Add human behavior and emotion, and stuff can flame up quickly.

Here’s my suggestion: Cochrane needs more ground-level troops – the ones called “patients,” or “citizen scientists,” or just “people” – to participate in the scientific inquiry that forms the body of their work. This is true across all scientific fields, but it’s particularly true in medical science. Human health and care is the ultimate purpose of all medical research, which means that having people/patients included in that work is critical. Much of the “science denial” hooey behind stuff like the anti-vaxx movement and the silliness that is anything Mehmet Oz says, or Gwyneth Paltrow ditto, is rooted in the giant castle walls that have separated people from Important Work In Science with paywalls, and the mindset that said “doctor knows best” when it came to medical practice. But those castle walls are being stormed on the regular since the democratization of knowledge and access to information that arrived when Tim Berners-Lee came up with the World Wide Web at CERN back in 1989.

Medical science is threaded through with uncertainty. Intuition, hypothesis, testing that hypothesis, analyzing results … lather, rinse, repeat. Getting citizen scientists and front line clinicians involved in the creation, analysis, and compilation of the science that informs how humans get and/or stay healthy is a civil/human rights issue, as well as an acceleration-of-discovery play. Paternalism can’t run the table any more. There also has to be an ongoing, robust discussion of that science: is it trustworthy, who paid for it, how much implicit bias was either included or removed, how can population-level science intersect with n-of-1 precision medicine, the 21st century medical science unicorn? Everybody in, nobody out, bring on the inevitable arguments. Scientific papers are basically arguments – don’t be afraid of conflict, from conflict can come consensus, alignment, and progress. Participatory science, it can totally be a thing.

Whither Cochrane? I think it’s up to us, the citizens of the world who care about making healthcare better for everyone. Let’s get to work.