A landmark day in the movement: Patients in the Front Row 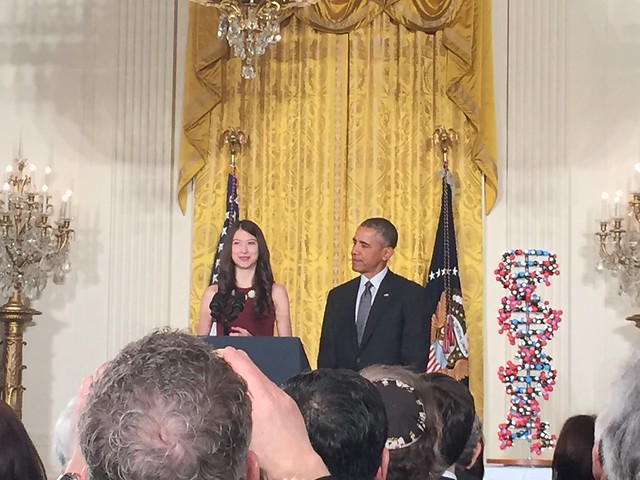 Last Friday, 200 patients, advocates, scientists, doctors and researchers gathered at the White House to hear President Obama’s launch of the Precision Medicine Initiative. According to the President, precision medicine aims to tailor treatments to each individual. President Obama likened precision medicine to how we match blood transfusions to blood type – only now we should aim to match a wide range of treatments to a wide range of varying genetic and biounique markers.

The initiative begins with a budget request for $215 Million in new funds. The funds will be used, mainly at the NIH, to:

But, what was remarkable about the day — in addition to the announcement which means a great deal to a great many — was the composition of the room and the event.

After most of the invited guests were seated (and selfies of the presidential podium were taken), approximately 20 more VIPs were escorted in to the front rows of the East Room.

They were patients, or families of patients.

During his remarks the President introduced several of the patients, all of whom had benefited or stood to benefit from precision medicine.

“Most importantly we’ve invited patients, who have the most at stake” – @barackobama @WhiteHouse #PrecisionMedicine

And he didn’t stop there, announcing: “patients and advocates won’t be on the sideline, they’ll help us design [precision medicine research]”.

“Patients and advocates won’t be on the sideline. They’ll help us design this ” – @BarackObama @WhiteHouse #PrecisionMedicine

Precision medicine, a term which could come to encompass a broad range of treatment and research options. Perhaps one of the most significant aspects of the initiative, for ePatients and open data proponents, is the proposal for an open cohort of donated health data. If the NIH is successful in sourcing over a million participants, the richness of the data could prove to reduce the discovery and cycle time for personalized treatments significantly.

Later in the day, during an informal discussion, head of the National Institute of Health, Dr. Francis Collins, remarked: “Really, I want to stop using the word patient. It’s participants. This is about being participatory in the process.”

Yep, that’s pretty much the biggest day in the history of the Movement!

Postscript: later we learned that two other SPM members were invited to be present, so of the 2oo in attendance, three were SPM members! Erin Keeley Moore, who’s posted twice on this blog, and Donna Cryer, one of our newly elected board members, were there too. — e-Patient Dave