Judy Feder is an e-patient who has contributed several comments here in the past. But it was just today that I learned what an extraordinary new e-patient chapter has unfolded in her life in the past few months. If you’re a student of the e-patient principles, see how much e-patient you can spot in this story. — e-Patient Dave 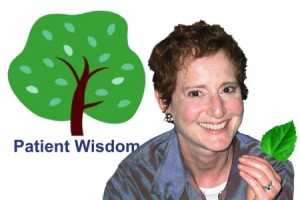 I’ve been an e-patient for seven years, three months and two weeks – two weeks less than I’ve been (knowingly) living with breast cancer that had already metastasized to my lungs (and later liver) at diagnosis. Like countless cancer patients before me, I blessed the friend who turned me on to Gilles’ amazing ACOR, and the group with a name that would make only a Stage IV girl laugh: “Club-Mets.” (In the intervening years, I’ve become more of a lurker on Club-Mets; more of an activist on BCmets, a tale for another time.)

If for no other reason, I love my e-community because I can sound off about the shortcomings of cancer vocabulary. I’m not Judy, fifty-something mother of Eliel and Eero, communications consultant, serious amateur musician, etc. I’m a “heavily pre-treated pt.” The cocktails I’ve been on (at least since the 2004 spread to my liver) are not life-saving medicines, but “salvage therapies.” Please.

Today, however, I can tell you that I love my e-community because I would not be alive without it. No joke. Here is a quote from my PET-CT of December 30, 2008: “left lobe of liver extremely enlarged and almost completely replaced by tumor…very marked progression of metastatic disease.” As of September, 2008, this heavily pre-treated pt had gotten to the point when regimens were failing with growing frequency, and options (salvage or otherwise) were increasingly limited.

Two postings on BCmets caught my eye. The first told of an internal radiation therapy that delivered Y-90 seeds directly to the liver. My onc had previously passed on radiofrequency ablation, but she’s gotten more and more experimental as my “on-label” options have dwindled. We pulled what literature was available, and she gave me her blessing. Of course, it then took me about 10 precious weeks to actually get my right lobe under the knife, but I probably had an easier time than many figuring out where to go and how to hassle the insurance company enough to cough up the money.

The second posting mentioned a blood test for determining the presence of the Her2/neu oncogene, which in turn determines a BC patient’s eligibility for the monoclonal antibody Herceptin. Seven years in, and I’d never heard of this blood test. The standard of care (i.e., what insurance will pay for) is the tissue biopsy, and mine had always been negative. Yet, my own observation of scores of fellow e-patients who were Her2 positive made me suspect that my cancer over-expressed Her2. My cancer is erratic, stubborn, variable in its response. I really wanted that Her2 blood test, insurance be damned. Despite the fact that the “official” evidence is limited to: “several reports also show that elevated levels of serum HER-2/neu can occur in women with metastatic breast cancer that had primary breast tumors that were negative for HER-2/neu expression by immunohistochemistry” (http://www.oncogene.com/ivd_details.php?pc=06489876&type=IVD), again my onc agreed.

When the results came back positive, you’d have thought I’d won the lottery. That was in mid-October. My onc asked me to repeat the test for good measure. I was nervous, but agreed. At any rate, I was on a chemo hiatus as I waited for the Y-90 treatment to take place. The second test showed an even stronger positive. That knowledge alone sustained me through a pretty tough recovery from the radiation, and the simultaneous explosion of cancer in every part of my lungs and liver except the lobe where I’d gotten the Y-90. By January, still recovering, I had to go on pain management for the first time in my cancer saga. The tumors in my left lobe and along the gastro-hepatic ligament were not only palpable, they were visible to the naked eye. My liver enzymes were dangerously elevated. I was one sick heavily pre-treated pt.

On Thursday, I’ll begin my third cycle of Herceptin and Navelbine. My enzyme and tumor marker levels have declined dramatically, as has my swollen and painful liver. I’m almost off of the pain meds and about delirious with joy. When my onc did a physical exam two weeks ago, she burst into tears. Not only am I alive and healing because of the wisdom of my fellow patients on BCmets, but I’ve opened up a new avenue for other women with BC mets in my doctor’s practice (and, with e-patient power, well beyond, I hope). When I think about how my journey might have differed had I been on Herceptin since the outset, it’s almost impossible to imagine. I’m just incredibly grateful that I figured out a way to add it to my (NOT)salvage therapy as of January 25, 2009.