Federal agencies can, and should, be the first responders to health questions. Social media can help.

That’s my summary of presentations from last week’s National Conference on Health Communication, Marketing and Media conference, where I had the sense, once again, of a tribal meeting, but this one had the urgency of war council. The enemy is legion: flu virus and Salmonella, yes, but also misinformation and misunderstanding.

I was on the edge of my seat for most of the conference (OK, yeah, I am a health geek):

Unfortunately, the full program is only available as a PDF, making it hard for you to confirm this, but believe me, it was an extraordinary event (check the #NCHCMM09 Tweets for proof).

Janice Nall of the National Center for Health Marketing at the CDC moderated a panel on social media’s promise for public health which included me, Jeff Lee of Distributive Networks, and Bob McKinnon of YELLOWBRICKROAD Communications.

Nall kicked things off by talking about Social Media at CDC, which lists all their initiatives, from Twitter and Flickr to MySpace and Second Life. Between April-August 2009, their H1N1 flu-related videos have been viewed over 2 million times, they amassed over 700,000 Twitter followers, and 17.19 million people subscribed to their H1N1 RSS feed.

When it was my turn, I held up two symbols of a possible future for public health campaigns: a tube of sunscreen and my mobile phone. 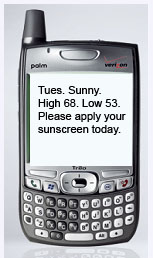 The Center for Connected Health conducted a randomized trial in 2008 using text messaging to send a daily weather report and reminder to apply sunscreen. The control group did not receive any reminders. Everyone got a tube of sunscreen with a monitor strapped onto it so every time the cap was removed, a text message was sent back to the researchers.  Study participants who received text reminders applied the sunscreen an average of 56% of the time, compared with the control group, which had a mean daily adherence rate of 30%.

With 85% of American adults carrying cell phones these days, it is time to think about how mobile, social technology can help public health officials do their jobs.

My role on a panel is often to provide baseline data that can serve as the context for the discussion. Here’s what I chose this time:

The Pew Internet Project estimates that 79% of American adults use the internet and many of them not only gather and share health information online, but make health decisions based on what they find (see the Pew Internet/California HealthCare Foundation report: The Social Life of Health Information).

56% of American adults have accessed the internet via a wireless connection, whether that’s on a laptop, desktop, mobile device, game console, or Kindle – we included all of those in our definition (see report: Wireless Internet Use).

Wireless internet access has created the state of being “always connected.” The consequence is that mobile is changing us, once again, as internet users.

It turns out that about 4 in 10 adults are what we call Motivated by Mobility. Mobile access creates a “continual information exchange” that feeds on itself and reinforces collaborative behavior.

For some mobile access is a supplement. For others it’s their daily bread.

Over the last few years we have been tracking the rise of wireless internet access, noticing significant differences between African American and white adults.  Our recent survey confirmed it: African Americans are the most active users of the mobile internet.

48% of African American adults have gone online using a mobile device, compared with 28% of white adults.

This survey was conducted only in English so the Latino sample skews up in terms of education and income, which means we see a higher than normal rate of technology uptake: 47% of Latino adults have gone online using a mobile device.

Differences between whites and African Americans are erased when we redefine internet access to include mobile access.

The consequence of this increased bandwidth and mobility is that these users are more likely than other adults to access health information online.

The vast majority of people with a health question want to consult a health professional. The second most popular choice is friends and family. Third choice: the internet and books. As we saw in the Healthfinder.gov panel at the conference, low-literacy populations prefer to print out information. They are not likely to read on-screen. It is important to keep that option available.

But many e-patients are using the internet in new ways. Some are going online to connect, in fact, with what we think of as traditional sources: health professionals, friends, and family members.

Technology can enable the human connection in health care.

Here are two examples of mobile, social technology and the democratization of health information.

The first example is PatientsLikeMe, a social network for people living with chronic conditions.

(By the way, Pew Internet surveys find that 35% of adults use social network sites like MySpace, Facebook, and LinkedIn. If you have not yet joined one of these sites, don’t hesitate. Seeing how these sites work will be as revolutionary as the first time you saw the Web.)

PatientsLikeMe is more like an information network than a social network since they are helping people to record the observations of daily living which can inform someone’s treatment. But they network those records so fellow patients can benefit from other people’s data.

Peer to peer advice turns out to be powerful and influential. A survey of HIV community members on PatientsLikeMe found that two-thirds of respondents said they are more knowledgeable about risks and benefits of a “treatment holiday” because of what they have learned from other users at PatientsLikeMe. Seven in ten said using PLM has increased their interest in results of tests ordered by the doctor treating their HIV.

These patients are under the care of health professionals, but exchanging data, insights, and information to take better care of themselves.

Back to Pew Internet’s survey, we found that 41% of e-patients have read someone else’s commentary or experience about health or medical issues on an online news group, website, or blog.  The “just in time someone like me” is often a significant source of health information – how can public health campaigns be tailored to take advantage of this trend?

The second example is the text message campaign created by Connected Health. The messages were nothing fancy, just a weather report and a reminder to apply sunscreen, yet they increased adherence.  What other reminders or alerts can be sent via text messages? How can you enable the sharing of those messages?

My conclusion: 8 in 10 adults have the basic capacity to receive a public health message. Figure out how to take advantage of that reality. But also keep in mind the 15% of adults who are “truly disconnected” – not only are they offline in an online world, but they are likely to say they don’t even know anyone who is online. They are down in a pocket, far away from the world of smart phones, and yet they are part of our future, too.

Jeff Lee of Distributive Networks then gave a very engaging presentation about how the Obama campaign harnessed their followers’ passion using ringtones, Zip code-targeted text messages, and other calls to action. He called SMS the FedEx of communications – messages are opened immediately. But he urged public health leaders to use mobile apps to push people toward deeper content on the Web or even a call-in center.

The take-aways I wrote down:

Bob McKinnon of YELLOWBRICKROAD switched gears by quoting Ralph Waldo Emerson’s dour perspective on technology, the gist of which can be summarized with this short quote:

The harm of improved technology may balance out its good.

I don’t have his slides, but I scribbled madly as McKinnon warned:

With that, I’ll encourage you to take a small step and write a comment: