“OpenNotes” project begins: what happens when patients can see the physician’s visit notes?

The opening anecdote of the e-patient white paper tells of a patient who impersonated a doctor in 1994, to get his hands on an article about an operation he was about to have. He got busted. Two years later episode 139 of Seinfeld had something similar – Kramer impersonates a doctor to try to get Elaine’s medical record: (Click to watch it on YouTube; they won’t allow embedding on other sites.) 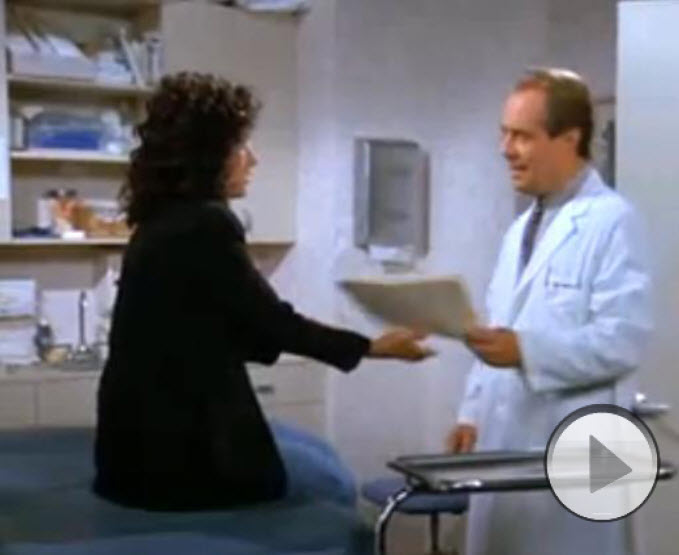 It aired October 17, 1996. It was a turning point in American healthcare: eight weeks earlier the Health Insurance Portability and Accountability Act (HIPAA) had been signed into law, but the full regulations had not yet been written, so when this aired Elaine did not have a legal right to look at her record.

Today she does, though as we’ve written here (sample post from January, & comments), it’s often difficult. Plus, HIPAA regulations allow 30-60 days for providers to deliver, and states can set whatever price they want for the copies. (Regina Holliday was famously told her husband’s records would cost 73 cents a page.) But at least there’s a legal right.

Now, the Robert Wood Johnson Foundation (RWJF) is funding a study called OpenNotes to explore taking it a big step further: what happens if patients can see, online, every last bit of what their doctors wrote? Do doctors get overwhelmed with questions? Do patients freak out when they read the ucky medical words that doctors write? Does the world go to hell in a handbasket, as some have worried aloud?

A year ago the Boston Globe voiced those concerns in the lead of an article announcing OpenNotes. Shades of Elaine:

One doctor wrote that a patient was acting paranoid. Another typed that she had ordered tests to make sure a patient didn’t have cancer. Such notes, written in a patient’s medical records after an appointment, can be candid and blunt – at times more so than doctors are to patients face-to-face.

Amid the national push to computerize medical records and make them more open to patients, one of the most intense areas of debate is whether patients should be allowed to see their doctors’ notes online.

With patients across the country voicing a growing desire for greater engagement in and control over their medical care, a new study involving patients in Boston, Pennsylvania and Seattle will examine the impact of adding a new layer of openness to a traditionally one-sided element of the doctor-patient relationship—the notes that doctors record during and after patients’ visits.

Funded through a $1.4 million grant from the Robert Wood Johnson Foundation (RWJF) Pioneer Portfolio—which supports innovative ideas and projects that may lead to important breakthroughs in health and health care—the 12-month OpenNotes© project will evaluate the impact on both patients and physicians of sharing, through online medical record portals, the comments and observations made by physicians after each patient encounter. Approximately 100 primary care physicians and 25,000 patients at Beth Israel Deaconess Medical Center (BIDMC) in Boston, Geisinger Health System in Pennsylvania, and Harborview Medical Center in Seattle will participate in the 12-month trial.

I spoke this week about the project with RWJF’s Steve Downs. My view has always been that of course I should be able to see my records: whose data is it, anyway? But Steve points out, correctly, that you can’t shove culture change down people’s throats, so RWJF is spending big bucks to collect evidence.

To the credit of everyone involved, they’re allowing us participants to blog and chat about our participation: “Somebody might come up with good uses for the notes that we haven’t anticipated.” Hallelujah; that’s Web 2.0 / participatory thinking.

The project went live just before my already-scheduled visit this week with Dr. Sands. I’m writing this before I go online to review those visit notes. If I have anything to say, I’ll say it here.

I encourage you to read those short pieces linked above. They’re informative and thought-provoking.

p.s. It’s fitting that this project is funded by Robert Wood Johnson: they also provided the original funding for our founder “Doc Tom” Ferguson to write that white paper. And look where we are now.