Home » General » Why Sometimes Health Reporting Should be Done By Journalists

Why Sometimes Health Reporting Should be Done By Journalists 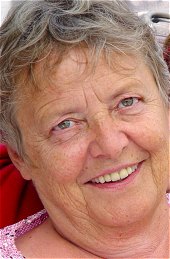 I’m all for citizen journalism, and can even stand the content mills like LiveStrong, who have pimped out their name and brand in order to make a quick buck.

But I draw the line with bad reporting and worse, biased representation of the data to prove a point.

Case in point — the blood test for Alzheimer’s disease. The culprit — “Singularity Hub,” a website overseen by apparently a former hardware engineer at Google.

The piece in question is written by Peter Murray, who has a Ph.D. in neuroscience, and is entitled, Scientists Develop Blood Test To Detect Alzheimer’s Disease Before Patients Even Show Symptoms.

Based upon an initial study of just 273 subjects, the claim is that now Alzheimer’s can be diagnosed through a simple blood test. If you actually read the article all the way to the bottom, you’ll see the author finally note the limitations of the current study, “There’s still some ground to cover before the current test can be used in clinics, however. The announcement by Burnham and her colleagues is based on a single study.” Yes, indeed. Science isn’t science until it’s replicated by other, independent researchers with other subjects. That is Science 101.

But like much of the health reporting today, where every finding is labeled as a “breakthrough” or “important milestone,” consumers have no real context of where to put a study like this. Health reporters are supposed to help provide that context.

Beyond the lack of context, and the wide-eyed, unquestioning enthusiasm for the new study’s findings, Murray also suggests that blood tests are the only real way to determine a clinical diagnosis of things like Alzheimer’s disease, which is actually classified as a mental disorder. Notwithstanding the fact that mental disorders have been accurately diagnosed for decades now with objective diagnostic criteria through a simple interview.

The real tragedy of this article is the prominent graph in the middle of the article, “Changes in Selected Causes of Death, 2000-2008.” While technically accurate, it is not really the data you should be interested in: 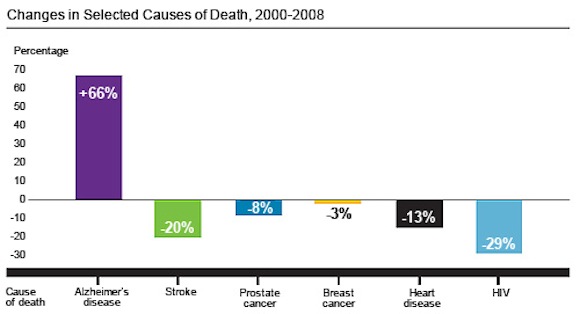 Who cares about the specific numbers, when over nearly a decade, the population has also grown? People who don’t understand statistics will look at whole numbers of people like this and forget that in 2000, the population was 281 million, while in 2008 it was 305 million — an 8.5 percent increase. (Those 65 and older, however, have basically remained the same at about 13 percent of the population.)

Why did the author not provide the proper statistical data in this article? Who knows, but this is what an excerpt of that data graph should look like had it been properly presented (I used 2009 data, since that is the most recent data available from the CDC):

That’s a pretty big difference, cutting the rise of Alzheimer’s disease more than half from the previous graph. Something that misrepresents data by more than half is a pretty serious journalistic gaffe.

You may notice the gains we’ve made against other common causes of death such as stroke and heart disease are significant over the past decade. You rarely hear about this sort of context in health news stories anywhere, but it’s a sign of significant progress.

You’ll also notice that something like HIV, which is not among the top 10 leading causes of death in the U.S., does not appear on the new graph. And there’s no reason to partition off different kinds of cancer into separate categories. Other common health problems we hear a lot about — like diabetes — also enjoyed a decline in the same time period (in diabetes’ case, it’s a 21% decrease).

I think it’s great when neuroscientists report on the latest research findings with a common disease like Alzheimer’s. I just hope they do in a way that represents the data accurately, and in a context that is unbiased and not a part of the disease-mongering that has become commonplace amongst mainstream journalism.