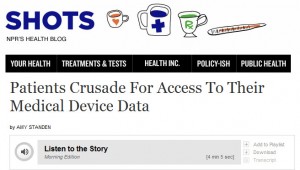 Quick update before I go out and play: SPM member @AfternoonNapper just notified me that two more of us, Katherine Kelly Leon and Sharonne Hayes MD, are also on NPR today! Patients Find Each Other Online To Jump-Start Medical Research

I awoke this holiday morning to a Google Alert that, when clicked, brought tears to my eyes. For the first time in the national media, I heard this, on NPR’s  “Morning Edition”:

… a growing movement of people who call themselves “e-patients.”

Yes! And, befitting a movement, the episode even includes a protest song … adapted from the Civil Rights movement of the 1960s. More on this in a moment.

The episode (Patients Crusade For Access To Their Medical Device Data), by KQED Producer Amy Standen, is the latest on ICD patient Hugo Campos, who’s appeared on this blog many times for his advocacy to get his device’s data. The segment is also blogged, with different text and video links, on NPR’s health blog, “Shots.”

Why Hugo wants his data: he’s an engaged patient

I understand that to the device maker (Medtronic), it’s enough that their product rescues him when he has an episode, i.e. almost dies. But Hugo’s an e-patient – engaged in his care, empowered to be proactive about his health – and he’d rather prevent episodes. To do this he must know what’s going on before trouble arises.

Anti-lock brakes are an imperfect but useful metaphor. It’s great that they save you when trouble hits, but isn’t it even better to teach drivers how to stay out of trouble?  Teach them, “When conditions are slippery you need to be careful?” It’s easy to tell when the road is wet, but without data, there’s no way for Hugo to know when he’s headed for trouble. That’s disempowering; it makes him dependent.

He says it’s not at all reassuring to learn hours or months later how the device kept him from “running off the road” – he’d rather be better controlled in the first place. These episodes are scary, for good reason – in the audio Hugo relates what it’s like in the instants when you realize you’re collapsing from a failed heart:

The silly things that go through our minds – like, “Where am I gonna fall?? This ground here is filthy.” … My reaction was to maybe call my partner, or to let somebody know [where I was]… but there’s no time. It’s just… too fast. You’re shutting down.

The power of real-time information

Hugo’s proactive enough that, as he describes in his TEDx Cambridge talk, he logs his own episodes on his iPhone, and he figured out that scotch whiskey gives him atrial fibrillation. So now he doesn’t drink scotch, and avoids this kind of episode.

Imagine what he could do if he could number-crunch the raw data stream collected by his implanted gadget. Heck, someday Medtronic might even be able to show that their device doesn’t just save lives, it helps patients achieve longer event-free intervals. Now that’s value.

So often when I speak at policy meetings, or read medical magazines, I hear complaints about how irresponsible patients are. (Example: the Health Leaders cover story “engaging the patient” last October led with this choice tidbit: “In our annual Industry Survey, leaders cite patient noncompliance and lack of responsibility as the fifth-greatest driver of healthcare costs at their organizations.”)

Well, for heaven’s sake, people, I know some patients are slugs – but look what happens when an e-patient tries to do everything in his power to stay healthy. Let Patients Help. Who knows, others might even realize they have more ability than they thought – and get engaged.

“It Isn’t Nice”: is “gimme my damn data” becoming a civil rights issue?

On May 17 at a meeting of the Kanter Learning Health System at the National Press Club, I noticed SPM’s “artist in residence” Regina Holliday painting in the back of the room, and said, “You know a movement’s becoming a revolution when the artists and musicians show up.” I cited recent songs by Ross Martin, such as his after-hours garage band’s fun Blue Suede Shoes takeoff, and I even sang a line.:-)

Reynolds’ “It Isn’t Nice” cheerily explained why protesters were doing such “not nice” things as staging sit-ins: “It isn’t nice to block the doorway, it isn’t nice to go to jail. There are nicer ways to do it, but the nice ways always fail. … If that is freedom’s price, we don’t mind.”  Hugo’s version flips it to be about his data being kept from him: “It isn’t nice to grab my data… then to hog it, keep it from me.”

How interesting that the e-patient movement is starting to be seen in a civil rights context. After all, HIPAA – the law whose regulations give us the legal right to our medical record – is a civil rights bill, and violations are administered by the Office of Civil Rights. And a few weeks ago SPM member Michael Millenson MD wondered if Regina will emerge as healthcare’s analog to Rosa Parks.

I’m starting to wonder: what right is more civil than the right to do all we can to maintain our families’ health?