I thought I’d give some background on why we did the study and a few key take-aways.

30% of U.S. adults are currently caring for a loved one and it cuts across most demographic groups. We all have a good chance of playing that role some day.

As a researcher, I try to identify “lead users” of technology because it’s a shortcut to insights about the future. I spend a lot of time talking with people living with rare disease, for example, as well as moms of young kids with health issues because I see them as the alpha geeks of social tech in health (to borrow Tim O’Reilly’s phrase). Caregivers fit in to that category since they are on the front lines of health care (holding the system together like duct tape, as MaryAnne Sterling puts it).

I wasn’t surprised to see that caregivers are more likely to seek info on dementia or long-term care. That’s intuitive. But look at the margins on some of the other topics we included in the survey: 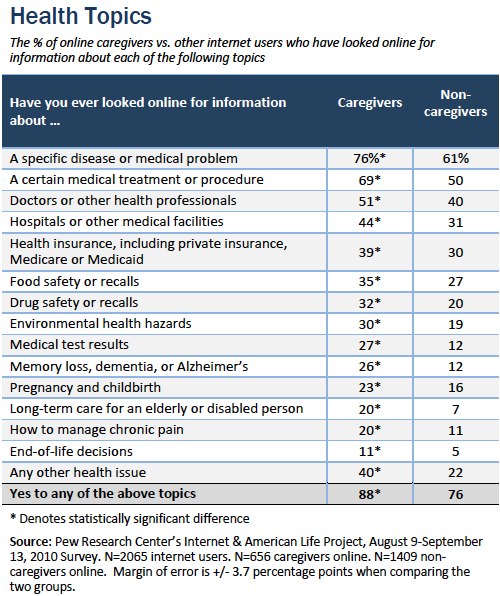 Caregivers do their health care homework

One surprise for me was how actively caregivers seek out health care reviews and ratings. As an example, they are the most likely group to look at drug reviews online – 38% vs. 18% of other internet users. And it’s not just because of their other demographic characteristics. We identified a “caregiver difference” in the data. This has implications for health care providers and businesses seeking to reach an aging population – caregivers might be their best target market.

We are at the beginning of a serious aging trend in the U.S. and at the beginning of a trend toward asking people to act more like consumers. There are going to be more elders in need and more health care choices in the coming years. This research shows that their loved ones not only shoulder the responsibility for physical care-taking, but for decision-making, too.

Caregivers know how to network

Another aspect I loved reporting was how social caregivers are when it comes to seeking help from friends, family, and people who are in the same health situation. Details are in the report section entitled “In the moment of need.” For example, 70% of caregivers say that the last time they had a health issue they turned to their friends and family members, either online or offline. By contrast, 47% of non-caregivers did so.