“The Patient as Partner” in Medical Research at Radboud University 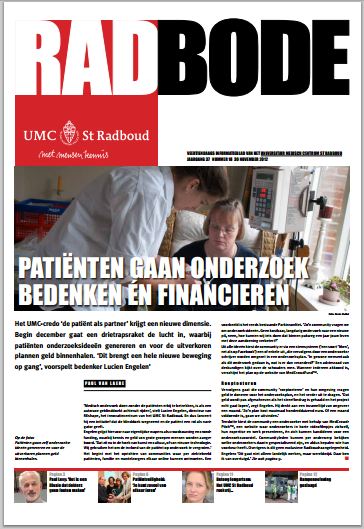 This encouraging news is adapted from the November cover story of Radboud University’s magazine Radbode (PDF, in Dutch, 1.6MB). Thanks to @LucienEngelen, initiator of this project, for forwarding it to us. Not surprisingly, Lucien’s also the creator of the heavily patient-centric Future of Health conferences, which started with TEDx Maastricht 2011.

Editorial note: I heavily edited this, distilling an internal “cheerleading” article down into the concepts that I want to draw attention to. This is a dicey task, since we get pitched all the time with requests to promote one idea or another. But I’ve never seen one that’s so outside the mainstream, in ways that are so aligned with the goals of our Society as often expressed on this site: Doc Tom’s vision of letting patients help heal healthcare.

All editorial criticism should be directed to me, but I’d prefer to have discussion stick to the issues described here. And if you know of similar initiatives elsewhere, please share in the comments.

The mission statement of the Radboud University Medical Center in the Netherlands is “The patient as a partner.” This month they began launching a suite of three non-profits (“a

threefold rocket,” they say) where patients and their families and caregivers will come up with research ideas then try to raise the money for selected ideas.

Lucien says “Doing medical research without the cooperation of patients is like car-racing backwards blindfolded. The idea is to take away the blindfold and give the patient the role of navigator.”

That resonates strongly with our Society’s definition of participatory medicine: “patients shift from being mere passengers to responsible drivers.” In a sense, this even extends it to patients directing the design or maintenance plans!

The article continues: “The idea uses ‘weapons’ of our time like crowdsourcing and crowdfunding. … knowledge and money from large amounts of people could be activated.” That sounds exactly like the landmark book Reinventing Discovery (Amazon), which ACOR & SPM founder Gilles Frydman recently steered me to. “These weapons are currently used in the fields of art and culture, as well the new technology and communications scene. We are going to use them to increase the influence of patients on research.”

It will start with the creation of online communities where patients, family and homecarers can meet, share ideas and discuss questions about one type of disease. One such existing community is ParkinsonNet. “We will ask communities like those for ideas for research. Let’s face it THEY are the experts in HAVING the disease. We don’t ask for costly, long-term research questions for new medication, no, we ask the patients how we could do something that will improve their daily life, let’s say within a year?”

From of all the ideas that come up in the community they themselves will choose through a voting system (similar to “liking” on Facebook) and for a starter the top three ideas will be molded into a research plan by a research writer. Actually two plans – one for submitting for grants, the other in plain language: what will have changed after the research has been done, to use in raising donations from their own communities.

An advisory board will look at the research plan as well to make sure that all research standards are being met. Sometimes this advisory board will be broadened with experts in the specific field. When all involved agree, the plan will appear on the website of MedCrowdFund™ (currently only on Facebook).

After the publication of the plan the community will start to “Sing around” in their communities like family, work, friends asking others to donate money to actually start doing this research. They will also ask their connections to spread the word. “The money will only be withdrawn when the needed amount is reached and the project will really start,” according to Engelen. “We expect the maximum size of the aimed research will approximately €100,000. Smaller projects will in no way be less important, but we’ll have to see what happens. It has never been done before – patients designing their own research, funding it and guiding the process themselves.”

Step 3: Researchers applying to do the patients’ proposals

Finally the community will choose a researcher with the help of MedCrowdPitch.org™, a website where researchers profile themselves and their expertise in a video clip, and where they can candidate themselves for a research plan. Community members can see per subject which researchers are specialists in the field, and thus decide who they prefer. “We expect this to be a global operation in the end – there’s no fence around the internet ;-).”

“Academic institutions do research for people, not with people,” is the conclusion of Gert Westert of IQ-healthcare. “REshape wants to involve patients more in research, I really like that.”

The Dean of the University, Paul Smits, also likes the idea. “It brings science into the living room.” We have to be careful though that this will not be done at the expense of fundamental research, says the Dean. Engelen expects this to be a different area also on the level of funding.

“The fundraisers and the medical researchers knew how to find one another. That yields a lot of research but the question whether patients benefit from this research on short notice must be asked.” Professor Gert Westert, head of IQ Healthcare, one of the leading quality research institutions of the world, has his doubts:

Take chronic diseases for example. To patients it matters how to live with a chronic disease, but research focuses on the cause and how to prevent a disease. Do we have to target all the available money for dementia research on searching for the mechanisms behind the decay of the brain? Or should we listen to patients and their relatives to find out what we can do for them as well?

Mind you I’m not arguing that the lab research shouldn’t be done, but we need to find a balance, the right balance in fundamental and applied research. Nowadays the balance is hard to find sometimes.

According to Westert patients are well capable of pointing at places where things can be improved in healthcare, especially the ones with a chronic disease. “Of course, patients differ. But a fair amount of the chronic disease patients can point perfectly at the problems and important facts in healthcare research.”

“The power of the patient is given a central place … and that is very important,” says the Dean and vice chair of the Board of the Radboud University Medical Center, professor dr. Paul Smits. “Patients know very well where we have to head for in the short term. I expect a lot of ideas for applied research. On the other hand as a University Hospital we cannot neglect fundamental research, that starts with molecules and cells. Otherwise you will lose touch with fundamental research in the long run.”

Through MedCrowdPitch patients can choose researchers by watching video clips. In these clips the researchers promote and present themselves and the research that they have been doing. “This is how we stimulate the researchers to give a sharp profile of themselves. That is what we need. To me it is also about being accountable for the work that you have been doing with (often) public money. There is more to it than publishing a paper, in my opinion,” says Engelen.

“It is important that we are being provoked to make a good impression, that is a dexterity that is underdeveloped,” acknowledges Westert. “If you can explain clearly what you have found, you are probably better able to debate with the buyers of your product.”

The expectation is that also established money lenders will take part in this initiative. Westert: “If there is a lot of activity on a certain research project from patients, it may be so that health insurers, industry or the government will take part as well because they want to be a part of the project.” Engelen: “Imagine that €50,000 is needed and they’ve already raised €35,000. A pharma company might think: patients that use my medication need another €15,000, and we’re willing to pay that for them, to help them with their everyday challenges.” I have spoken to various fundraisers, government and pharma companies and they see this as a very interesting idea.

MedCrowdFund also will have a module for events, like a concert for example. “You can announce the concert through the website, people can buy tickets there and handle all the rest of the stuff including sending tickets, mail lists etc. The money goes straight to the selected research project,” explains Engelen. The power of the concept is in the direct relationship between the donation and the goal and often even the person. The usual “donate to our cause” funding mechanism can be something like a black box: you put a coin in and you haven’t got a direct clue about what is going to be done with it. That is ok to finance things like fundamental research, but we think it is time for another field next to it. Our way is to make clear to everybody for whom you are doing the work and for what purpose you are doing it. Strong ties will help this kind of research thrive.”

Westert: “Another advantage is that if people invest in a project, they are also interested in the results. That involvement gives a lot of dynamics to a project.”

Does the patient actually become a kind of shareholder? Engelen: “Certainly. Even better, they come up with the plan, raise the money together, decide who is going to do the research and in the end they own the results. Patients are the big shareholders. And the data will be in an open data repository, not only the results but also the raw data, to be reused for the next project.”

A year from now? Engelen: “I have no idea, we’ll have to see. I take it that patients are more capable to collaborate in this than many might give them credit for. My hope is that people with good ideas about the improvement of healthcare can find a place here. And no matter how small the result of the research, a small change can make a big difference in the life of a person. Then everything is profit.”

In December the first pilots will start as a proof of concept, with ParkinsonNet among others. Launch is in January.

What do you think?  Do you know of other initiatives to develop, fund, and pitch patient directed research ideas, independent of the usual channels?