Home » Policy Issues » For whose benefit do boards certify? (Updated!)

For whose benefit do boards certify? (Updated!)

Update Nov. 26: great news! In today’s NY Times is Gynecologists May Treat Men, Board Says in Switch! Their reason for the change is still totally doctor-centric – even the mention of patients is about “the doctor-patient relationship,” not about the patients’ best interest. But at least they were willing to change their minds. Great! 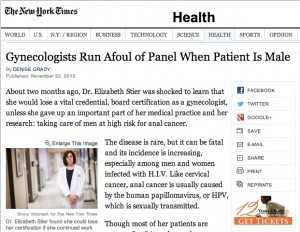 In the participatory medicine movement, patients learn to be careful, informed partners for their clinicians, and careful informed shoppers for medical services. One thing to look for is board certification. While there’s much controversy (see Bob Wachter’s blog) about the details of the process, board certification is intended to weed out docs who are seriously out of date. And that’s important to patients – more on this below.

But whose interests are top priority? The doctors’, or patients’ and families’?

There’s outrage over a new case in which a top doctor may lose her certification because she’s extending her skills beyond what her board allows. She’s a gynecologist treating men who have a problem where she’s an expert – a non-gyn problem – based on her experience treating women with the same problem.

Caution: for non-medical people, the biological facts may make you cringe. If that happens, don’t think in pictures. But do think about it as striking someone you care about.

First, a word about why certification matters.

I assert that certification in principle is important, because as the Institute of Medicine published long ago, on average it takes 17 years for half of physicians to adopt a new method. That surely causes harm to patients who go to a doctor trusting they’ll get the best medicine has to offer. But as that study showed, it’s not at all sure that every doctor knows the latest, or will check.

Imagine if your mother (or child) had a severe diagnosis and died. Then imagine, after the death, you learned she could have been saved by new knowledge that was published 15 years earlier. But this doctor happened not to know. This happens, even if the doctor is a wonderful person – it’s not like some docs are Schweitzer and some are schlocks. (A comment on that “long ago” post noted that this is part of a historical trend – the book The Fourth Paradigm notes that it took 264 years for the scurvy cure to become universal!)

Part of the remedy for this is for patients and families to engage in their care, learn what they can, and ask questions. As our e-patient white paper said in 2007:

… adopting the traditional passive patient role and putting oneself in the hands of a medical professional may be considerably more dangerous than attempting to learn about one’s medical condition on the Internet.

The other part of the partnership is for clinicians to learn what they can, ongoingly. And that’s part of why certification exists: you can’t pass certification if you’re out of date.

(And mind you, the 17 years is for half of doctors to get on board. Who knows how long the rest take. I read one doctor’s comment on the subject (I can’t find it now) where he said “I was licensed to practice 32 years ago. How dare you suggest I don’t know what I’m doing??”)

Should other purposes outweight patient need?

I’ve heard that the certifying boards often point to an additional value: certification is a way for a specialty to ensure its own integrity. For instance, what if a skilled and certified physician also indulges in shady side businesses?

And even trickier, what if it’s for a skill within the specialty, being applied to someone else?

I’m open to discussion, but here’s my concern:

If certification becomes seen as focusing on doctors’ needs, not patients, it will no longer be clearly relevant for patients. It will become ambiguous: “Maybe I need to also seek good docs outside the certification rules.” That would be tragic.

I’m not for a moment disputing the need for a profession to enforce its integrity. I’m simply saying, when patient needs and professional needs collide, which outweighs the other?

I think the answer goes back to Hippocrates – “first do no harm” – and I hope the leaders of this board will agree. They are faced with what must be an unprecedented leadership challenge. It will be true tragedy if more deaths result because a profession inadvertently put a higher priority on its own needs than those of patients – patients of all sorts.

I mean, isn’t is wonderful if a profession’s skills suddenly benefit more patients?