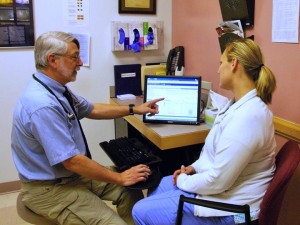 The other night I participated in a very useful Google+ hangout with SPM members Adrian Gropper and Michael Mascia, and Michael Chen [of NOSH, explained below]. The discussion focused on a subject I think is incredibly important: the patient-centered health record.

This topic is hard to discuss without drowning in technical terms and acronyms. I consider myself fairly tech-savvy and still struggle. So I’m going to describe the idea first without tech terms or acronyms, and then with some of the key jargon added, so more technical readers can see what we’re specifically proposing.

The 55 minute YouTube replay of the hangout is embedded at the end of this post. I think it is worth watching. Before watching it, consider reviewing the following basic information to help set the stage.

The current EHR model is that each office or institution owns and manages an electronic record that contains information about the patients in that system. Despite the obvious need and lots of talk, there has been little actual progress towards making these separate and mostly proprietary systems ‘interoperable’ and therefore able to share information. The result is that

This is a problem. Lots of problems, actually.

Our proposed model, without acronyms

The model discussed in this video takes a different approach, one that appeals to me for both philosophical and technical reasons. In this model:

That was English. Now a version of the same information with some jargon:

There are several important considerations in a system like this:

Our call to action:

Patients and clinicians can help us move from where we are now to a patient-centered health record system by:

What do you think?

Members of our Society for Participatory Medicine [join here] can participate in discussions on our member listserv. Like many forums, ours is sometimes noisy and scattered (ahem, wide-ranging?), but they’re also home to some great threads. The post above is a message posted Saturday by SPM board member-at-large Peter Elias, a recently-retired primary physician in Maine. It’s already been cross-posted by THCB, The Health Care Blog.