Why We Are Losing the Battle Against Infectious Disease 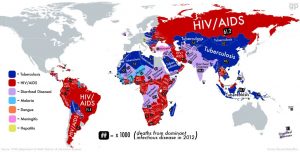 Antibiotics and similar drugs, called antimicrobial agents, have been used successfully for the last 70 years to treat patients who have infectious diseases. However, these drugs have been used so widely and for so long, that the infectious organisms the antibiotics are designed to kill, have adapted to them, making the drugs less effective.

Antimicrobial resistance (AMR) happens when bacteria, viruses, parasites, and fungi become resistant to medications that were previously able to cure them. Common and life-threatening infections like pneumonia, gonorrhea, post-operative infections, as well as HIV/AIDS, tuberculosis and malaria, recent infectious disease such as Zika and Ebola, thus become untreatable.

Left unchecked, AMR is predicted to have significant social, health, security, and economic repercussions that will seriously undermine the and well-being of people throughout the world. Currently, AMR accounts for an estimated 50,000 deaths in the US and Europe, The Center for Disease Control ( CDC) puts the number for the US alone at 23,000.

A project commissioned by the British government in 2014, entitled: Review on Antimicrobial Resistance,  concluded that 10 million deaths per year, more than cancer, and at least $100 trillion in sacrificed gross national product is what we can expect from AMR in the future.

Conclusions from this study propose the following solutions:

Require doctors to check patients with a rapid diagnostic device before writing prescriptions.
Compel drug companies to underwrite the development of new antibiotics, even if they don’t themselves make them.
Ask governments throughout the world to set explicit 10-year targets for reducing antibiotic use in agriculture.
Create a global watchdog body to ensure progress is made.

In September, 2016, the United Nations General Assembly convened a one-day high-level meeting in New York on AMR.  Member States, non-governmental organizations, the private sector and academic institutions participated. The primary objective was to summon and maintain strong national, regional and international political commitment to comprehensively address AMR; to increase awareness of this problem and to generate global consensus. The meeting succeeded in encouraging the nations of the world to work together to accomplish the strategic objectives of the World Health Organization Global Action Plan, WHA (World Health Assembly) 68.7, issued in 2015.

The Plan outlines the following goals:

To improve awareness and understanding of antimicrobial resistance;
To strengthen knowledge through surveillance and research; To reduce the incidence of infectio To optimize the use of antimicrobial agents; and
To develop the economic case for sustainable investment that takes account of the needs of all countries, and increases investment in new medicines, diagnostic tools, vaccines and other programs

This recent UN meeting was the fourth time in the history of the UN that a health topic was discussed at the General Assembly (HIV, noncommunicable diseases, and Ebola were the others). For the first time, Heads of State did commit to taking a broad, coordinated approach to address the root causes of AMR across multiple sectors, especially human health, animal health and agriculture. They reaffirmed their commitment to develop national action plans and pledged to strengthen regulation of antimicrobials, improve knowledge and awareness, and promote best practices, as well as to foster innovative approaches using alternatives to antimicrobials and new technologies for diagnosis and vaccines

Are these meetings and advisory groups a lot of talk, or a critical first step?  If these leaders follow through, engage now, and take some of the following actions we might just have a chance to combat this worldwide crisis.  I believe we urgently need the following:

1.  Large–scale research.
2. Underwriting of new medications and tools to fight against disease.
3. Education campaigns to help people understand what they should be doing and what they should not be doing.
4.  Initiatives  that look at the use of antibiotics in animal feed and development of alternatives that are safe and effective.

World leaders, however, cannot do this alone.   Healthcare consumers of every nation need to get behind this effort.  They need to question their physicians when they prescribe an antibiotic; speak out to quell the spread of infectious disease, and actively use available resources to curb the spread of living organisms that carry disease.

Furthermore, we need to educate all health consumers about risks of infection and its avoidance.  We can do this  using available digital communication technology such as SMS text messaging, web promotion of best practices and grass roots campaigns similar to what we have done to encourage people to get flu injections. It is only when the world awakens to the scope of this problem that we will begin to find the right antidote.