My Mother’s Scrap of Paper 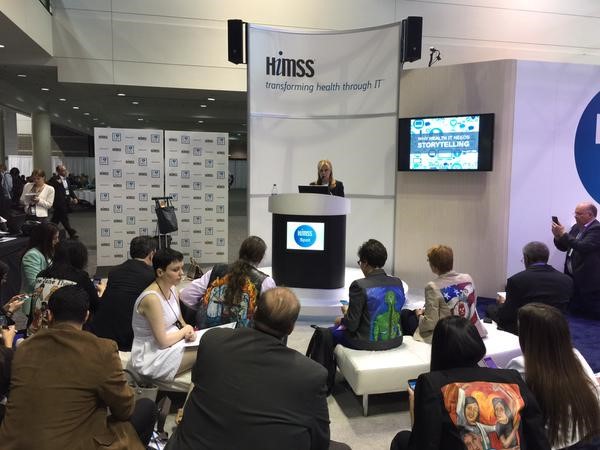 I’m known in social media for my role as @EMRAnswers. Most people don’t know the personal and family pain that makes me know how important this is. Here it is. (That’s me above, sharing my story at the Walking Gallery meetup at HIMSS in 2015 – more on this in a moment.)

I’ve worked in healthcare over 25 years:  In administration through hospital credentialing and procurement, as a practice administrator shuffling through paper charts, missing codes, and reimbursement in an era of managed care.  It was during this time that my mother became ill with CLL (Chronic Lymphocytic Leukemia), and COPD (Chronic Obstructive Pulmonary Disorder). My mother was a staunch believer in Health CARE. She grew up believing that physicians were healers – and that nursing facilities took care of the elderly. Her decision to reside in such a facility began our descent into a world of doubt, fear and errors.

I looked, as most caregivers do, at the inside of the building, the floors, the paint and the aesthetics. We are preoccupied, vulnerable and first impressions are everything. I judged the worthiness of the facility by its locale, the staff and our welcome.  I took for granted that “Nurses” were RN’s, that having an MD as Chief of Staff meant he was there every day, and that daily living meant more than struggling to survive. I didn’t know enough to check physician track records, medical malpractice and negligence. There was no Yelp review. This was before I became familiar with social media. It was all blue skies and daisies, until my mom became a resident. That started our fragile dance between LTC (long term care), ED, hospital, provider, back to LTC.

Thus began my advocacy. Not just for MY mom. I was vigilant about everyone’s mom – policing halls, greeting residents, bringing cookies, and answering cries for help.  I watched my mother change from a vibrant, confident superhero to a terrified, confused and helpless invalid. I took her to providers who placed her on medication, only to bring her back to a facility where medications were routinely discontinued because of cost.

I was “on call” 24/7. My mom became my mission. My 3-year-old knew where all the toys were kept in the ED, as we were frequent fliers. “AMA” meant an ambulance was never called. I loaded her, her wheelchair, her O2 tank, and my son into the car, and as I was running out, I grabbed a piece of notebook paper with her medications scribbled on it. This was her medical record. And I was the keeper of the information.

My mother passed away after three years of suffering, much of which was preventable. Not only was there a lack of communication, a culture of caring had been replaced by one of cost. Human lives took a back seat to ROI. Instead of treating aging elders with the respect and dignity they deserved after years of giving, nursing homes were nothing more than “death beds” waiting to empty. I was so engrossed in the day to day challenges, that I didn’t have time to stop and think about the larger picture of what was wrong.

Fifteen years later I am sorry to say that things have not changed much. My daughter recently had thyroid cancer. She was eager to use the patient portal to coordinate her labs, multiple tests, from all providers.  It was not that easy.  Informational gaps were everywhere – care coordination was still back in the year 2000.

We need patient access. But it’s more than that. We need access to actionable information. It’s been several years since the enactment of the ACA and little has been done to promote shared decision making. Instead, the measure for acceptable patient access (VDT – to “View, Download, Transmit” our records) was dropped from 5% of patients all the way down to “at least one patient”(!), which halts progress.

We can do better. My daughter is working hard to be a partner in her care, yet she has a toddler, and she’s tired as well as sick, and sometimes it’s easier to give up rather than continue asking.

And then providers say, too often: “We tried giving them a portal, and people don’t use it.” This is a sure sign that the work wasn’t done with the full engagement of the people who have the problem – the patients.

Please help us win this. Stand up and ask – demand electronic access to your FULL patient record, including download and transmit to other providers.

We should not have to carry around a tattered scrap of legal paper with medical information on it. Join members of The Walking Gallery of Healthcare, and join the Society for Participatory Medicine. Join us as we share our stories and pleas that PATIENT LIVES MATTER.

My name is Linda Stotsky, and I share my story as a patient, a Health IT advocate, a mom, and a daughter. I can be reached at inda.Stotsky@gmail.com or on Twitter via @EMRAnswers.