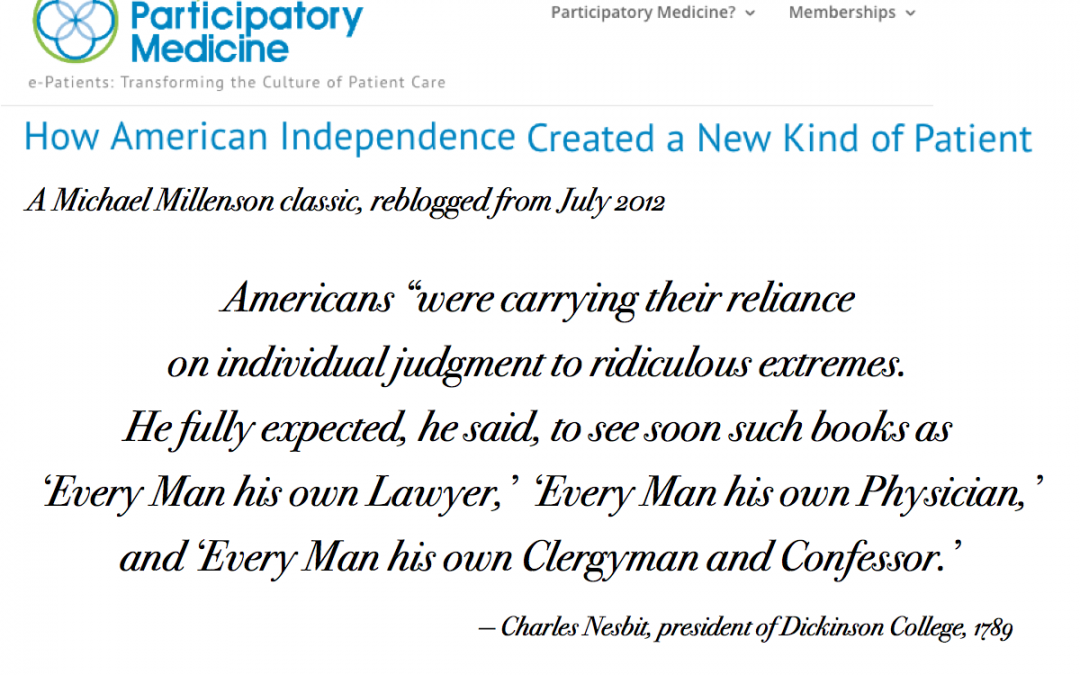 Originally published six years ago – as good as new today!

The empowered patient, skeptical of professional authority, is not a new phenomenon: s/he was actually created by the American Revolution.

Reading through historian Gordon Wood’s Pulitzer Prize-winning book The Radicalism of the American Revolution, I came across a passage describing how national independence from the British led to an independent turn of mind in other spheres. Wood writes that Charles Nisbet, president of Pennsylvania’s Dickinson College, complained as early as 1789 that Americans

In fact, New York’s Medical Repository wrote in 1817 of a shortage of “professional pharmacists” at a time when they did drug-mixing and diagnostic duties. But while the Repository acknowledged the lack of professionalism might lead to some mistakes, it continued that “these mistakes would be no more than occurred in Paris, London or Edinburgh, ‘where pharmacy, as a profession, is scientific, exclusive and privileged,’” writes Wood. (Emphasis in original) What a remarkable attitude!

Around this same time, the word “statisticks” appeared for the first time in American dictionaries. However, in America, there was a growing opinion that facts could speak for themselves without expert interpretation. As one popular journal put it in 1811, “The reflections arising out of [the facts] should be left to the reader.”

Concludes Wood: “The result of all these assaults on elite opinion and celebrations of common ordinary judgment was a dispersion of authority….Knowledge and truth, it was argued, now indeed had to become more fluid and changeable, more timely and current.”

Web printouts at the doctor’s office, anyone?

Of course, this was also a society where moral judgments still routinely trumped medical ones. (Come to think of it, maybe that era isn’t totally over.) Charles Rosenberg’s acclaimed The Care of Strangers: The Rise of America’s Hospital System relates how hospitals in the late 18th and early 19th century were mostly places for the poor or desperate, with laymen on the hospital board limiting admission to the “morally deserving” in the former category. (A pregnant woman might be admitted if married, for example, but rejected if not.)

Still, patients did retain some rights. For instance, the Massachusetts General Hospital warned in 1824 that medical students must “carefully abstain from any gesture or remark which may tend to alarm the sick.”

Sometimes the independence shown by the sick could be alarming in its own right.  As Rosenberg relates: “The persistence of punishment cells and cold showers illustrates an endemic truculence among at last some antebellum hospital patients, as do repeated thefts of food and the smuggling in of alcohol.” So many patients simply left the hospital without telling the staff that the category of “eloped” was adopted along with “died” and “recovered.”

As I’ve written previously, the American Medical Association’s original Code of Medical Ethics in 1847 advised doctors that “the obedience of a patient to the prescriptions of his physician should be prompt and implicit. [The patient] should never permit his own crude opinions as to their fitness to influence his attention to them.”

Looking at the historical record, this seems just wishful thinking. “Participatory medicine” with an independent-minded patient was always, and will always be, part of the American character.

Michael L. Millenson is president of Health Quality Advisors LLC in Highland Park, IL and a former board member of the Society for Participatory Medicine.