What Healthcare Can Learn from Mr. Rogers 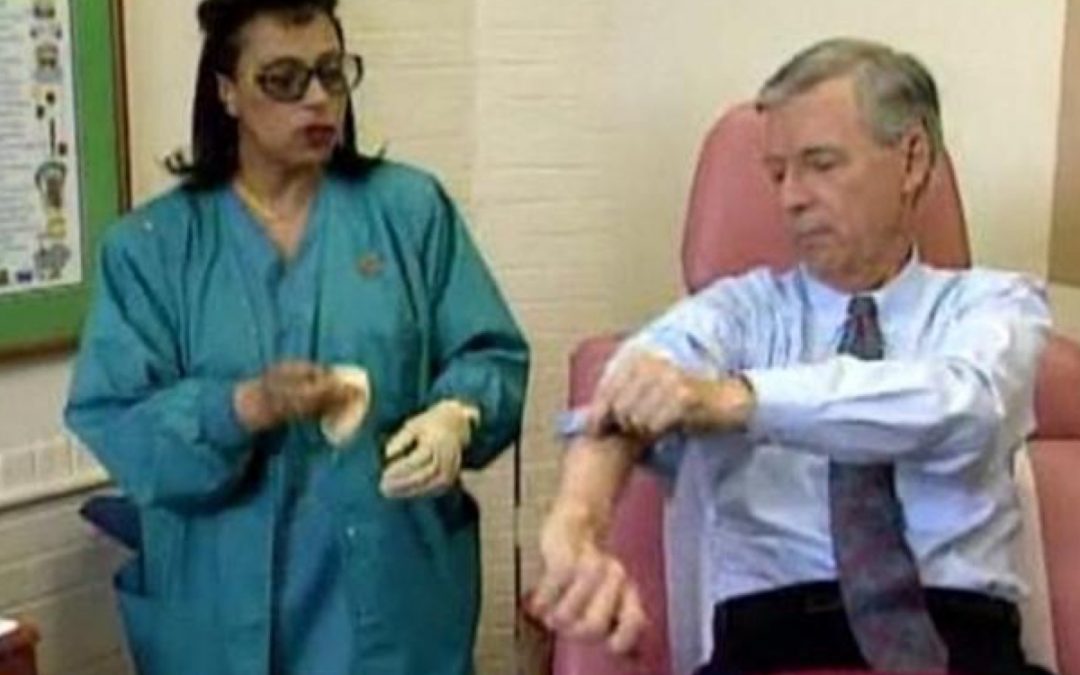 Editor’s note: This is a guest post by SPM member Nancy Michaels.  Members of our society are welcome to submit guest posts – see the guidelines.

I remember when Mr. Rogers’ Neighborhood first aired on the Public Broadcasting System. In my mind, he was the kindest, most compassionate and understanding man I had ever seen – in life or on television.

Although I remember enjoying his program and looked forward to watching it nearly every day – I was too young to fully understand and appreciate the real gifts that Mr. Rogers possessed in helping children to manage life’s challenges, feelings and emotions. When I had my children, I watched the program with them and was always amazed at the way he clearly and compassionately dealt with tough subjects like divorce, death and discrimination.

Won’t You Be My Neighbor, a documentary directed by Morgan Neville, celebrating the 50th anniversary of the launch of Mr. Rogers’ Neighborhood, is in theaters now and I’ve seen it twice – going again this weekend, I loved it so much! I first saw it with my son Noah and then I returned to take a closer look because I felt so many analogies with how Mr. Rogers communicated with children and how it related to my experiences as a patient and my communication with my medical team.

Fred Rogers had so many great philosophies that were demonstrated in his program and were highlighted in the film that have relevance in the medical world. I’d like to share three insights I gleaned from Mr. Rogers and watching Won’t You Be My Neighbor that clearly connect to medicine and the relationship between a medical team and patient or care giver.

“There is no normal life that is free of pain. It’s the very wrestling with our problems that can be the impetus for our growth.”

Mr. Rogers took on the tough issues of day in the context of what a child could understand. He never approached a tough subject with a child in a way that was too direct or tough. Instead, he met his audience where they were and framed things in a way that addressed the problem using language they could understand. He never forgot how vulnerable it was to be a child.

It’s part of a physician’s duty to approach their patients and caregivers with information that they know might be upsetting and attempt to deliver this news exceptionally well. I personally have experienced this positive and caring level of communication between my medical team and have been grateful. I also believe in the old adage “what doesn’t kill you makes you stronger,” but it’s nice to be met with compassion when word of your illness is delivered.

Unfortunately, in some instances, I have not had such a positive experience when receiving potentially upsetting news. I wonder how patients and family members would feel if their medical team might ask themselves before sharing a diagnosis or procedure “how would Fred Rogers phrase this?” I know he’d deliver the news with an empathic tone and would express real caring in his facial expressions and body language – which often communicates more than actual words do.

We so appreciate that kind of effort.

He Always Maintained Mutual Respect with his Viewers and Guests

Fred Rogers’ approach was to use deferential speech when talking with children. He was kind to his core and was loyal and committed to his desire and belief that everyone – including the most powerless (children) deserves an equal say.

Although not all patients are “powerless” (some maybe if they are incapacitated), patients can often feel that way. We are often hit with devastating news that is difficult to process at best and can be equally debilitating. Oftentimes the mere word of our diagnosis hits us like a ton of bricks and we stop listening to what’s being said.

Physicians and nurses might borrow his approach in speaking to their patients with language they can understand and with reverence for their patient’s reaction to potentially disastrous news. Taking your time and allowing for patients and care givers to take in that information is so helpful.

Mr. Rogers respected children and treated them with dignity and grace. Children appreciated and loved him because of the way he spoke and listened to them. It was mutual admiration society on Mr. Rogers’ Neighborhood. This would work in healthcare as well.

Caring Enough to Help Someone Who May Come After You

“One of the greatest dignities of humankind is that each successive generation is invested in the welfare of each new generation.”

Mr. Rogers wanted everyone he encountered to know that they were unique and important and that it was the substance of a person that was so essential. He believed everyone has inherent value, much like what is practiced in participatory medicine when medical professionals, patients and caregivers can work together to deliver and seek out the best possible care and pass that on to the next person who may be facing an illness and hopeful recovery. We can all learn from one another in life and in medicine.

If you see the documentary, his appearance at the hearing at the U.S. Senate Committee on Communications (7 minute YouTube)  to request funds to help support the growth of national public television – a relatively new concept then that was in jeopardy due to the wishes of President Nixon. Mr. Rogers was mesmerizing as you witness his unwavering commitment to the next generation and teaching them better ways of coping with their emotions. His testimony won over Sen. John O. Pastore, the chairman of the subcommittee on the basis of his testimony, and led Pastore to say, “Looks like you just earned the $20 million.”

As Mr. Rogers said, “There is something of yourself that you leave at every meeting with another person.”

Showing you care builds trust, loyalty and endless referrals to medical practices when sincere and thoughtful communication occurs with patients and that can’t help but increase revenues.

Take the Time to Listen

“People have said ‘Don’t cry’ to other people for years and years, and all it has ever meant is, “I’m too uncomfortable when you show your feelings. Don’t cry.”  I’d rather have them say, “Go ahead and cry. I’m here to be with you.’”

It was beautifully illustrated in Won’t You Be My Neighbor, when a member of his production crew explained that Mr. Rogers had a gift of pulling more information from a child by asking him or her a question and waiting for their response. When they answered, Mr. Rogers would smile and simply wait for more – which was inevitable and the child would continue to speak.  This producer said that if you really want to communicate – you need to listen and embrace the “space” of silence – and Fred Rogers did that.

The documentary ends with a question asked of everyone who was featured in the film and was posed by Neville. He asked, “can you think of someone who’s helped you along the way? Who is that person?” Everyone had an emotional comment about a parent, teacher, mentor or friend who had a significant impact on their life. It allowed the viewer to contemplate that very question as well. When the lights went on, there wasn’t a dry eye in the house and a standing ovation was given.

Clearly, even adults, can appreciate the gentle approach Mr. Rogers had in talking with his viewers as evident of their response to the movie and seeing him in action with children, to the U.S. Senate.

I thought of many people in my life who had helped me and I also thought of my amazing medical team who helped to save my life and to whom I’m forever grateful.