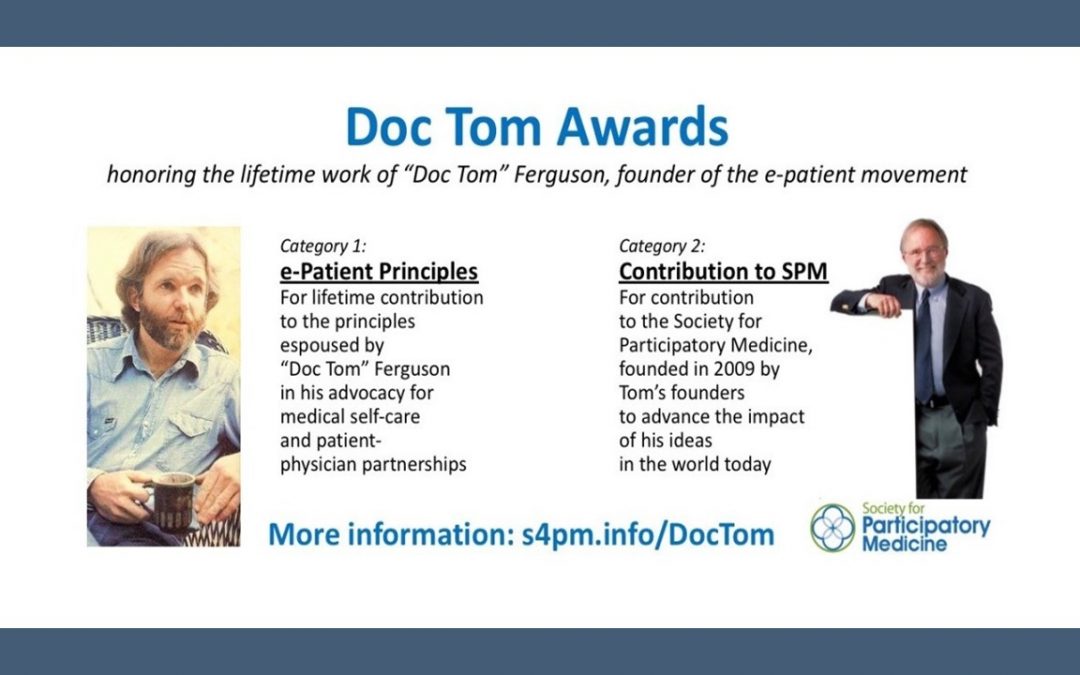 Our Society’s 2nd Annual “Doc Tom” Awards are now open for nominations! Spread the word, and join us at our annual conference on October 15 for the announcement of our award recipients!

Doc Tom Ferguson was the founder of the e-patient movement. To promote his values, SPM wanted to highlight the work that others do that promotes and commemorates Doc Tom’s overall values and beliefs. In previous years, the following has been included within conference promotions to share and bring light to Doc Tom and the awards:

Our Society was created in 2009 to honor and continue the work of “Doc Tom” Ferguson (1943-2006), a true visionary who foresaw decades ago that “e-patients” (empowered, engaged, equipped, enabled) would transform the future of health and care.

Last year, 2018, marked the fortieth anniversary of Tom’s graduation from medical school and his first published thoughts on medical self-care. In honor of this, SPM created the “Doc Tom” Award to recognize people and/or organizations whose work exemplifies what Tom foresaw and advocated.

With 2019 commemorating our society’s 10th anniversary, what better than to carry on the tradition of Doc Tom by having our 2nd annual “Doc Tom” award?!

To learn more about Tom’s work, publications, and legacy, visit the /DocTom page on our website: s4pm.info/DocTom

With the same vision as last year for the awards, there will be two awards: one to signify Tom’s work during his life, and one for what we’ve done with such work since his passing in 2006. Please view the award criteria as follows:

For a person who exemplifies what Tom stood for during his lifetime – specifically, who:

For a person who has significantly furthered the visibility and impact of our Society – someone who:

Anyone can nominate, and anyone be nominated. Here’s how.

This is an open nomination process. Award recipients will be decided by a panel of SPM members and announced at our conference, October 15, in Boston. Join us there!