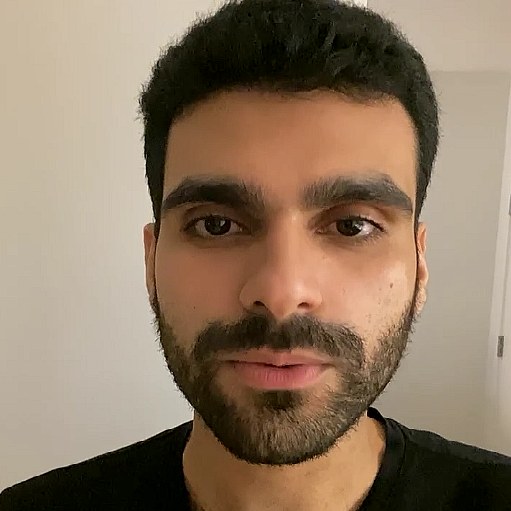 In 2013 the Institute of Medicine published a landmark 436 page consensus report, Best Care at Lower Cost: The Path to Continuously Learning Health Care in America. Its summary contains the characteristics of a continuously learning system: 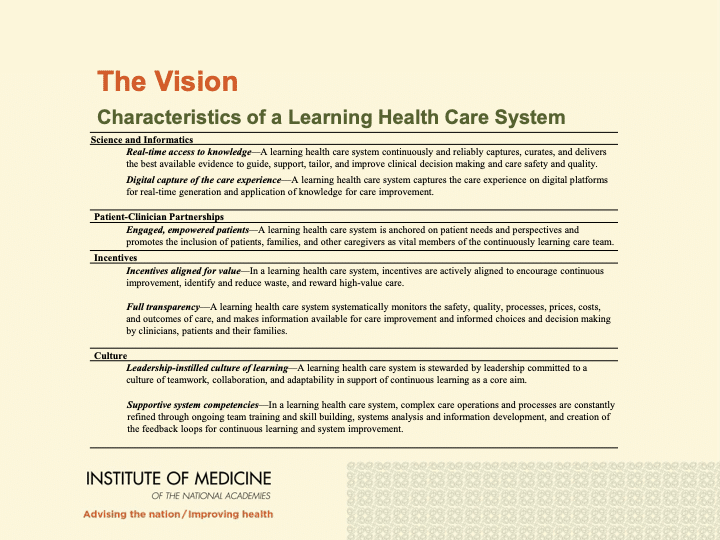 Engaged, empowered patients—A learning health care system is anchored on patient needs and perspectives and promotes the inclusion of patients, families, and other caregivers as vital members of the continuously learning care team.

It’s no coincidence that in this table, these partnerships are right next to informatics: how can we be partners if we can’t both see the information?

Think about this: according to the Institute of Medicine (IOM)–now the National Academy of Medicine–one of the main characteristics of a learning healthcare system is that it is anchored on patient needs and perspectives. One that encourages patients, their families, and caregivers to have input into the system. This empowers patients and caregivers to become more engaged and act as vital members in the healthcare system, which starts with promoting and strengthening patient-clinician partnerships.

But despite this IOM declaration eight years ago, today’s medical record systems exhibit nearly nothing to promote this partnership. Why not?

We believe that the Participatory Medicine Manifesto, which we launched in 2021, provides a reasoned framework for understanding this shortfall and a path forward. The Manifesto facilitates this partnership between providers, patients and caregivers through five key commitments it describes, in an unprecedented way that had not been defined back then. 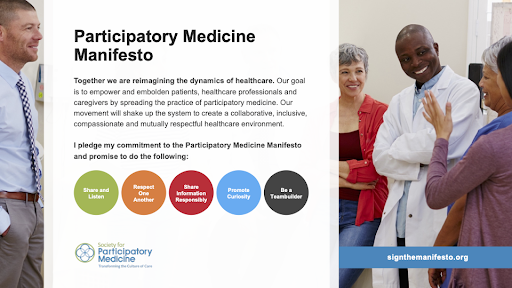 The Manifesto consists of five patient and clinician commitments: (a) Share and Listen, (b) Respect One Another, (c) Share Information Responsibly, (d) Promote Curiosity and (e) Be a Teambuilder. Together, all these commitments aim to increase the participation between patients and caregivers in medicine while collaborating with their providers – exactly as the IOM proposed.

The five elements of the Manifesto can be applied in many aspects of healthcare, particularly care delivery. The Society for Participatory Medicine, through its Manifesto, aims to shake up the healthcare system and promote greater cooperation among patients, caregivers, and healthcare professionals.

But we cannot shake up the system without shaking up the health technologies that are used in healthcare. Health Information Technologies (HIT) are increasingly used in healthcare, but to what extent are they supporting participatory relationships between patients and clinicians? We believe that HIT should be evaluated through the lens of the commitments of the Manifesto to assess how much the technologies are advancing the practice of participatory medicine. This is vital because the potential impact of Participatory Medicine has often been overlooked in technology, and the resulting shortfall is predictable.

The technologies used in healthcare today can be very specific and have in-depth impact on the participatory medicine movement, yet their potential is often overlooked in the medical community. For instance, a study by Robinson et al. (2020) and Sieck et al. (2018) found that when patients received messages via patient portals or secure messaging services, many of them responded with further questions and issues to discuss regarding their health, clearly indicating increased engagement. This gave patients the opportunity to become curious and ask more about their health, which meets the requirements of the fourth element of the Manifesto, Promote Curiosity.

While that is an intrinsic quality of secure messaging, how this technology is implemented and adopted also can support or inhibit the practice of participatory healthcare. For example, Shimada et al. (2017) reported that only 5.5% of overall messages were found to be initiated by providers, leaving the rest to be initiated by patients and caregivers. Therefore the technology can be helpful but the utilization fails.

Now, let’s imagine that more providers were aware of the power of initiating messages to patients. What if at least 30% of messages were initiated by providers instead of 5% as the aforementioned study discovered: would patients become more curious, empowered, and involved? Studies are lacking, but we are certain that there are numerous examples and practices where health technologies help achieve Manifesto goals, but are still underutilized.

Partnerships Are Built on Promises

Eight years ago the IOM’s blue-ribbon panel called for “inclusion of patients, families, and other caregivers as vital members of the continuously learning care team.” In the absence of a rigorous framework for doing this, adoption has been weak.

Using the elements of the Manifesto as a lens when using, researching and evaluating health technologies and how they are utilized can open doors for many possibilities in improving patient engagement. Future work using such a perspective can advance the Participatory Medicine movement. In addition, an evaluation model to validate the use of the Manifesto in this context is needed to increase the validity of this approach. Your feedback, insight and collaboration would be highly appreciated in this effort to establish a model that can reflect the Participatory Medicine’s status and impact in HIT.

Mohammed Mallouh is a Northeastern University alumnus.  He has an M.Sc. in Health Informatics (2021) and can be reached at mohammed.s.mallouh@gmail.com