Linnea Olson: An Appreciation of a Giant 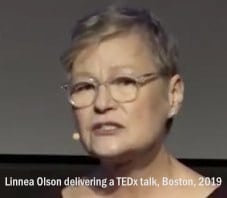 Pioneers of medical progress are lauded in published articles and by their professional peers. But it is often the patient advocates, particularly those who demanded better treatment, spearheaded clinical trial advances, and bravely took on institutions and standards of care, who are the underappreciated giants on whose shoulders such research pioneers stand.

I’ll pause here and suggest that if you aren’t familiar with Linnea, check out her perfectly named blog, “life and breath: outliving lung cancer for the terminally optimistic”, and her November 2019 Boston TEDx talk, “Patient, parent, person, research subject”.

Standing on stage at WGBH Studios in Boston to deliver that TEDx talk, Linnea said plainly, “From the moment I was diagnosed, I set my sights on being an outlier.”

And what an outlier she became. Linnea participated in six clinical trials, which served as landmark studies that changed the course of lung cancer targeted therapy the world over. Scans of her lungs are on display at the Paul S. Russell Museum of Medical History and Innovation at Mass General Hospital. By surviving, by propelling research, by collaborating with leading researchers, and by lighting the way for more clinical trials, she became a preeminent figure in lung cancer research.

The Internet’s global growth sparked the rise of online support communities where patients, caregivers, clinicians, researchers gathered to share information and give support. Linnea launched her blog more than 15 years ago. That in itself makes her a pioneer among healthcare blogs. “life and breath” stood out immediately because of its intensity, rawness, and, drawing on the title of her blog, its optimism–despite her terminal diagnosis. For someone so sick, she exuded life.

Back in 2019, an hour after she delivered her TEDx talk in Boston, Linnea gathered with friends at a nearby restaurant for a pre-birthday celebration. Standing over her birthday cake adorned with candles, she joked that she never thought she’d see so many birthdays. A fellow lung cancer patient advocate hugged Linnea’s shoulders, remarking that so many cancer patients view Linnea as an inspiration, a beacon of light.

“I know, I know, and it’s hard,” she replied, smiling, but with a tightness in her voice.

Two Fridays ago, Linnea’s three children, August, Jemesii, and Peter, gathered with relatives and friends in Haverhill, MA, for a memorial celebration for Linnea. Clinicians from Mass General Hospital mingled with cancer patient advocates, and with her close-knit community of fellow artists. Linnea’s paintings and assemblages ringed the room. Jessica J. Lin, MD, one of the MGH care team, told the crowd, “Linnea pushed us to do better, to take a step back and really ask the hard questions, the ‘whys.’ Why certain things were done in a specific way, whether it was in clinical trials or in medicine in general. And,” Lin continued, “if the ‘why’ was not so clear, to shed more light, and sometimes even change course.”

Alice Shaw, MD, who was part of Linnea’s care team for more than a decade, referred to Linnea as a hero, and trailblazer. “She transformed the way we think about clinical investigation and innovation, and redefined, I would say, entirely, our expectations for Phase 1 trials,,” Shaw said. “She became the new face of clinical trials, and the promise of what precision medicine can bring to patients.”

What a legacy. Join me in raising a glass to my friend Linnea (she liked good gin), and to the other giants like her.

John Novack is a healthcare communications consultant who volunteers for the Society for Participatory Medicine and a number of other health-focused organizations, including Health Story Collaborative, AnCan, Journal of Health Design, and Collaboration for Outcomes using Social Media in Oncology (COSMO).

Did you like this tribute?  Consider joining the Society for Participatory Medicine.  We welcome you!  https://participatorymedicine.org/memberships/