Last weekend I stumbled across the “attic” of Tom Ferguson MD, who was the “George Washington of patient empowerment,” as CNN put it this month, citing his work since 1975 to create a world of freedom and power for patients.

(Patients? That’s you. Thank him.)

Those familiar with this blog know about the white paper DocTom’s team completed after his death in 2006. But I didn’t know some of his earlier writings are around on www.DocTom.com, a modest web site including a few old slide shows. They’re sans speaker notes, but the good stuff is the images: you can get the drift. 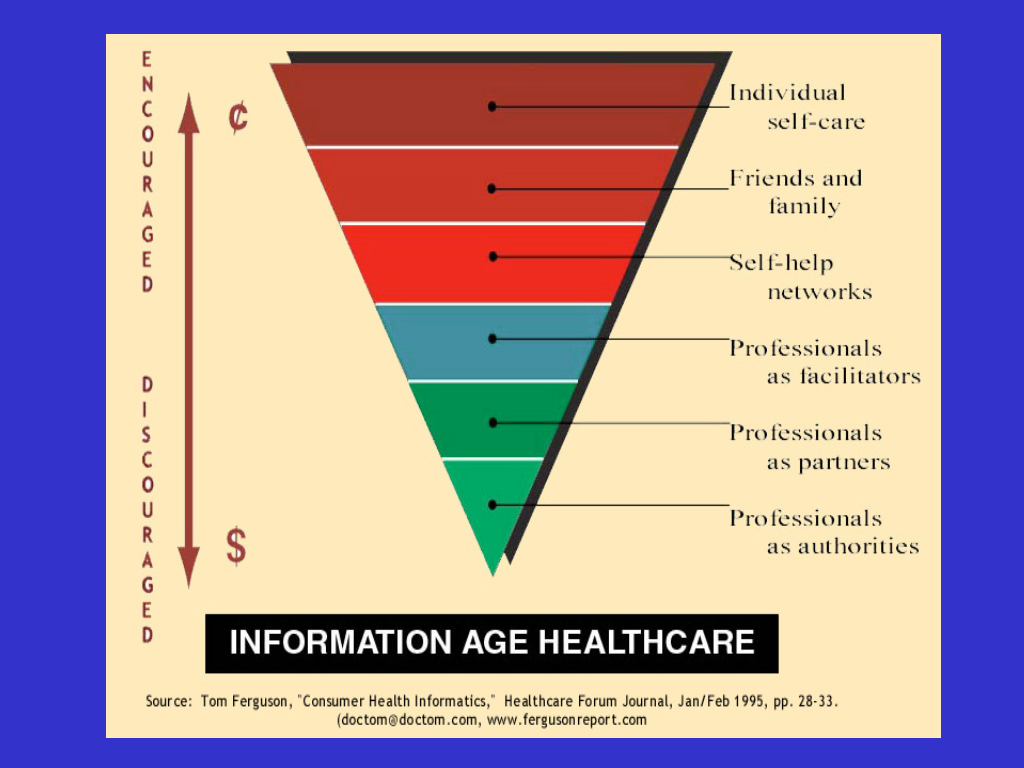 In the industrial age, the means of production and ability to create value were centralized in massive facilities. If you didn’t own the factory, you didn’t have freedom and power.

Those slides were made in 1995, when the Web had just been born, but they hit the nail on the head: today we have access to tremendous resources, and that empowers and enables us.

Please don’t interpret these slides as meaning that in the world of the future there will be no doctors. That’s idiotic. Rather, Tom’s vision is that “we the people” have a lot more ability to contribute than was once thought. And both costs and quality can improve as a result.

Compelling evidence to support this was collected into the white paper (above). Further independent evidence from around the world is provided by PCPCC (the Patient Centered Primary Care Collaborative), about which I wrote on my blog in May, including a few of their slides.

Steal these slides. Show them to others, put them in your decks when you give talks. And look at those PCPCC slides, with their data on cost and quality. It’s a new world out there – feed your head!