For most people, their impetus to be actively engaged in healthcare comes from an experience with serious illness—either their own or a loved one’s. My journey into participatory medicine began during my internal medicine residency at Boston City Hospital, a public urban hospital, in the late 1980s.  While there, I had a number of realizations that led to my passion for participatory medicine.

The first was that educating patients and communicating with them effectively pays big dividends in improved health behaviors and outcomes.  It is the most cost effective intervention we can offer.  Moreover, this only happens in an environment of  mutual respect.  In almost every patient, there is something to be treasured and respected.  Hopefully, they feel the same about us.

Next I realized that so much of what we do in healthcare is information management.  An extraordinary effort is invested into locating, organizing, recording, and regurgitating information that is used in patient care.  More on this later.

Finally, patients only see us (the healthcare system) for a small fraction of their lives.  The rest of their time they are home (or in the case of many of my patients in those days, in shelters and on the streets).  Therefore, no matter what we do in the office or in the hospital, it all falls apart if healthy behaviors don’t persist.

Because of my interest in information technology, I felt that I should cultivate that interest to hopefully improve the way we manage patients.  I pursued a fellowship in clinical computing, often called medical informatics.  I was fortunate to do this at Beth Israel Hospital (now Beth Israel Deaconess Medical Center) and Harvard Medical School in Boston.

Beth Israel was one of the first hospitals (since the 1970s) to use e-mail extensively for internal communication (I was there prior to the widespread use of e-mail).  As part of my work developing and implementing clinical systems, I wanted to improve the process of coordinating care for patients to prepare them for discharge from the hospital. E-mail seemed to be an important communication tool in the hospital, and I suspected that it was mainly used for communication about patients.  My mentor doubted that, suspecting that it was mainly used for administrative and social messaging. I subsequently did a study that revealed that a plurality of hospital e-mail use did in fact concern patients.

As part of my role at Beth Israel, I saw patients in a primary care practice.  At about the time I started building my practice in the early 1990s, Beth Israel had entered into a joint venture with a health plan, so it could provide low-cost health insurance to its employees.  The plan was obviously very popular, but it required that its members see physicians that were part of the hospital network.  Since I was accepting new patients, many employees became my patients.

Because they were employees who were accustomed to using e-mail, it was very natural to communicate with these patients using e-mail.  By the time we connected the hospital e-mail system to the internet outside the hospital, I was already becoming comfortable with its use in clinical care.  Moreover, I found that when used appropriately it reduced communication barriers with patients and augmented our relationships. 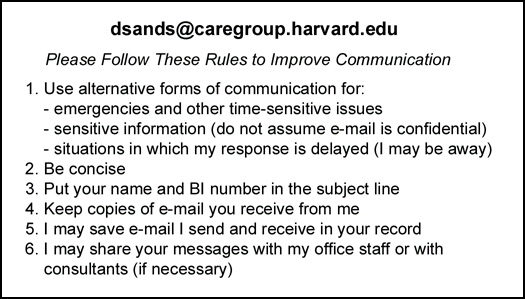 Over time, I developed best practices for its use, and in 1998 I co-authored the first national guidelines for the use of e-mail in clinical care for the American Medical Informatics Association, and later augmented these with community input for the Massachusetts Health Data Consortium.

One of my teachers at Beth Israel was Warner Slack.  In the 1960s, Warner was developing program that were among the first interactive computer-based interviews for patients, which asked patients questions and later attempted to diagnose simple medical problems.  He later wrote that patients were the most valuable but underutilized sources of information in healthcare.  This profound bit of wisdom, still being quoted 40 years later, stuck with me.  Warner encouraged me to pursue my patient-centered work.

Warner introduced me to Tom Ferguson, the pioneer of consumer health informatics, and we became fast friends.  I was eventually drawn into a close-knit circle of Tom’s apostles that became known as the e-Patient Scholars Working Group.  In 2009—three years after Tom’s death— we went on to organize the Society for Participatory Medicine to realize Tom’s vision.

At Beth Israel I also worked with Charlie Safran, David Rind, and others to develop the OMR, an online medical record for use by providers.  We put computer terminals (later computers) in all examination rooms.  I found that using the OMR during patient encounters was most effective when I could turn the monitor to share their records with them.  This had the immediate effect of demystifying the record and the patient’s own health information.  Together, my patients and I were able to review the impact of lifestyle changes—both good and bad— and medical interventions on their physiologic parameters.  This information was empowering to my patients.

After we linked these exam room computers to the Web, I developed our first clinical portal to organize the wealth of web-based resources for physicians.  From its very first iteration it included a section containing patient educational resources for two reasons.

After reading survey results from CyberDialog (now Manhattan Research) and Harris Interactive, and later Pew Internet and American Life Project, I realized that many patients were probably getting health information from the web, but many never mentioned it to me.  A few years earlier, in 1993, David Eisenberg, one of my colleagues in General Medicine at Beth Israel Deaconess, had published a landmark study in the New England Journal of Medicine that found that 1/3 of patients used complementary or alternative health methods but almost 3/4 of these never discussed it with their physicians.  He suggested that this become a part of all of our discussions with patients.

I extrapolated to the use of health resources on the Web and began a practice of asking every patient I meet whether they used the internet, if they had ever used it to obtain health information, and which websites they found useful.  This conversation helped my patients understand that, unlike some of their physicians, I welcomed discussions about information they might find on the Web and in fact encouraged them to search.  Through this, I also learned about new websites from my patients and, after reviewing them, I added them to the patient resources section of our portal.

I learned from one of my early mentors that most physicians, especially those in training, had difficulty admitting when they didn’t know an answer. Although this is true when communicating with other health care providers it is especially seen in discussions with patients. Many physicians feel that they have to maintain an aura of medical omniscience, something ingrained since medical school.

This information asymmetry, where the physician knows everything and the patient knows nothing is comfortable to many, but it felt burdensome and dishonest to me.  I felt liberated when I started admitting to patients when I didn’t know something and, rather than leaving the exam room to look things up, I found we could research things together online.

This was a much more satisfying approach to both me and my patients.  Even more, by recognizing that patients have access to health information and could be intellectual partners in their care—which they should, since they are not only experts on themselves but have the most at stake—I found that time in the office could be much more productive.  We thus moved from a relationship based on information asymmetry and paternalism to one of information symmetry and patient autonomy and engagement, which benefits both me and my patients.

In subsequent years I worked with John Halamka, David Rind, and others to develop PatientSite, which went live in 2000. PatientSite is a secure web portal that encourages secure e-messaging between patients, physicians, and other members of the care team.  The site also provided patients with information so they could better manage their health, permitted patients to request appointments and perform other administrative functions. Most importantly, PatientSite allows patients to see most of their records online, and every month 16% of our patients do just that, providing them the ultimate in personalized health information.

This type of access to one’s health information and healthcare team is ultimately empowering to my patients.  One of my patients, a retired minister disabled by diabetes and advanced neuromuscular disease wrote me that:

“I have a lot of medical issues. This … system has left me feeling comfortable and in good hands! Otherwise, I would feel as cold, depleted, and alone, as the lifeless tree in my front yard in the deepest of winter!”

My patients are no longer dependent on me to share what I wish to share at my convenience but creates a more level information playing field.  Their healthcare team is still available to answer questions about what they are seeing and it doesn’t mean that we don’t communicate information an interpretation to patients, but it seems to me only just.

I am taking a piece of your body to run a test, so you have a right to know what happens to that specimen as soon as possible—and in most cases it’s just as soon as the result is available to me.

If we can track packages and anticipate the time of their arrival online through FedEx and UPS, why can’t we track and receive our test results the same way?

So my path to being a Participatory Medicine advocate does not come from experience with serious illness but is born from lessons learned as a physician and as a health care information professional.  It also derives from long discussions with colleagues, all of whom are now involved in the Society.  But it just makes sense on so many levels, and now more than ever.

Our inefficient and overstretched healthcare system is struggling with an aging population and  an increasing burden of chronic illness, while families are coping with helping to manage the healthcare of their aging parents.  It is apparent that the only way out of this hole is to engage people as partners in their wellness and healthcare.  This requires a cultural change, among both individuals and healthcare providers. This can only occur through early and continuous education of citizens and physicians. Connected technologies, which provide unprecedented opportunities to lower the barriers to patient engagement can be an important tool in this cultural transformation.

One lesson that I share with physicians is that Participatory Medicine is not just something that we do for patients. It’s something we do with patients and that benefits both patients and physicians. I passionately believe that the status quo in healthcare is unacceptable.  Participatory Medicine is necessary to the future of healthcare delivery.