Home » e-Patient resources » Our Bodies Ourselves: support this pioneer of empowered, participatory healthcare

Our Bodies Ourselves: support this pioneer of empowered, participatory healthcare 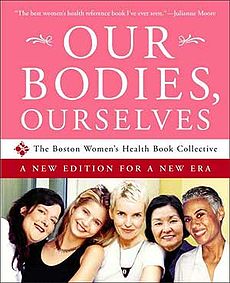 Some people think e-patient ideas are new. They’re not. I’d like to give credit to a noble antecedent, and ask for your support.

Shortly after I discovered this blog (February ’08) I recognized two strong precedents from earlier in my life: Dr. Benjamin Spock’s Baby Book (opening words: “Trust yourself. You know more than you think you do,”) and Our Bodies, Ourselves.

Dr. Spock was published a few years before me. Our Bodies,  Ourselves came along a year after I graduated college.

About its origins, Wikipedia says:

The health seminar that inspired the booklet was organized in 1969 by Nancy Miriam Hawley at Boston’s Emmanuel College. “We weren’t encouraged to ask questions, but to depend on the so-called experts,” Hawley told Women’s eNews. “Not having a say in our own health care frustrated and angered us. …”

These pioneers were empowered, irrepressible, and willing to do what they had to, to be engaged in their own care.

I was just out of college in Boston (where it was published). It was a heady year: the Vietnam war was still going on, the establishment was being overturned in every way possible, Vice President Spiro Agnew resigned in disgrace, the Watergate scandal started (leading to Nixon’s resignation in ’74). And now what – women want to look at their genitals?? Unheard-of: in those days, that stuff down there was known as “You know, down there.”)

Well, no more. One thing OBOS taught women was how to examine themselves with a speculum. (Twitter friend @MeredithGould recalls “fond memories of fighting to own [one].”)

Women looking at their anatomy?? Without a doctor present! Good heavens, could they handle the knowledge??

That echos the concerns of some people today who worry that patients can’t handle medical details. Our Declaration of Participatory Medicine begs to differ:

Thomas Jefferson had a radical notion: When the people are well-informed, they can be trusted to govern themselves. This powerful idea worked to end our rule by the King, but at the time it didn’t apply to slaves and it didn’t apply to women. It STILL doesn’t apply to patients. And it should.

Empowerment won: when Our Bodies, Ourselves launched, consumer books on women’s health were rare;  today an Amazon search shows, 31,986.

And now it’s time to give back, people. The book is entering its next edition in 2010. (Our guest blogger Amy Romano is on the editorial team!) Executive Director Judy Norsigian writes:

Like other valuable “social benefit” organizations, Our Bodies Ourselves is facing a very difficult financial period and needs your support more than ever. As we are approaching our 40th anniversary of the first publication of Our Bodies, Ourselves, we hope that you will visit our website, consider all that we do now, and contribute to our longstanding, non-commercial, public interest work that has benefited millions across the globe. I also hope that you will forward this message to others who might value and support what we do.

If you value “e” – if you have a vision that all healthcare will evolve as far as women’s health has, because of these pioneers – I hope you’ll pitch in. Even despite these tough times and being on half salary I just gave $50. Your $5 to $5 million will help, and will honor the work they continue to do.

(And if you haven’t joined the Society for Participatory Medicine yet, do that too! Individuals are just $30 a year!)