Did you know that a major aspect of the Affordable Care Act (aka the health reform legislation) was significant funding to revamp primary care? I’m embarrassed to say I didn’t. There’s $10 billion (with a B) in funding for research in the first ten years on new models of primary care, and another $10 billion to support proven improvements.

That’s $20 billion, the same amount as the health IT incentives that have gotten so much publicity. But almost nobody has heard of this. 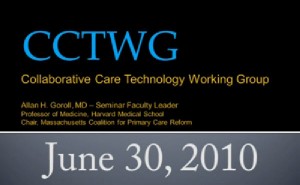 The group’s purpose is to accelerate doing something useful, promptly to make good use of that money: getting some minds together to do hard work, advancing the common perspective of what collaborative care can be, so that products developed for this movement can have a shorter learning curve. Their concept of “collaborative care” sounds an awful lot like participatory medicine to me:

Several members of the Society for Participatory Medicine attended the organizing meeting on June 30: Susan Carr of Patient Safety & Quality Healthcare, Janice McCallum of Health Content Advisors, and Lisa Gualtieri of Tufts. It was a fast-paced two hours. At bottom I’ve pasted in the tweetstream. (Non-Twitter users, please pardon the jargon; I think it’s all understandable. The things starting with @ are people’s Twitter names.)

The co-founders are Alan Goroll, MD, who was deeply involved in drafting the legislation in Washington, Tom Iglehart of Care Commons, and Anne Marie Biernacki, co-founder of AdhereTx. The slides presentations are posted on their blog, and an informal 17 minute video (so-so lighting) of Dr. Goroll’s presentation is on their About tab. Please watch that video. And notice how often “patientparticipation” comes up. It’s clear this is an idea whose time has come.

Caveat to potential members – as the tweets & video show, this is not a “subscription” to come watch the events – this is a hard-nosed working group, with substantial homework assignments and a $795 membership fee. The co-founders are looking to select a good mix of people who want to get things done, created, delivered, in use. And as the tweets say, they’re considering other forms of membership: the purpose of the price is not to be exclusionary, it’s to be action oriented.

After the eons of debate that got nowhere, I could use some action! Good luck to them. And since it’s about patient participation, let’s hope there’s a strong patient voice.

Here are the tweets, harvested from www.WTHashtag.org and edited a bit for clarity [edits are in brackets].  Please comment to question or clarify things – my tweets ain’t perfect! Dr. Goroll’s words in the video trumps anything in the tweetstream.

@ePatientDave: IBM has studied global HC for its employees & tweaked for years – have data from employees in 100+ countries

@ePatientDave: Allan Goroll MD: “If we can say anything about HC it’s that it’s complex. Washington is starting to get it.”

@ePatientDave: Goroll: health IT has no economic benefit until it gets to *decision support*

@DanRPG: Wow US is ranked 25-35th in WHO measures of quality & healthcare

[Around 9:30 in the video] @ePatientDave: Thank g-d  Goroll’s saying the obvious about what happened when Mass added universal care… [A ton of new people have access to care, call primary docs, find they’re full, so they go to local emergency dept for non-emergency issues.]

@ePatientDave: Problem was that the newly insured couldn’t get a primary so they went to EDs. Building more EDs is STUPID response.

@ePatientDave: Goroll describing intimidating experience of testifying to Senate. Yet – “There is no debate – all agree primary care important”

@ePatientDave: not patient participation in a silly way like a do-it-yourself kit; when yr preferences & thoughts go into decisions

@ePatientDave: Next ingredient: Decision support; monitoring [wisely] (story of how F-16 was too complex – too much info [on the displays; pilots were overwhelmed and crashed; F-22 had much simpler/clearer displays]); payment reform [how to tie it in so it supports what we need – our current payment system is what you’d expect – high costs low value – our current system pays very well for expensive things not for quality things]

@ePatientDave: Goroll’s next: review a key component of reform law relevant to this group; then relevant #meaningfuluse criteria

@ePatientDave: Goroll recounting the young Senate staffers working their butts off on writing the legislation. Praise.

@ePatientDave: Goroll’s point: Enter the primary care reform movement knowing this is NOT disputed, is NOT going to be killed.

@ePatientDave: (Goroll’s texty slides about criteria will be posted)

@ePatientDave: (I’m feeling sheepish that all this primary care stuff was in the law and I didn’t get it…but others in the room are same)

@ePatientDave: No wonder this is $10Bn – vast range of models to test to gather info on what works. Evidence-based policy decisions (!!)

@ePatientDave: Final big point: Secy of HHS can modify the program without another Act of Congress. [That’s a] Huge enabling provision.

@ePatientDave: Tony Rodgers of AZ Medicare has been hired as director of CMI

@ePatientDave: (In all I’ve heard/read about #MeaningfulUse this is the clearest it’s ever been to me. This guy’s smart :–))

@lisagualtieri: Agree RT @ePatientDave (In all I’ve heard/read about #MeaningfulUse this is the clearest it’s ever been to me. This guy’s smart :–))

@ePatientDave: Vendors are being required now to take time out from “liability reform” to make their systems safer instead (!!)

@ePatientDave: Man am I wishing I brought my flipcam

@lisagualtieri: The devil’s in the details. “Provide patients with…” was a theme but how? Is that why IBM is sponsoring?

@ePatientDave: Goroll’s finished. Future meetings will NOT be lectures like this – there will be homework & mtgs will be for discussion and work.

@ePatientDave: This is intended to be a serious incubator group not a “symphony subscription” like “I’ll come watch the Mozart series” :–)

@ePatientDave: MAN am I glad I came to this. Never had the inside story of the legislation & work since then.

@ePatientDave: Tom Iglehart up now (CareCommons) – compares HC to transcontinental RR after Civil War. Ambrose book “Nothing Like It in the World”

@ePatientDave: Iglehart laying out the purpose of this group – lengthy meaty list.

@ePatientDave: Big point here is that the legislation seriously enables getting things done.

@ePatientDave: Membership in this series is a 10 month commitment $795. Expecting 30 participants.

@garyschwitzer: Go forth and spread the word.  RT @ePatientDave: I gave away 2 of yr “10 criteria” mousepads from @FIMDM already

@ePatientDave: Future membership types are contemplated. Purpose isn’t to be exclusive it’s to be action oriented.

@ePatientDave: Iglehart cites Jefferson quote on idea-sharing http://thinkexist.com/quotation/he_who_receives_ideas_from_me-receives/196063.html [“He who receives ideas from me, receives instruction himself without lessening mine; as he who lights his taper at mine receives light without darkening me”]

@ePatientDave: Whoof. I haz the $795 brain hornies for joining this group.

@lisagualtieri: Is “meaningful use” the best term?  #HCR

@lisagualtieri: @DrTonyaH Where are you, what Goroll described about decision support is what you do

@ePatientDave: Q&A: How will u make sure this group won’t be myopic lacking insight from outside the industry?…

@ePatientDave: A: “Are there any patient advocates in the room?” Ahem. :–)

@ePatientDave: Time’s up – that’s a wrap!