Mobile, Social Health at the National Library of Medicine

Update: The NLM released new widgets on July 14, along with a redesigned MedlinePlus site. (Read @eagledawg‘s take on these new tools, as well as her response to this post.)

Speaking to the senior staff of the National Library of Medicine last week was like going before the best kind of murder board. Picture it: 30 of the nation’s smartest health information mavens around a polished conference room table, asking me sharp questions, suggesting new lines of inquiry, and offering their own insights. In other words, heaven. 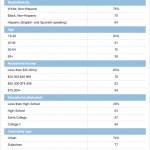 ping-off point was the Pew Internet Project‘s latest research on internet penetration, mobile use, and the social life of health information. Here are my notes from Thursday’s meeting and some research questions I’m considering:

One of my hosts, Robert Logan, had seen my Patient Is In speech at Health 2.0 last fall and asked me to address similar issues — how people become activated seekers of health information. He also complimented the Pew Internet Project’s steady stream of data releases, which we are able to maintain because of the generous support of the Pew Charitable Trusts and the ingenuity of our small staff to squeeze the most out of our research budget.

My first illustration was a perfect example of a frequently-updated Pew Internet resource (internet penetration in the U.S.) and how the data can be viewed through a health lens.

Many health organizations, including the NLM, want to reach different age groups — online, offline, on a mobile device, etc. This chart shows that age continues to be a significant predictor for internet use: 93% of 18-29 year-olds go online, compared with just 38% of adults age 65 and older, for example. Education is another undeniable force: 94% of those with a college degree use the internet, compared with 63% of high school graduates (and just 39% of adults with less than a high school education).

I noted, however, that although most of our “oldest old” and least-educated are offline, they may have what we call second-degree internet access via their loved ones and friends. Half of health searches are conducted on behalf of someone else, not the person with their fingers on the keys, for example.

All the data in that deck is from 2008-9, but the trends hold true for 2010 (with significant increases across the board for social network site use).

When segmenting the online audience, remember that most internet users age 65+ stay in the shallow end of the pool — email and info-gathering — while younger internet users tend to venture to the deep end — uploading video, creating blogs.

There are exceptions, of course, and Pew Internet is tracking what may be an X factor: wireless internet use. We have identified a “mobile difference“:  wireless connections have a significant, positive effect on an internet user’s likelihood to engage in social media.

I noted that we also have identified what might be called a “diagnosis difference.” Our research on chronic disease found that living with such a diagnosis also has an independent, positive effect on a person’s use of social media for health.

This inspired a good sidebar discussion about patient activation, and what role it plays in online engagement with health. The Center for Studying Health System Change has found that just 41% of patients have the knowledge, skills, and confidence to manage their health, with cancer being at the “most activated” end of the spectrum and depression at the “least activated” end. (For background, please see “Development of the Patient Activation Measure…” For an overview of what I think, please see “Mobile could be a game-changer…” And I’d welcome other views and citations.)

Forrester has another helpful way to picture social media engagement: as a ladder, which people can climb up or down as their usage changes. I included the illustration from Josh Bernoff’s blog post, “Social Technographics: Conversationalists get onto the ladder” as my third illustration. 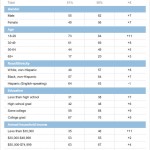 Next I featured two charts from my colleague Aaron Smith’s report, Mobile Access 2010.

First, I discussed the data showing changes in wireless internet use by demographic groups between April 2009 and May 2010. For example, in the spring of 2009, 57% of African American adults went online with either a wifi-enabled laptop or a cell phone. In 2010, their use jumped to 64% — a notable increase in just one year.

I summed it up in a tweet: “Information purveyors: Go mobile. Everyone else is: http://pewrsr.ch/Mobile2010” 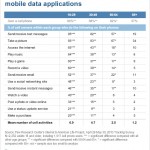 The next chart focused on mobile activities among various age groups, particularly the stark differences between adults ages 18-29 and everyone over 30.

Fully 95% of 18-29 year-old cell phone owners send and receive text messages (and we know from our Teens and Mobile Phones research that the volume of texts is probably pretty high). Forty-eight percent of 18-29 year-old cell owners say they access social network sites on their mobile phones. And 40% of this age group watches video on their phones.

Cecilia Kang‘s Washington Post article, “Going wireless all the way to the Web,” illustrates the trade-offs some people are making between small-screen wireless options and the luxury of a big-screen connection. As one 16-year-old said of sipping information through an iPod: “It’s way cheaper than a computer, that’s for sure,” he said. “But you also have to have a lot more patience.”

Looking at this data is like watching the effects of erosion on a coastline: the information landscape is shifting and the changes are picking up speed. As I’ve said before, if your organization’s information isn’t accessible and readable on a small screen, it’s not available at all to some groups. Now is the time to make changes to online services to account for both the popularity of mobile access and the way it is changing us as internet users. 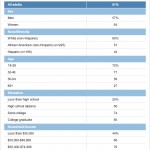 Two-thirds of those who look online for health information usually talk about it with someone else. The Pew Internet Project will focus on research questions about the who, what, where & when of  those health conversations in an upcoming survey. But the questions are pertinent to the NLM’s mission, too: What are people saying? Is the NLM helping to seed the conversation? How are you contributing to the spread of facts, the spread of science, the spread of evidence?

Since these demographics were nothing new to this group, I quickly moved on to our more unique data set, which focuses on people living with chronic disease.

One-third of U.S. adults are living with a heart condition, lung condition, high blood pressure, diabetes, cancer, or a combination of those diagnoses. Of those, 62% have access to the internet, compared with 81% of adults who report none of those conditions. 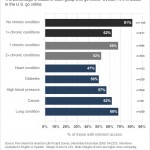 However, once someone does have internet access, chronic disease has an independent, positive effect on an internet user’s likelihood to use social media for health: to blog, to contribute to online health discussion, to access hospital reviews, doctor reviews, and podcasts. (For more on this topic, please see Chronic Disease in Data and Narrative.)

My take-away: Keep the reality of the current population in mind, but don’t count out the power of a life-changing diagnosis to affect the way someone gathers and shares information. 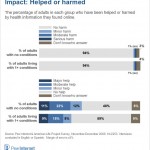 My closing slide is one of my favorite charts from our report, Chronic Disease and the Internet. Few people report harm when it comes to health information online, many more people report that it has helped them or a loved one.

The ensuing discussion allowed me to bring up some of my favorite examples outside the Pew Internet Project’s research scope:

Nicholas Christakis & James Fowler’s book Connected showed how obesity can spread through a network – but so can happiness. Behavior – both good and bad – can be catching. How can the NLM seed conversations happening online and offline, to spread good information and good behaviors?

The FDA and CDC teamed up to spread the word about the Salmonella outbreak last year, fanning out across platforms to get the word out, including the development of a recall widget. How can the NLM leverage the power of mommy-bloggers or their equivalents?

Health 2.0 Europe was alive with debate about government’s role in health and health care, including some heated exchanges about how to oversee the quality of online information. What if the NLM harnessed American ingenuity and the EU’s information quality focus? One answer: Pillbox

Google features MedlinePlus among the first results for health condition searches, as we’ve discussed on e-patients.net. Now Google’s top results for drug searches also yield links to NLM pages, as reported by Eileen O’Brien on the SirenSong blog. Should the NLM seek more placements such as these? Should the NLM maintain its own brand or should the National Institutes of Health emerge as the stronger, overall brand?

Procter & Gamble, among other companies, is scaling up their use of social media and cutting back on traditional market research. Their new research motto can be summarized as: “Listen more than ask.” How can the NLM harness the same techniques?

And as I so often do, I closed with this question: Health is social.  Health is mobile.  What are you spreading?