We talk a lot here about taking, owning, or reclaiming responsibility for our health and its care. If we ever update the e-patient white paper I want to include an area where we’re sometimes robbed of control at the most intimate time: death, and the months and years before.

Yesterday I posted about the Tuesday night opening by lung transplant recipient Charity Tillemann-Dick, who inspired us to a standing ovation. Wednesday opened with an even stronger response to a new performance by poet/performance artist Sekou and his partner Steve Connell. I can best describe it as a powerful jazz poetry duet about our final years and the onset of death. Here’s a snapshot from Martha Stewart’s Tweetstream. (Yeah, that Martha.) 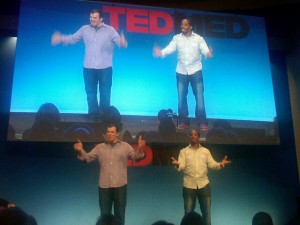 Trying to describe this experience is like trying to describe …. I don’t know, surfing? Swimming? A Rolling Stones song? The words are a feeble proxy – that’s why the TED and TEDMED videos are so great. They’ll be out in a few months. For now here’s my best shot. (Commenters who were there, help.)

They stood side by side. One at a time, then together, they launched a “tic, toc, tic, toc” that conveyed the unstoppable march of time as life goes by. Time after time they brought us to the end of life, then pulled back – to birth, to other stages, then back to the end, to “is this it?” and confronting the medicalizing of death, and wanting some sense of control. At least twice I thought it was over but they pulled back for another cycle, deeper and broader.

I’ve never seen a more emotionally compelling performance, especially in just 20 minutes. They swept up the audience, evoking feelings of being dragged toward death, but pulling back, wanting to own and direct the experience. They tied death to birth – both are natural (“they take care of themselves”). They made clear that our turf as empowered humans is to be responsible for what happens between – and to not let control be taken away.

At the end audience response was even stronger than Tuesday’s rolling ovation: this time everyone leaped up at once. It was visceral; some cheered.

I was left with a clear, strong feeling that not only is my life mine, my death is too. I recalled Paul Grundy’s story here, two years this week, of his father’s overtreatment – a pacemaker inserted near the end that he’d specifically said he didn’t want. I thought of my own father, who was denied the death at home he’d wanted, because his long term care facility gave us half truths about hospice.

This is wrong. This steals our power from us, at the very end of life, sometimes for paternalistic reasons but too often for profit.

Bravo to Sekou and Steve. And they set the stage for another talk Thursday, by Alexandra Drane of Eliza Corp. 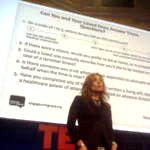 Alex shared the Engage With Grace story. Her sister-in-law “Za” died at 32, and through forceful family action was allowed to go home to die, where her young daughter was able to cuddle with her. Today the daughter, age 9, loves to be told again how she was the last thing her mother saw. She implored us to “have the talk” with family and friends, the five questions about our end of life wishes, and to have it now, long before we think we’ll need it.
_________

This is my first TEDMED, and it’s different from other events this fall. It seems that TEDMED selects speakers who will amaze and compel. Tuesday night Charity did that, with how she defied death; Wednesday morning Sekou and Steve defined our right to own our death; this morning Alex Drane brought it home with a story of a death at an age not much more than Charity’s.

A lot is going on in healthcare, and a lot of people are drawn to different aspects. For me, nothing inspires more than people knowing themselves and being free to express it: “This is who I am, and this is how I want my life to go.” I didn’t expect death at TEDMED, but I’m sure looking forward to these videos.

[Note added Nov. 11: We later learned that Sekou and Steve assembled this performance the night before. I’m sure they’d been thinking and working on it before, but the performance itself was jazz: live, hot, and now.]