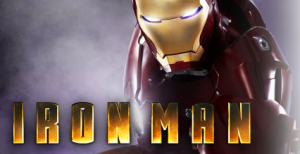 Perhaps because my world-view is shaped by the escapades and explanations of active little boys, I often speak of super-heroes in relation to health care.  I listen daily to tales of poisonous spider bites, DNA mutations and dangerous levels of exposure to radiation.  And unlike the conversations I have with my medical advocate friends, these stories end relatively well.  These people, so afflicted, do not die or become gravely ill, instead, they become super-heroes.

Yes, these characters get to live, but they often must deal with anguish and regret.  Within their memories they relive again and again the moments that led to their fates.   They fight crime and evildoers in their Super-hero personas, even as they hide secretly among us with regular jobs, as photographers, industrialists and doctors.  We never know who are the Super-heroes among us.

Not long ago I had the honor of meeting many real-life Super-heroes at the IHI (Institute for Healthcare Improvement) Forum in Florida.  On December 4, 2010 IHI invited 50 patient advocates to Orlando, Florida to attend a pre-conference meet-up and candle light vigil prior to the Patient Summit on Sunday December 5.  That day we were nameless.  We sat in a circle and spoke of the love and loss inside a room in the Gaylord Resort.  We soon left that room and followed Dale Ann Micalizzi outside to light four candles in memory of those we had lost.

Do you know Dale Ann Micalizzi?  Her son Justin died suddenly after a surgery to drain an ankle infection.  She created the foundation Justin’s Hope in an attempt to create patient centered care and better communication with families.  She goes out every day and fights injustice.  She spreads awareness about the dangers of infection.  She helped bring us together in person at IHI and on the Internet through the open Facebook group IHI Patient Activists.

She recently told us some really good news. She will be one of the co-chairs of the IHI forum this year.  I am so glad that IHI is taking patient centered care so seriously.  Dale is not only invited to the table, she is placing the table settings.  She is helping create a “justice league” of empowered healthcare activists.

So due to the work of folks like Dale Ann Micalizzi, the Super-heroes are losing their secret identities. 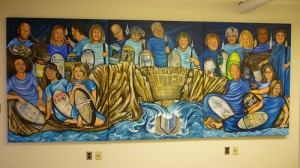 Regina Holliday's painting, "Give Us Our Dammed Data" (Photo by Cindy Throop)

When I painted the piece “Give Us Our Dammed Data” [referring to how our health data is dammed up], I had to ask Helen Haskell for a potential list of patient advocate authors.  There wasn’t an IHI Patient Activist Facebook group.  We did not know about each other and what each advocate had done to create change.   We were spread throughout the world, and our identities were unknown.

Recently, I had the pleasure of watching the 2008 film Iron Man.  I was especially intrigued by the portrayal of the character Tony Stark.  After being captured and injured by the people that used the weapons systems he had created, Stark’s character takes a 180.  He decides to fight the bad guys anyway he can, and does so in an iron suit with a literally “broken heart.”

I am a Marvel Comics fan from way back, but this character didn’t really interest me until I watched this movie.  You see, I was rather bothered by his moniker “Iron Man.”  Really? Iron is so brittle, how can that ever compare to, say, the man of steel?

Can we have brittle super-heroes that have electronic hearts?  Yes, we can.  Can patients who have been injured and are bitter create a world with patient centered care? Yes, they can.

I was most impressed at the end of the film.  Tony is considering reading a prepared statement explaining away the elements of the battle and excusing the antics of this fellow in the Iron suit.  In front of a crowd of reporters, Tony abandon’s the contrived remarks and exclaims, “I am Iron Man.”

With this statement he has abandoned a secret identity.  He is a person and a super-hero.   Tony Stark was just like all of the wonderful people at IHI who stood proudly before us wearing badges that said their name and affixed to a blue ribbon stating “Patient Activist.”