Note: Although currently not a member of the SPM, I have been involved, since its inception, with Tom Ferguson and others, in the creation of the e-patients white paper . I am also one of the co-founders of the SPM and one of the volunteers who created the infrastructure and policies of JOPM, an Open Access, peer-reviewed publication where articles are published at no cost . Today, I use the privilege offered to the founders of this group to post on e-patients.net in my name only and not representing SPM in any way.

Update: “Support the Open Access Movement: Stop the Research Works Act!”, a new online petition,  has been setup to allow anyone to voice their opposition to the terrible proposed piece of legislation known as H.R. 3699/RWA. Please, spend a few shirt minutes there and let the world know of your opinion! 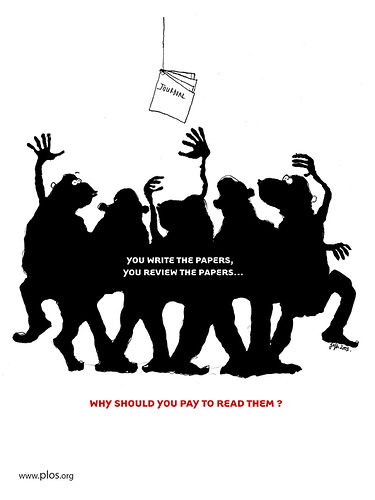 In 2008, in culmination of years of effort and community interaction, the National Institutes of Health made all federally-funded research publications openly accessible by publishing the NIH Public Access Policy. The purpose of mandating such open access, at a maximum 12 months after publication, was to ensure that the findings are accessible to all their potential users, not just (as in the print era) to those whose institutions can afford subscription access to the journal in which they happened to be published. Opening access maximizes dissemination, a key element to maximize scientific discovery (see the great 2008 presentation by Elias A. Zerhouni, M.D., NIH Director, to the Subcommittee on Courts, the Internet, and Intellectual Property). Of course, ACOR members were highly supportive of the proposed policy and provided a significant number of comments during the initial RFI period.

In 2009 the policy was made permanent by the Omnibus Appropriations Act:

SEC. 217. The Director of the National Institutes of Health (“NIH”) shall require in the current fiscal year and thereafter that all investigators funded by the NIH submit or have submitted for them to the National Library of Medicine’s PubMed Central an electronic version of their final, peer-reviewed manuscripts upon acceptance for publication, to be made publicly available no later than 12 months after the official date of publication: Provided, That the NIH shall implement the public access policy in a manner consistent with copyright law.

Compliance with this Policy remains a statutory requirement and a term and condition of the grant award and cooperative agreement, in accordance with the NIH Grants Policy Statement.

Right now, the great gift to the public that is the NIH Public Access Policy, is under serious attack with a proposed piece of legislation. H.R. 3699, aka The Research Works Act (RWA) would prohibit the deposit of the manuscripts mentioned above, seriously impeding the ability of patients and caregivers, researchers, physicians and healthcare professionals to access and use this critical health-related information in a timely manner. Oppose H.R. 3699!

As any person looking for information of significance about cancer knows, having access only to the abstract, and not to the full text article, is insufficient.  Ironically & symptomatically, the 2004  article by Zerhouni, then-director of the NIH, entitled “NIH Public Access Policy” explaining the rationale behind the proposed policy, is behind a paywall and demonstrates the extent of the problem!

In fact I have been working for a while with Peter Murray-Rust from Cambridge, leading thinker behind the Panton Principles & guru of large scale text mining of scientific publications, to push further the extraction of disease-focused information from Open Access articles, because, as Peter says “Open Knowledge Saves Lives! Close Access Can Kill!”

Presented “To ensure the continued publication and integrity of peer-reviewed research works by the private sector” the bill states:

No Federal agency may adopt, implement, maintain, continue, or otherwise engage in any policy, program, or other activity that (1) causes, permits, or authorizes network dissemination of any private-sector research work without the prior consent of the publisher of such work; or (2) requires that any actual or prospective author, or the employer of such an actual or prospective author, assent to network dissemination of a private-sector research work.

If public tax money is used to fund research, that research becomes “private research” once a publisher “adds value” to it by managing the peer review. Since that public research has thereby been transformed into “private research,” and the publisher’s property, the government that funded it with public tax money should not be allowed to require the funded author to make it accessible for free online for those users who cannot afford subscription access.

Because of the highly successful public access policy, millions of Americans now have access to vital health care information from the NIH’s PubMed Central database. Under the current policy, more than 90,000 new full-text biomedical manuscripts are deposited for public accessibility each year. For all of us who are “scholarly poor” — a term coined and defined by Peter Murray-Rust as “denied access to information freely given by scientists in their publications” — the policy may have been the most important piece of legislation favoring the emergence and sustainability of Participatory Medicine. This takes increased significance now that the only inflation in health care spending is the 19% yearly increase in individual spending, forcing people to pay much closer attention to what is being done to them by any professional actor of the medical system. As I wrote  2-1/2 years ago “Will The Great Recession Create Millions of e-Patients?“, what I had not imagined was the devastating impact of local budget squeezes on public libraries’ hours of operations, which have been severely hit across the nation. Since publishers use the access to public libraries as an excuse to close universal internet access, their argument looks pretty weak for the foreseeable future.

Before reading further, remember the definition of Participatory Medicine:

a movement in which networked patients shift from being mere passengers to responsible drivers of their health, and in which providers encourage and value them as full partners.

How can you be a responsible driver of your health if you don’t have direct access to all information? That’s why Dave has been fighting for his damn data and similarly why ACOR has been engaged in multiple efforts to maximize the dissemination of any and all scientific publications that relates to an ACOR group condition.

Seeing a corrupt travesty of the democratic process used today to promote the interests of a few gatekeepers at the expense of millions of people is very disturbing. The NIH and other agencies must be allowed to ensure timely, public access to the results of research funded with taxpayer dollars. Please oppose H.R. 3699. You’ll be in great company!

For example, Tim O’Reilly, who has been a main witness of the power of Openness in computing  finds H.R. 3699 objectionable:

I oppose H.R. 3699 (“To ensure the continued publication and integrity of peer-reviewed research works by the private sector.”) because it is a classic example of “regulatory capture” by an industry that is feeding off of government largesse.

It is a frontal attack on the open access movement, which scientists are increasingly seeing as critical to the further progress of science.

[…]I strongly suggest that the authors of this bill consult the Panton Principles, put forward by a group of scientists at Oxford University, or read Michael Nielsen’s new book, Reinventing Discovery, about the importance of open access to the future of science.

Tim’s last sentence may need some explanation, which thankfully has been provided by Microsoft researcher and grand guru of social media’s influence on the youth, danah boyd, in her December blog post Save Scholarly Ideas, Not the Publishing Industry (a rant):

The scholarly publishing industry used to offer a service. It used to be about making sure that knowledge was shared as broadly as possible to those who would find it valuable using the available means of distribution: packaged paper objects shipped through mail to libraries and individuals. It made a profit off of serving an audience. These days, the scholarly publishing industry operates as a gatekeeper, driven more by profits than by the desire to share information as widely as possible. It stopped innovating and started resting on its laurels. And the worst part about it? Scholars have bent over and let that industry continuously violate them and the university libraries that support them. [..]

WTF? How did academia become so risk-adverse? The whole point of tenure was to protect radical thinking. But where is the radicalism in academia?

Ironically, of course, it’s the government who is trying to push back against the scholarly publishing’s stranglehold on scholarly knowledge. [..]

Please, I beg you, regardless of whether or not we can save a dying industry, let’s collectively figure out how to save the value that prompted its creation: making scholarly knowledge widely accessible.

In all fairness I must present the opinion of those who think H.R. 3699 is a step forward. You may not be entirely surprised that the most supportive is none other than the Association of American Publishers and its Professional and Scholarly Division. This is what they had to say:

The Research Works Act will prohibit federal agencies from unauthorized free public dissemination of journal articles that report on research which, to some degree, has been federally-funded but is produced and published by private sector publishers receiving no such funding. It would also prevent non-government authors from being required to agree to such free distribution of these works. Additionally, it would preempt federal agencies’ planned funding, development and back-office administration of their own electronic repositories for such works, which would duplicate existing copyright-protected systems and unfairly compete with established university, society and commercial publishers. [..]

So, here we have it! I’ll let others describe what stands behind the term “private-sector research publisher” here and here (good reads!). What strikes me is that in the entire press release there is not a single mention of the American people at large. The publishers want to stop the public from having easy access to scientific articles. The last paragraph really glows when paralleled with Tim’s last sentence “Please don’t write laws that protect 19th century industries against 21st-century disruption!”

To add insult to injury look at the two co-sponsors of the bill.

Darell Issa is the wealthiest member of congress, with an estimated fortune of between $165 million and $451 million in 2010. I doubt that paying $32 to $40 for a scientific article makes a dent in his monthly spending, unlike the situation for most Americans. What is completely incomprehensible is that Darell Issa is avowedly supporting Openness. His Twitter page says it all: “I also greatly enjoy an #OPEN, accessible & uncensored internet.” The Atlantic wondered “Why Is Open-Internet Champion Darrell Issa Supporting an Attack on Open Science?” a post ending with “And that’s just it. If the goal is protecting the publishing industry, this bill’s a winner. But for those interested in improving access to scientific research, they should stay far, far away.” Do you start to see a trend in the objections to this nasty piece of legislation?

It is inexcusable that a simple idea – that no American should be denied access to biomedical research their tax dollars paid to produce – could be scuttled by a greedy publisher who bought access to a member of Congress.

So I urge you to call/write/email/tweet Representative Maloney today, and tell her you support taxpayer access to biomedical research results. Ask her why she wants cancer patients to pay Elsevier $25 to access articles they’ve already paid for. And demand that she withdraw H.R. 3699. [emphasis added]

Email: Use this form