“That means there is hope” – Atul Gawande at #CISummit 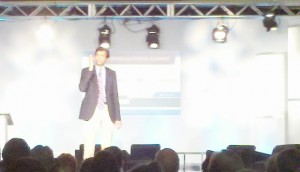 Edits made in the discussion at bottom, 1/27.

Deservedly famed surgeon & author Atul Gawande just put together a bunch of thoughts into a potent summary. Paraphrasing from memory:

Instead, we’re talking about what works.  [This one was his point, but not his actual words.]

This is immensely important, because so often we hear people say things that the data don’t support:

A major issue is the providers who aren’t even trying to do what works – and the consumers, employers and insurance plans who don’t react to this data by taking their business elsewhere, putting costly and ineffective providers out of business.

If patients and clinicians are going to be fully empowered, collaborating to create better outcomes, we need to share this awareness with each other. Be empowered and speak up – don’t act powerless, like “there’s nothing we can do – the system is a problem.”

You can watch the summit live here and follow the twitter feed at #cisummit. The event’s web page is HCIDC.org; agenda is here.