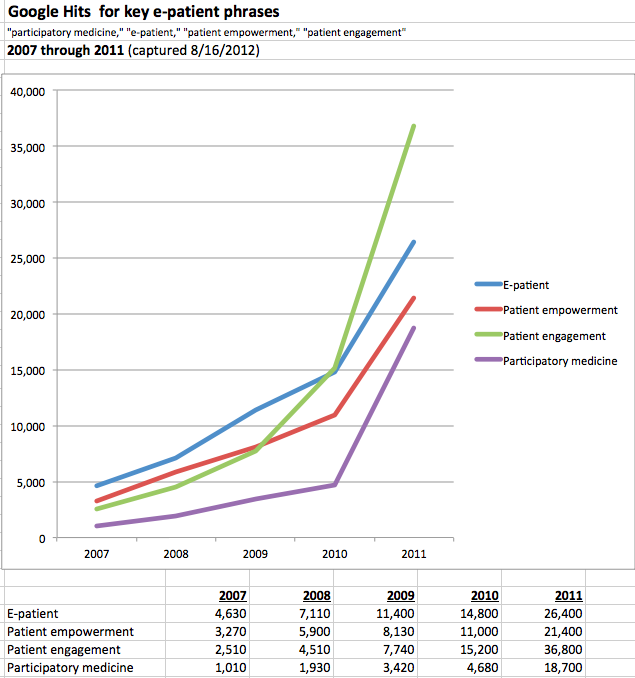 We’re not in it for “the eyeballs,” as they say in the world of website marketing: this isn’t a blog that obsesses about pageviews, unique visitors etc, for purposes of selling ads. (We don’t do ads, we don’t do link exchanges, etc.) But the Society for Participatory Medicine sure is working to increase the world’s conversations about, well, participatory medicine.

So rather than focus on traffic to this site, I like to count how many times the phrases we care about show up anywhere in Google search results. Once or twice a year I search for these phrases, and record how many new pages Google says they’re on: 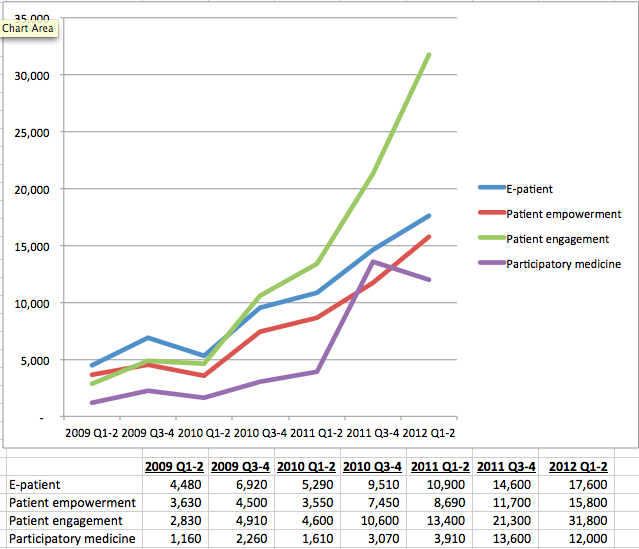 I thought you’d never ask. To make sense of that we have to break it into half-years.

It seems 2012 is sure strong: patient engagement has 31,000 new hits so far this year, almost as many as all of last year. Again, I’m sure that’s Meaningful Use, plus PCMH regulations (patient centered medical home), which (especially for PCMH 2011) require patient engagement.

Interesting: participatory medicine had a big uptick last fall, matching the peak in fall of 2009.  I’d speculate that both were because of the fall conference season, but to assess that I’d have to plow through the search results – not gonna happen.

Bottom line, we’re zooming in 2012. Keep it up: change the world’s conversations!

In any metrics, e-patients and clinicians and geeks  need to be careful about what got measured. As I’ve done this for a few years, I’ve discovered that Google keeps changing its rules: last year this time, previous years’ numbers became different, so they must have changed what they count

I speculated that maybe their crawlers had found a bunch of extra stuff, but this year the numbers dropped by at least 5x, across the board.

p.p.s: If you want to dig into that issue and you’re at grad-student level, a good book is Between the Lines, by SPM member Marya Zilberberg MD. It’s not for the faint of heart, but if you’re into meaty statistical thinking, it’ll give you plenty to chew on! She documents, at length, the many ways researchers may not be measuring what they think they are, and might even not be measuring something worth measuring.