My schedule only allowed me to attend Day One of the fantastically rich Medicine 2.0 Congress being held this weekend in Boston. I thought I’d share my impressions and notes in case they spark inspiration for other people, as each presenter and hallway conversation did for me.

When I arrived at 7:30am, there was no line at the registration desk, so I grabbed my badge (created in the brilliant style of last year’s, as designed by Larry Chu) and started chatting with people.

I had a wonderful talk with Michelle Eberle, a medical librarian working the National Library of Medicine table (updated thanks to @SeerGenius). She told me that one of the most useful Pew Internet data points is this one, from a 2009 report:

Now thinking about all the sources you turn to when you need information or assistance in dealing with health or medical issues, please tell me if you use any of the following sources…”

She uses it to advocate to her fellow librarians to keep books front and center, even as libraries adapt to the new digital realities. I pointed her to Pew Internet’s Libraries topic page as well as our Libraries in the Digital Age blog.

Gunther Eysenbach, founder of Medicine 2.0, opened the event right on time at 8am, as he said, “because I’m German.” I believe that the organizer deeply influences the personality of a conference. In this case, it is an academic conference, welcoming of researchers, clinicians, patients, and entrepreneurs (roughly in that order). There is also a sense of humor and adventure at Medicine 2.0, which are also aspects of Gunther’s personality (ask me some day about the time he dropped into John Lester‘s Second Life demo as a half-naked avatar).

Jamie Heywood’s keynote was perhaps the 30th speech I’ve seen him deliver and, as always, it was an inspiring indictment of the status quo in medicine. If you haven’t seen him tell the story of PatientLikeMe’s founding, his TEDMED talk is a good introduction. You could still see the fire in his eyes yesterday as he described fighting for his brother’s life, but now he’s banked the coals and is in for the longer fight of saving health care. Hopefully his talk was captured on video and will be released soon.

I stayed in the auditorium for the next installment of the PatientsLikeMe show — Paul Wicks, director of research and development, who joked that Jamie gave the 30,000-foot view and he, Paul, would give the 6 foot 2 view. It also was an enlightening talk, tuned just right for this audience, with insights about how to scale research that asks so much from participants. Here’s my capture of one key “how-to” slide:

Sally Okun, PatientsLikeMe’s Health Data Integrity & Patient Safety Manager, followed with what she called the “sea-level view” — a focus on patients themselves. I especially liked her description of how they started with two “buckets” (symptoms and treatments) but responded to their users’ wishes to track many more aspects of their lives. The new bucket list includes:

(Note: in no particular order on her slide.)

She closed with a poem she wrote: “To Learn / listen well / to impressions / voiced by patients / first”

At 9:45am I went to a session entitled “Building virtual communities and social networking applications for patients and consumers.” My phone was dead so I couldn’t tweet, but there sat Gonzalo Bacigalupe in the front row, a health geek scribe who was not letting anything get past him, so I rested my fingers.

Colleen Young, manager of the Virtual Hospice community, presented her lessons on “How to Build and Sustain a Thriving Online Health Community.” She has promised to upload her slides, , but here are a few notes I took:

Constance Johnson, of Duke University, then presented findings from an “Interactive Virtual Environment for Diabetes Self-Management.” Researchers built an island in Second Life and invited people living with diabetes to join it. I’m personally not a big fan of spending a lot of money and time building such things when simpler solutions are available, but I was intrigued by a few of the findings:

She mentioned that when the study ended, many participants begged them to keep the island running. I asked what their plans are — is it possible that they’d commercialize it with advertising instead of relying on grants? Yes, she said, it’s possible, but her team is now developing game interventions, shifting their focus to this more popular platform.

Daniel Swayze, of the University of Pittsburgh, presented on “How Digital Diabetics Use Social Media Features in Online Patient Communities.” What I liked best about his presentation is that instead of guessing at the quality of information being shared online, he decided to study it. Bravo! I hope to be able to share his slides soon, but the key take-away for me was his finding that when outlier information is posted, the community swarms it and self-corrects.

This was one of many times throughout the day that I thought about Tom Ferguson, the founder of this blog, who was so far ahead of his time. Read what he and Dan Hoch wrote in 2005 about how patient communities self-manage and self-correct. I applaud new research being done in this arena, but let’s stand on the shoulders of giants.

I never made it to my friend Robyn Whittaker’s session on mobile health, so if anyone has notes, please share them or a link in the comments. Instead I had a hallway meeting with Bertalan Meskó, aka Berci, about the challenge of writing a book while keeping up with the usual responsibilities of a day job, a social and family life, etc. I encouraged him to notice when he writes best and to recreate those circumstances. For me, the best time to write is early in the morning. By the evening, my energy dips and I can’t even look at the screen.

I was so into the conversation that I forgot about the time — luckily Kevin Clauson walked by and asked, “Aren’t you presenting?” It was indeed 11:50 and I was the first speaker on an 11:45 panel! I jetted down the aisle and we began our session on “Patient-Provider Collaboration for Patient Safety.” That, by the way, is typical of Medicine 2.0 — every conversation I had was absorbing.

Here’s an outline of what I talked about in my 5 minute overview of Pew Internet’s latest trend data:

I touched on a few of the points I made in my Medicine 2.0 keynote last year — how broadband and mobile access are changing us as internet users, how the “diagnosis difference” makes it more likely for someone living with a chronic condition to consult social health resources. Then I shared a few data points from our 2012 survey, the results of which were just delivered last Tuesday:

My point was to show how far we have come in terms of technology adoption, social media use, and getting into the habit of sharing our opinions and experiences online. We review restaurants, hotels, movies… but not yet drugs and treatments. What if people were asked to share those experiences too? What if people used their devices to fill out safety reports? What would that look like?

I have asked my fellow panelists to comment on this post with notes or links to supporting documentation for their part of the presentation.

The discussion period was excellent and I hope that people add comments with their own impressions because I did not take notes. E-patient Dave later captured a video interview with me about a couple of the points I made about health website accreditation and information quality, so hopefully he’ll post that soon.

One link I can share is the citation for the May 2001 JAMA article I mentioned, “Health information on the Internet: accessibility, quality, and readability in English and Spanish.” It was a landmark study and people continue to refer to it. But I’ve come to view it as a map of the world in 1491, when what we really need to do is follow our equivalent Lewis, Clark & Sacagawea. The online world has changed completely since 2001. 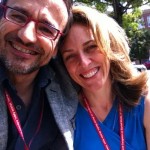 At lunch I sat on the grass outside with Claire McCarthy and we were joined by Francisco Grajales and Paul Wicks, a wonderful break in the sunshine. Gonzalo snapped this photo, which pretty much captures my mood all day.

Inside, I tried to make my way to see some of the posters, but never got past the entrance because I was having such intense and interesting conversations with people like Richard Jackson of the Joslin Diabetes Center and Reka Lassu of the University of Lugano, Switzerland.

I zipped downstairs to catch Ken Mandl’s stellar presentation about “SMART Platforms: Creating the ‘App Store’ for Health.” If you haven’t read his and Isaac Kohane’s barn-burner of a journal article, “Escaping the EHR Trap — The Future of Health IT,” do so now. The presentations in this session were too technical to describe here — just explore what Open mHealth and SMARTplatforms are doing and you’ll see.

During the Q&A I shared another sneak preview of the Pew Internet/California HealthCare Foundation’s 2012 survey findings: only 11% of cell phone owners have a health app, essentially the same percentage as we found in 2011 and in 2010. I applauded SMART’s focus on clinic-side apps and asked for the panelists reactions. Mandl said yes, their focus is on developing a platform that can be used in many ways, by many people.

Confession time: I didn’t go to any other sessions. I’d stayed up late talking with friends the night before (Alexandra Drane and her husband Antonio Bertone) and my brain was buzzing from all I’d taken in that day. Instead I had impromptu meetings with people like Jill Plevinsky and Myrna Morales, then continued conversations in the sunshine with Paul Wicks and Claire McCarthy (who very kindly gave me a ride to the airport).

I hope someone else can pick up the thread and share notes from more afternoon sessions as well as today’s speakers. The tweets (organized by the #med2 hashtag) have been incredible. Maybe someone will Storify or otherwise capture them? In the meantime, safe travels to everyone at the event — I hope to see you next year in London.