As noted in today’s earlier post, we’re starting a series of posts by SPM members who participated in last weekend’s PCORI workshop.

Kelly Young (@RAWarrior) is one of the smartest e-patients I’ve ever seen anywhere. Aside from her technical expertise (a superbly produced blog), and her administrative skill (creating the Rheumatoid Patient Foundation to address scientific and policy problems), she thinks scientifically and strategically – she doesn’t just rant or complain, she thinks about what actions can build a new future, and she aims at the underlying structural issues that make problems intractable.

This weekend I attended a PCORI workshop called Transforming Patient-Centered Research: Building Partnerships and Promising Models. I’ve watched some PCORI meetings in the past since they use live stream webcasts to provide transparency. Here are some of my impressions regarding the weekend that seemed about a week long! I think it will take another post to summarize the meeting content so I’ll try to do that for you soon as well. If you subscribe to this blog because you’re a rheumatology patient or caregiver, there are specific comments below about why this is especially important for us!

Patient-driven research: my hope for PCORI 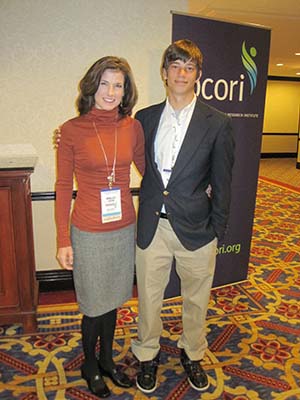 The goal of the PCORI workshop was to “help PCORI build a patient-centered research community” through five specific discussion topics listed in my previous post. Patient-centered research and PCORI itself is still new enough that there are many questions about what “patient-centered” will look like. My friend Dave deBronkart describes the historical shift with a car analogy: that patients are moving into the front seat of research.

Will PCORI do research that just incorporates more than just a dose of patient opinion? Can PCORI embrace contributions of actual patient communities who know the needs of their constituents which should be pursued in research? Will PCORI be able to demonstrate what I call patient-driven research? My exchanges with PCORI leaders lead me to hope that the answers are yes. But, there will be obstacles to overcome.

Using a research analogy that we’re all familiar with, I suggest we grow a PCORI culture using the petri dish of the online patient community via social media. Of course, this includes not only the various communities such as the #DOC (diabetes online community) and #rheum (rheumatology), but also many others who work tirelessly toward making health care work better and make sense for all patients. If you have any questions on the value of electronic media as the petri dish of choice, please read Trevor Young’s article. Thank you, (Andrew Spong).

If the current research culture were sufficient, we wouldn’t need PCORI, a new and different way to think about and do health research that will provide answers that patients want and need. The current research culture treats patients as subjects (deliberate double entendre). This weekend’s PCORI workshop spent hour after hour addressing specific ways to break the current mold and incorporate patient input at every stage.

I believe that “incorporating” patient contributions into research is a positive step and regular readers know I’ve advocated that for a long time. However, patient-driven research is truly patient centered because the patient voice is central. Patients work as partners, collaborating on goals for research from the beginning.

What do patients want to study? They know what would improve their lives.

What has previous research missed? Patients know what assumptions need to be questioned.

The dynamics are different. And a different culture will be required.

Here’s a very specific example to make it clear what kind of culture change is needed: I heard a discussion of “how we can train researchers to train patients to do research?” That is still the old approach. What we want to accomplish are collaborative relationships where power is shared. Then, goals are shared, knowledge is shared, and useful novel evidence will emerge.

Don’t worry whether patients know the acronyms of a researcher! The researcher needs to learn the patients’ language too!

I’m quite confident such interactions are possible because I’ve experienced it first-hand.

This must be established as the gold standard for PCORI.

Some really wonderful things are messy to prepare (like homemade turkey pie). I am confident PCORI will make this quantum leap in public research. But it might be messy at times.

A friend of mine was so frustrated with the way her input was treated that she left this weekend’s PCORI workshop before it ended. Regina works successfully with various government offices and she is well respected by patient advocates. Her description sounds like at times the PCORI facilitators were doing things the old way.

This is why we need to grow a new culture. Because we can’t do a brand new thing the old way. We will get the same old results.

I do realize there are many other places where patients’ opinions are not even tolerated. I’ve certainly experienced being patted on the head many times. Do you remember how upset people were that members of FDA advisory committee were drinking, talking, or using their phones during my brief testimony last May? 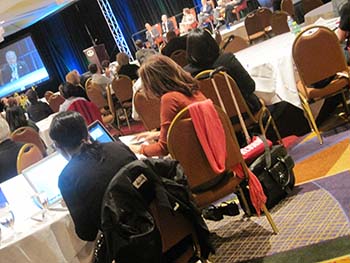 I recognized some of the social media failures described in Regina’s post and approached a couple of PCORI staff members who worked in that area. As pleasantly as possible, I asked whether anyone knew why tweets to @pcori were not replied to. The answer was, “It’s really hard to answer direct ‘ats’ while tweeting live at a conference.” If you tweet regularly, you’re choking now. If not, here’s an easy analogy: If you send out an invitation to a dinner party and the phone rings, you don’t answer it. Then when a neighbor stops by to ask why you didn’t answer the phone call replying to your invitation, you say, “It’s really hard to answer the phone while planning a dinner party.”

These guys were irritated at my question. I recovered my composure and said in my pleasantest voice, “Is there someone I can talk to about social media?” One of them handed me his card and said, “You can contact me if you have further questions.”

“Ok, thanks.” I walked away feeling angry because it was obvious I didn’t have questions; I had input.

I had blogged about PCORI and posted links on Twitter and Facebook, encouraging many others to watch the webcast and tweet about it. We had greatly extended the reach of PCORI. It was reasonable to expect that people would have their tweets read / answered. Rule number one of social media: It is not a “broadcast,” it is a dialogue. That’s why it’s called “social.”

Why should #Rheum patients care about PCORI research?

1) New approaches are needed for our underserved population. NIH funding levels are dismal for Rheumatoid disease. The Rheumatoid Patient Foundation has examined last year’s NIH spending and confirmed that as in previous years, NIH spent about 1/3 on Rheumatoid disease as it spent on other similar diseases, even with those that have much smaller incidence, often resulting in a 1 to 12 ratio of per-patient spending.

2) Patient input and collaboration will make a powerful difference in in Rheumatoid disease research. I’ll never forget the first time I talked with a researcher who told me how many different things he learned from reading what patients say in this community. Way back then, I wondered: How can they help us if they don’t know?

3) From our beginning, Sherine Gabriel has been one of the heroes to our community since her research directly addresses the mortality of Rheumatoid disease. Sherine is the Chair of the PCORI Methodology Committee and she believes that PCORI can change how medical research is conducted and applied.