Home » e-Patient resources » Give us our damn data – or at least stop screwing up when *you* use it.

Give us our damn data – or at least stop screwing up when *you* use it. 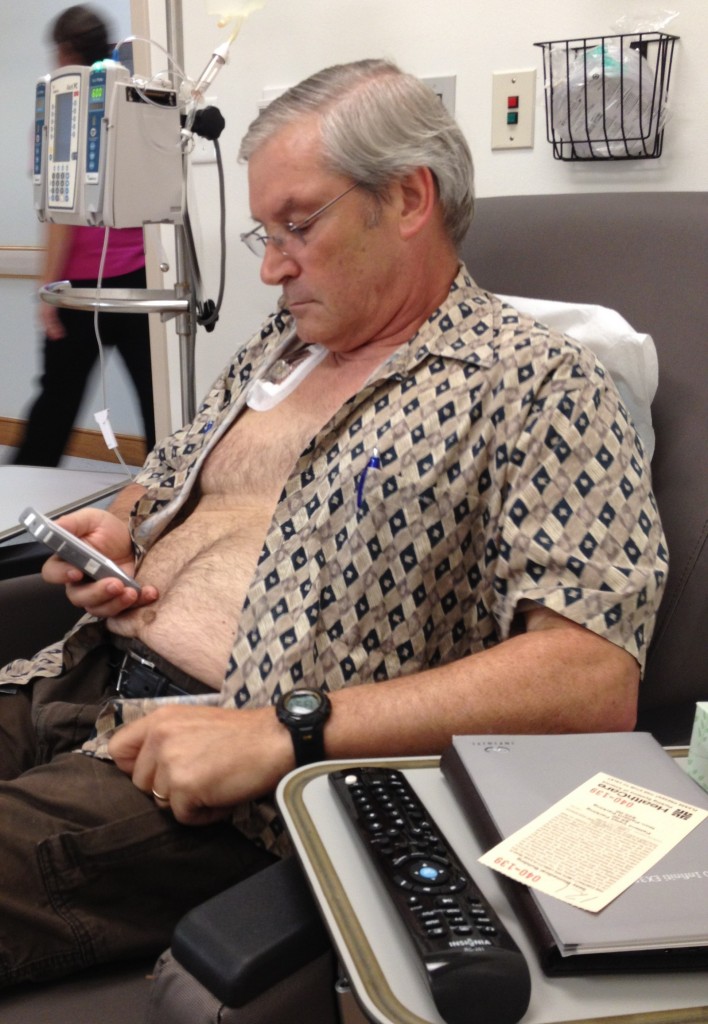 A guest post by SPM member Marge Benham-Hutchins, PhD, RN, an assistant professor of nursing informatics at Texas Woman’s University. This is an email she sent me today, citing an online discussion of the appalling death in the Health Affairs column that Susannah Fox wrote about yesterday.

IT didn’t affect the passing of Marge’s husband from cancer  [right, during chemo – “with smartphone – typical,” she says] . But she learned plenty about how far we have to go before vital information is used properly and consistently, as she shares here.
_____

As I mentioned before I planned to work on patient and caregiver access to clinical information in the inpatient setting. The article in Health Affairs was being discussed on the AMIA nursing listserv and I posted the following. Resulted in 8 providers responding about collaborating. Want you to be aware!
_____

This story also hit home with me. I recently experienced my husband’s serious illnessand passing. He was in a great teaching hospital with interoperable records. Many providers used this resource to get up to date with his complex treatments, some did not and I was the source. My daughter called me the “walking, breathing, health record” and this was accurate.

Even with the tools available many providers did not use them. As a faculty member I sometimes gave them my Professor frown and asked why they had not reviewed the record. Most were shocked I asked and mumbled something about not having the time. I often pondered this phenomenon and wondered if it was time, record organization/interface or perhaps habit that resulted in providers not using the interoperable system.

A major issue I also found frustrating was that we had been using a patient portal to keep up on tests and to track results. The system had tools for identifying trends and encouraged active patient involvement. Once my husband was hospitalized the portal was no longer used for its intended purpose (nothing was posted to the portal during hospitalization) and to get copies of blood work or test results we were told to go to medical records!

Nurses were not allowed to print from the EHR but I could look over their shoulder at the screen. Oh yeah, medical records charged $20 for up to 15 pages. I was appalled and was able to get residents to print for me but this was far from the real time patient EHR access with trending we wanted.

After over a month in the hospital we moved to a rehab facility. I made the choice based on being told that they had access to the hospital EHR. I did not realize this was only the physician and it was very limited. The rest of the providers tried to piece together his history from the content in a manila envelope! I was very upset. Then I noticed something on the wall in the room, to my disbelief it was an index card for the infamous “yellow stickers” for charges!* What a nightmare!

I am very involved with the e-patient movement and strongly advocate patients as the center of care and with 24/7 access to their complete health record. This should not stop at the hospital door. As Juliana mentioned the family member and patient are important care coordinators and should be able to see the “big picture”!

Off my soapbox for now but would love to hear from others interested in doing a collaborative study on patient access to the EHR in the inpatient environment. I think a spotlight needs to be shined on this issue.
__________

What will it take – how much must change – before medicine evolves to bring vital information that already exists to the point of care, and have providers use it? Do some clinicians need to learn a new discipline of checking the patient’s info, because it wasn’t taught in med school?

At what point does failure to use available important information become malfeasance of some sort?

* Re yellow stickers, Marge writes: The yellow stickers often symbolize to nurses the old paper based way of doing things. They were commonly used for patient charges. Everything from an IV kit to a bedpan had them and nurses stuck them to their uniforms as they worked and then put them on the index card or sheet in the supply room. Was not unusual to wear the darn things home!