And in this time of critical change, as medical record systems roll out, the November cover story by Senior Editor Diana Manos is all about patient engagement through the medical record. This is terrific news, because now is the time when systems are being configured and policies are being set. And two things I love are at the core of the article: SPM people, and the OpenNotes project, which we’ve often written about here. 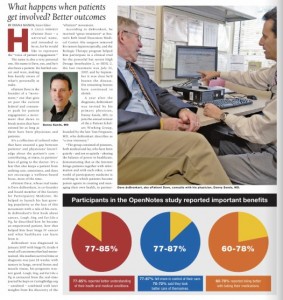 The subhead says “What happens when patients get involved? Better outcomes.” SPM co-chairs Dr. Danny Sands and I are shown, as is SPM health policy chair David Harlow. Also shown and quoted are the principal investigators of the OpenNotes study, Jan Walker RN MBA and Tom Delbanco MD.

Colorful graphics highlight key findings of OpenNotes, which all boil down to this: People perform better when they’re informed better. And contrary to some expectations, patients do not freak out when they see what the doctor wrote.

You can read the article and the entire issue online now, and download to PDF. (Bonus: page 37 is an “exit interview” with Farzad Mostashari, the outgoing leader of HHS’s health IT office ONC.) The print edition should be delivered next week.

For new visitors to our site, here are links to previous OpenNotes posts:

Here are screen captures of the other pages: 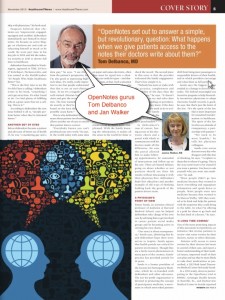 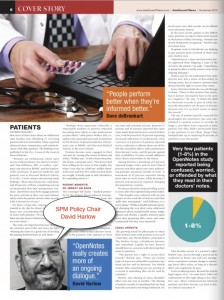