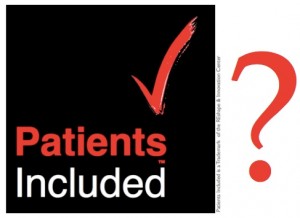 “Patients Included” was created by Lucien Engelen in the Netherlands for his initiative to have patients speak at all medical events. We in the patient community are taking it everywhere we can.

But sometimes – as in this story – someone misuses the concept, acting patient centered but with covert motives. We Do Not Like That. So, with Lucien’s permission, for this story we add a “?” to the badge.

This drives me nuts. The best of pharma saved my life! But time after time the industry sticks itself in the eye with a stupid, unnecessary action that gives the whole industry a bad name, and nobody ever says “HEY, KNOCK IT OFF! You’re making life difficult for your colleagues!”

This guest post, by SPM member Sara Riggare @SaraRiggare, a Parkinson patient in Sweden, tells of another dumb, unnecessary black mark on the industry’s name – and how they got busted. (My term, not Sara’s.)

I have friends in pharma. Hey, guys: every time you run into a regulatory problem or lack of consumer trust, it’s because of stuff like this! Police yourselves! Set professional standards, and enforce them! How about a CEPM credential – Certified Ethical Pharma Marketer – which you can strip off someone when they do something like this.

Here’s Sara’s post. Note that Sweden has part of what we need, but it still didn’t matter until an e-patient knew about the rules and looked into it.
___________

Being a maybe extremely engaged patient (e-Patient Dave once called me “super-empowered” and it made me very proud), I am a member of a number of organizations, one of which is the Swedish Parkinson Disease Association.

A few weeks before Christmas, I got an email with a survey from them, allegedly wanting to investigate how patients with Parkinson are being cared for in different parts of the country and how long it can take between referrals, investigations and possible change of treatments in healthcare. I started taking the survey, but something about the questions and the listed responses made me wonder.

I checked the open database maintained by trade association LIF, listing all collaboration projects between pharma and patient organizations. (This is an important self-regulation mechanism that normally works well.)  Aha: this survey was funded up to 249,000 Swedish crowns (SEK) (US$38,000) by pharma company X. There are rules on openness and transparency for this type of collaboration – but nowhere in the survey was the funder mentioned.

As I completed the survey, I went from surprise to astonishment; how can they claim to want to investigate the situation in different parts of the country when there is no question on where you live? And what was the patient organization getting out of this survey?

It turns out that “Pharma company X” supplies Duodopa, one of the three advanced treatments for Parkinson available in Sweden (and one of the treatments mentioned in the study, along with its competition).

Now, don’t get me wrong, I am all for improved treatments for difficult and serious diseases. But they come at a price: in this case 400,000 SEK per year (about US$61,000), compared to my 15 pills a day, which cost the Swedish taxpayers 90% less. (Healthcare and prescription drugs are practically free in Sweden. I pay no more than US$400/year, for everything.)

What really stuck out in the survey was that although it was distributed by the patient organization, and claimed to study treatment variation by region, it didn’t ask where I lived, and didn’t sound like how Parkinson patients think, and didn’t talk about what what we actually do. It focused solely on three advanced treatments, and completely lacked any questions about what people do most: oral medications, selfcare aspects, patient activation/empowerment or the benefits of physical activity.

It felt almost as if the survey had been designed to make the respondents start asking their physicians for the advanced treatments as soon as possible.

What do you think of these questions (translated from Swedish):

Have you heard of the following treatments?

What kind of treatment are you receiving?

How satisfied are you with your current medication?

What is your view on being investigated for any of these treatments?

My concern about this survey made me contact LIF and I was advised to send in any information I had to their “compliance officer”. He chose to refer the complaint to “The Swedish Pharmaceutical Industry Information Examiner” (IGM), a scientifically qualified doctor, working independently to examine information and other marketing activities for pharmaceuticals from the industry.

A few weeks ago there was an article in the medical newspaper in Sweden reporting the decision of the IGM in this matter (http://www.dagensmedicin.se/nyheter/fragor-om-vard-var-reklam/ In Swedish). IGM found the company guilty of serious misconduct on two accounts; neglecting to clearly inform who was funding the survey and “attempting to induce a demand for a specific treatment from the patients”.

IGM also writes: “The choice of treatment is not usually done by answering questions from the patient organization, but is a matter to be discussed by the treating neurologist together with the patient.” LIF charged pharma company X 140 000 SEK (about US$21,000) for the incident.

What can we as e-patients learn from this?

Well, I must say that I am happy to see that the system for pharma self-regulation seems to work satisfactorily in Sweden. Also, that we have to be aware that pharma first and foremost are working for their shareholders and not for patients. And that does not have to be a bad thing, to be able to develop new effective drugs, of course they need lots of money.

But they also have to comply with the rules that apply in the specific country in question when interacting with patients. And in my view, we as e-patients have a responsibility to do our best to bring out the patient perspective everywhere we go, but it needs to be the well-informed patient perspective for us to be included as an equal stakeholder in the discussions. We just have to acknowledge that pharma cannot be patient-centered if the don’t involve patients FOR REAL!
________________

Sara Riggare is an engineer by training who experienced her first symptoms of Parkinson’s disease around 1984, at age 13 but wasn’t diagnosed until nearly 20 years later, in 2003. In 2010 she decided that she wanted to combine her patient experiences with her engineering skills to try to improve things for herself and others with chronic diseases so she started studying at a masters program in health informatics at the Karolinska Institutet in Stockholm, Sweden. Since March 2012, Sara is a doctoral student at Karolinska and the topic of her research is “Personal observations as a tool for improvement in chronic disease”. She has a blog: ”Sara – Not patient but im-patient” at www.riggare.se.