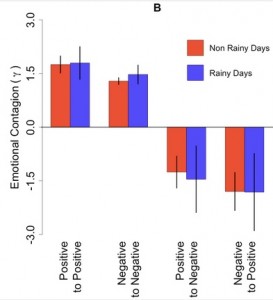 Graph showing the spread of feelings among Facebook friends: positive and negative messages each correlate strongly (left side), and positive-negative mismatches have weak correlation (right side). And all this because of reactions to rainfall!

This isn’t directly related to participatory medicine per se, but for students of the social web and “health is social” factors, this will be fascinating and important. (In my speaking work, it’s always useful to cite new research that sheds light on how social connections work and how the internet affects things.)

Many here are familiar with the work of Nicholas Christakis (@NAChristakis) and James Fowler (@James_H_Fowler), who’ve documented the substantial health effects that come from who you know. (We wrote about them several times in 2010.) This is such a strong effect that it alters our thinking on how to solve public health issues; the most astounding to me was that your odds of being a smoker depend more on the behavior of your third order connections than on your genetics or family. (Your own probability of being a smoker depends not just on whether your friends smoke, not just on whether their friends smoke, but on whether their friends’ friends smoke … that is a bigger influence than your own genetics.) Same for obesity.

Given that reality, it’s pretty obvious that (a) there’s more going on here than just biological issues, and (b) informing the individual is only part of the solution. (As I said in Let Patients Help, “Information alone doesn’t change behavior.”)

A team including Christakis & Fowler looked at … well, here’s the complete abstract:

Happiness and other emotions spread between people in direct contact, but it is unclear whether massive online social networks also contribute to this spread.

Here, we elaborate a novel method for measuring the contagion of emotional expression. With data from millions of Facebook users, we show that rainfall directly influences the emotional content of their status messages, and it also affects the status messages of friends in other cities who are not experiencing rainfall.

For every one person affected directly, rainfall alters the emotional expression of about one to two other people, suggesting that online social networks may magnify the intensity of global emotional synchrony.

Of course, there is indeed a health impact to this, since (I’ve often heard) mood can affect well-being. But it’s not the main point of the article.

The article is here, in the open-access journal PLOS One. (PLOS is Public Library of Science, where every single article is available for us to read at no cost. That’s a wonderful thing compared to the journals that require subscriptions, unless you happen to be part of academia, in which case your employer generally has access for everyone including you.)

Thanks to Joe Kvedar of the Center for Connected Health for pointing to this the other day on Twitter.