This essay was written by Sarah Greene, co-founder of the Journal of Participatory Medicine and currently Founder/CEO of RapidScience.org.

“That the powerful play goes on, and you may contribute a verse.”

We New Yorkers have been marveling at the beautiful weather bestowed on us this summer, and yet the dark and heavy cloud of Jessie’s leave-taking on July 14 has kept me in a months’-long swelter.  I think Jessie would have dubbed this an ‘Aftershock’, although in her book of this title the heroine returns to offer sage learnings after jousting with the Grim Reaper.

I’ve found inspiration, if not solace, re-reading her writings in books, the Prepared Patient blog, and various other essays, and have witnessed her grace again in the “Good Behavior!” videos. Not to mention the many eloquent tributes to her legacy at the Center for Advancing Health, where I was honored to serve as a trustee, and at the Journal of Participatory Medicine (JoPM), on which we worked closely in its infancy.

Yet some solace has arrived through the heavy lifting of poetry. What I want to recall here, as two memorial services approach in NYC and DC, is the soulful side of my friend Jessie – surfacing in full bloom in her college years as a poetry major and finding expression throughout her life, including recently when she accepted the National Coalition for Cancer Survivorship’s “Excellence in Health Media” award. That talk began:

Prospero in Shakespeare’s The Tempest said that the poet gives to airy nothingness a local habitation and a name. Think how beautiful that is…

Then she repeated the opening, knowing that we must brake for poetry; and proceeded to suggest that her peers at NCCS had given survivorship a place and a name.

I believe it was this poetic reach that energized and centered Jessie’s work and personal challenges as a patient and survivor, putting a name to the edge of life we will all inhabit with our loved ones and with our selves.

Our poetry friendship began when Jessie was diagnosed with cancer #4 in 2010, as she was forced to resign her co-editorship of JoPM. I brought her a book by a favorite poet, former US Poet Laureate Ted Kooser – Winter Morning Walks: One Hundred Postcards to Jim Harrison, written while he was in recovery from squamous cell carcinoma (hear the Emmy-award-winning CD based on these poems, described and sampled on NPR). 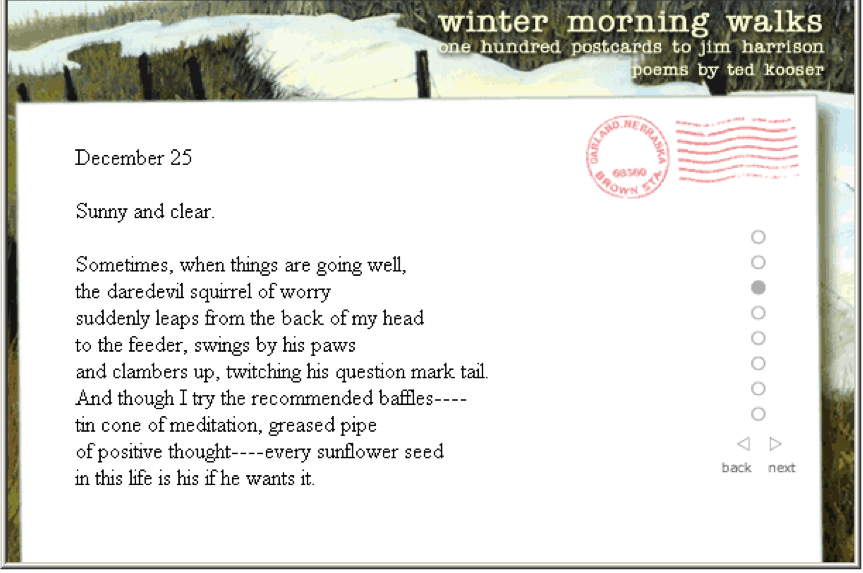 Jessie responded that she found the postcards a perfect salve, “despite having the attention span of a guppy,” and sent me this poem by Kabir (15th c.; translation by Sushil Rao), which spoke to her as she prepared for surgery (Oct 2010):

Hiding in this cage

of visible matter
is the invisible
lifebird

pay attention
to her
she is singing
your song

From those exchanges four years ago, we often turned to poetry in email and in person, as an antidote to life’s frustrations, hopes, and fears. On one occasion, when I was apparently overthinking and overwhelmed with my work in London, she sent the following by Rumi (13th c), with the advice, “OK, Ms. Brainiac: Slow down. Read the attached.”

Today, like every other day, we wake up empty

and frightened. Don’t open the door to the study

and begin reading. Take down the dulcimer.

Let the beauty we love be what we do.

There are hundreds of ways to kneel and kiss the ground.

We slowed each other down. In our final conversation at lunch in late June, I was dismayed to see Jessie had slowed down considerably, no small matter for this hyper-achieving woman. I’d just returned from a poetry tour of New England, and was enamored of the transcendentalists. We discussed a book I discovered, The Tao of Emerson, from which Jessie’s spirit leaps on every page – unsurprising, given the revolutionary nature of these personages (another blog post! – her life as rebel in the name of truth and justice). In each chapter or two-page spread of the book, the poetry of Lao Tse, author of the Tao Te Ching, is juxtaposed with the words of Ralph Waldo Emerson, assembled as poetry by author Richard Grossman. I had ordered a copy for Jessie and inscribed it with this passage, immediately recognizable as a descriptor of our heroine:

The world rolls, the din of life is never hushed,

The carnival, the masquerade is at its height,

Nobody drops his domino…

But I am only an experimenter;

Do not set the least value on what I do

or the least discredit on what I do not.

As if I pretended to settle anything as true or false;

I unsettle all things.

No facts are to me sacred, none are profane….

I put myself in the attitude of reception,

But from some alien energy, the visions come.

We talked that day about the zen-ness of her nature – her acceptance of the grim illnesses she has dealt with and her centeredness.  While not a zen practitioner, Jessie had found that center and lived it. Emerson references it in his essay on Plato as “centripetence”: the tendency of energy to progress toward the center, or essence, of things:

“A multitude of trifles impede the mind’s eye from the great search of that fine horizon-line that truth keeps.”

Or as Lao Tse instructed: “your inner being guard, and keep it free”.

Jessie was my compass, my true-north; more than once she kept me from tripping on those trifles. Her last two transmissions in July kept the flame burning — a copy of Maira Kalman’s lovely book, The Pursuit of Happiness, and these words: “The ephemera of life keep getting in the way of progress/brilliance…keep watch.”

I will miss her terribly, but her verses will be close at hand.