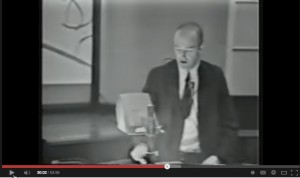 Students of medicine (surely most MDs) will know the name Larry Weed, but I didn’t until a few years ago on this blog, when I learned that in 1999 our founder “Doc Tom” Ferguson gave Weed an Outstanding Achievement Award.

In the late 1960s Dr. Weed created the concept of the POMR: the Problem Oriented Medical Record, and the corresponding concept of SOAP Notes (Wikipedia). Physicians have told me that these ways of organizing medical thinking truly revolutionized the practice of medicine – I’d welcome discussion in the comments.

Well, someone unearthed this priceless video of him lecturing about it at Emory University when it was brand new –  in 1971, forty-three years ago. (Check out the snazzy overhead projector, the microphone strapped to his chest!) If you don’t know how medicine was practiced before this unique idea, you may be aghast at the first few minutes. Believe it or not, the medical record was not at all organized by the patient’s problems; listen to the mess that resulted.

Then he gets into how impossible it will be to improve medicine if we don’t get systematic about how we define problems and systematic about our approaches to them. Many of the points he made are still applicable today. His current book is Medicine in Denial, a title that will come of no surprise to you if you make it through all 54 minutes of this talk.

Dr. Weed is 80 now, and lives in Vermont, where I gave a speech yesterday. I ended up talking to him on the phone, and very much hope to connect in person soon.