Yesterday at the New York Academy of Medicine was the first of Jessie Gruman’s two remembrance events, which we blogged about. Here’s a view of the gathering, which was followed by a reception.

It was a fitting, moving, great tour through her life, with short talks by many people who knew her: Jessie the Child, Jessie the Adolescent, Jessie in Israel, in New York, at CFAH, Jessie the Patient, the Advocate, the Traveler, the Sister, the Friend. And Jessie and Richard (Sloan), her soul mate and husband of 34 years; and the last, titled “Jessie, the Force.”

In the photo at left are SPM pioneer and MedScape founder Peter Frishauf, Sarah Greene (original managing editor of our Journal, when Jessie was founding co-editor), and SPM member Jeanne Pinder of ClearHealthCosts. 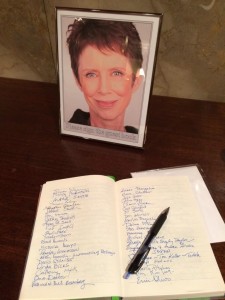 @NotesOnNursing tweeted the snapshot at right of the guest book that so many signed. This was a remarkable woman – more remarkable than I even knew, I’m sad to say. Of the two gatherings, yesterday’s was the home / personal one.  This Thursday in DC will be the second one, more centered on professional life:

(I can’t be there – I’ll be en route from a speech in Arkansas.) Again, from the first post:  Jessie’s family has asked that contributions be made to: