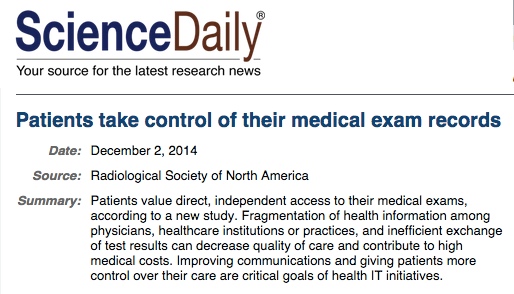 Healthcare providers who are tracking patient experience and patient satisfaction, take note: a new study reported yesterday in Science Daily provides evidence that we patients really like it when we can view the data you collected about us.

Even us over-50 ones, who are widely believed to be technologically not up to the task. (Fans of patient autonomy, like SPM member Hugo Campos, will like this too.)

Read the whole piece in Science Daily for more specifics, but here are a couple of hot spots worth circulating widely:

“…2,562 patients, mean age 50.4, including a significant representation of older individuals. … ‘The high level of enrollment among people in this age group demonstrates their interest in tools that may facilitate the management of their complex medical records and communication with their providers,’ Dr. Greco said.”

“Nearly all (96 percent) of the patients responded positively to having direct access to their medical images, and 78 percent viewed their images independently.”

Note the “independently.”  All by themselves, with nobody helping them – outside of an office visit!

This was about the use of the RSNA (radiology society)’s Image Share network.  I haven’t used the product (I’d love to hear from people who have), but note these points from the article:

… RSNA Image Share, an Internet-based interoperable image exchange system that gives patients ownership of their imaging exams and control over access to their imaging records.

Ownership??  Did they say ownership, as in take it anywhere I want, all by myself??? Read on:

The network enables radiology sites to make imaging exams available for patients to incorporate in personal health record (PHR) accounts they can use to securely store, manage and share their imaging records.

Available for me to incorporate in my PHR? To manage and share my images, all by myself??

… the RSNA Image Share system avoids the legal delays and expenses associated with virtual private networks and enables the same flexibility of access characteristic of physical media like CDs. Patients who use this system have the ability to allow any provider they wish to access their images, as they do with CDs.

“Allow any provider they wish to access their images”: That’s a key enabler of patient autonomy – the patient’s ability to decide how they want their care to happen. Hugo Campos (mentioned above) wishes he had that kind of autonomy about the device his doctors wired into his heart.

[Edit: And Christine Bienvenue’s comment below brilliantly illustrates how this can have real clinical impact.]

I don’t know if there are any “gotchas” to RSNA Image Share – cost to the doctor, logistical hurdles, or anything – those would be great to discuss in comments. All I’m saying is, hooray for this evidence that patients (even 50+) overwhelmingly like control of their own images, and hooray for the idea of letting us do what we want with our own blinkin’ medical exams. Which are about us, after all, and which we paid for, one way or another.

This isn’t the first evidence that patients really value access to their information; this study has strong echos of the findings of the OpenNotes study. (See our post on the results and our many other posts.) From the results post:

So, people, connect the dots: in this era of changing healthcare, patient access is liked, and it looks like it will have real impact on which hospitals and providers are preferred by patients.  As I often say in my speeches, “So, it’s game on: if Hospital X in a city says ‘We’re not gonna do that’ and Hospital Y across town says ‘We are,’ we’ll see how it plays out in the marketplace.”

It’s simple, as we’ve been saying for years: Give us our DaM data – Data About Me.