The movement gets real: one of Doc Tom’s sightings gets $28 million with Iora Health

There are times in a movement when value is revealed and recognized, and you know something real is happening. In the engaged-patient movement, the first I noticed was when Amy Tenderich’s Diabetes Mine blog (and its community) was acquired several years ago. That takes it from what some people might view as “clubby” to tangible significance. (Oh, and they just got picked up again (amid a flurry of press releases) by Healthline.) 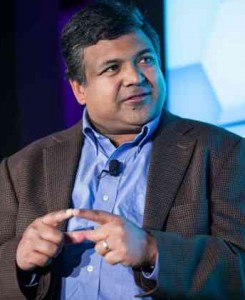 This post is going to be pretty enthusiastic so I’ll say at the start that I have no connection with Iora Health. I believe in what they’re doing, but that’s all – I’ve never visited or even talked to them, though I’ve met CEO Rushika Fernandopulle (left).

I first read about him, seven years ago this week, for what he was doing back then.

Twenty years ago the founder of our movement, “Doc Tom” Ferguson, predicted that the internet would turn healthcare on its head: see Steal These Slides, which cites CNN as calling Tom “the George Washington of patient empowerment.” He then started spotting various people doing things differently because of the internet, including SPM founders Gilles Frydman, Alan & Cheryl Greene of DrGreene.com, Dr. Danny Sands, Joe & Terry Graedon of PeoplesPharmacy.com, etc.

Tom died unexpectedly in April 2006, and a year later his colleagues finished and published the “e-patient white paper” that’s the foundation of our movement. (Funded by Robert Wood Johnson, it’s a free download in English or Spanish – see the black icon at right.)

For many years, Harvard’s Rushika Fernandopulle has been a tireless champion of healthcare reform. Until recently, he led the Harvard Interfaculty Program for Health Systems Improvement, a group of senior Harvard healthcare experts seeking innovative solutions to the largest, most difficult problems facing healthcare. …

It went on to describe his work in new, modestly-priced versions of “concierge care” – a flat rate subscription plan that offered unlimited doctor visits and, often, free prescriptions. Concierge care used to be for the very rich, but he explored bringing it to the masses.

Well, for the last several years he’s been working on a different model, originally called Renaissance Health and now called Iora Health. In this model of primary care, each patient is assigned a doctor and a health coach. Yeah – you get the genius, who you see every now and then, but you also get someone you can talk to pretty much anytime. To help you get through life, without taking up the time of the overstressed genius.

(Did you know that in America, physicians have the highest suicide rate of all professions? Doesn’t that suck?)

Like many startups, Iora spent three years getting the model right. Then in 2014 they nearly doubled, to 11 practices in six states … so nobody can claim “Well that only works in Massachusetts.” In 2015 they plan to double in size….

… and they just got market support for the validity of this model: $28 million in investor funding. (Series C, for those of you who are into such things.)

Here’s the press release, and here’s a Wired article about Rushika’s appearance at their “Data | Life 2013” conference.

This thing is real, people. Remember what Stewart Brand said:

“Once a new technology rolls over you, if you’re not part of the steamroller, you’re part of the road.”

He was the editor of The Whole Earth Catalog, and Doc Tom was its medical editor.

And now – decades later – it’s evolving into business reality. Congratulations to Rushika and all of Iora.