Sure to be a complex controversy: “Concurrent surgery” (Boston Globe Spotlight series) 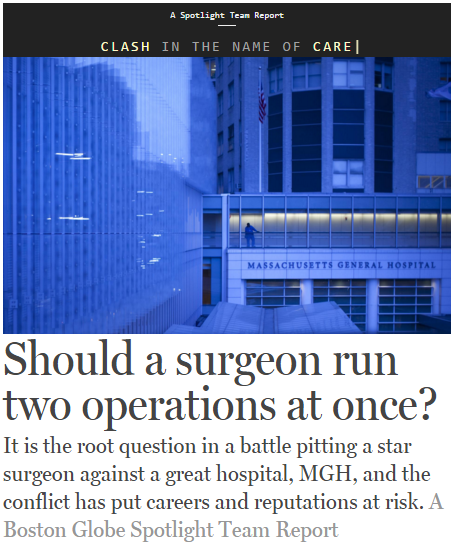 Ah, the world of social media. This morning’s Boston Globe “Spotlight” investigative team (which won a Pulitzer in 2003) has this, citing local superstar hospitals Massachusetts General and its sister hospital, Brigham & Women’s. Within an hour the discussion got so meaty that I knew we had to move it here, because Facebook threads basically disappear in a week, and this needs to last. It has such implications for patient and family engagement, starting with just being aware of the realities of hospital business and how that affects the staff who will treat your family.

Should a surgeon run two operations at once, moving from room to room in the times when s/he isn’t needed in the other OR? It’s a splendid example of a complicated question in medicine, with (IMO) no clear answer, so don’t jump to a conclusion without reading and thinking (including the discussion pasted into this post).

The issue involves evidence, ethics, statistics, best use of resources, and an inescapable reality (as I’ve said for years in speeches): we all need to be honest that it’s dangerous to cut people open. In the featured case here, no one has any idea if the patient’s disastrous oops was related to the surgeon doing two cases at the same time.

There will be much fighting about this I’m sure, in the coming weeks. Here are the first comments from Facebook, pasted in with permission.

Hari Khalsa, nurse practitioner and patient advocate: This is why informed consent is so important. I have my clients cross out that the surgeon can designate a resident or fellow to do the surgery. They write in bold “only the surgeon”. This is a legal document.

Then an exchange between two of the smartest people I know anywhere, Peter Schmidt (head of the Parkinson’s Foundation, not an MD) and Henry Feldman MD of Beth Israel Deaconess, who I can only describe after following him on FB for years as superhuman for his breadth of knowledge, skills, and range of clinical experience. Immediately they illustrated how complex this is:

Peter Schmidt: I did my fellowship in an orthopedic hospital, HS. We didn’t allow concurrent surgery, the place down the street, LH, did. The main reason HS gave for restricting concurrent surgery (surgeons wanted it and sometimes left to get it) was that we had trainees in every OR. Trainees require education and supervision. We really didn’t think of this as a patient safety issue, because no single individual was responsible for patient safety.

At LH, when a surgeon was allowed concurrent surgery, the surgeries were staggered so that the stuff the surgeon did not overlap but the stuff residents and fellows did. When bad stuff happens, it’s very easy to blame things on things like concurrent surgery or things like that. However, there is good science (I am doing some of this) to show that the very best doctors deliver the best outcomes. Would it be better to tell half (or more) of surgeon Wood’s patients that they should be operated on by a less-skilled surgeon? There are trade-offs on both sides.

If you win the lottery and get treatment by the expert surgeon, you certainly prefer him to be in the room for the whole procedure. However, if you lose the lottery and are told, “Dr. Wood can’t do the really hard part of your surgery because he has to supervise the resident suturing up another patient’s wound per hospital policy,” you’d be pretty angry. And, complications from the less-skilled surgeon’s best efforts would be blamed on the surgeon or the procedure, ignoring the fact that those complications could likely have been avoided if Dr. Wood had not been supervising wound closure down the hall.

These things are complicated. My own work is not focused on improving the quality of the very best care, but rather on improving the quality of the average care — what can we do to give everyone the benefits of what we know about how to achieve the best outcomes. In that work, we often come up with situations where we recommend that one patient trade access to a world-leading expert to guide them in something routine in order for that world-leading expert to guide another patient in something critical. There is something, very small, lost to the patient in the routine encounter. In surgery, it is possible that this very small loss could lead to death, however we have to recognize that we are doing this to reduce the risk of death in other patients 10 or 100 fold.

Henry Feldman: I don’t think most people would view the primary surgeon not being there during skin closing as not being there for the operation (I guess except plastics cases where that may be the case itself), in the article they are talking major substantive parts of the operation. Not coming to the OR despite repeated requests by a trainee, and taking so long the cement has partially dried, seems like you were absent for a “substantive part” of the operation. At our hospital I can’t even be outside the curtain when the house staff put in a CVL, and have to be in direct visual contact with the patient, and site from time-out to flush (I don’t have to be there technically for suturing in and dressing). Also were these surgeons even there for the time-out?

Peter Schmidt Henry- I agree with you, and at the hospital where I did my fellowship we did not allow this at all. However, I am concerned about using the egregious case to stain a widely adopted practice. What if the resident noted a serious complication in recovery? Should the surgeon rush over? I hope so.

Also, that’s why I specified “the important part”…

Henry Feldman: Ha. I once responded many years ago to a panic call as the medical consult attending to the PACU [post-anesthesia care unit] from the PACU nurses for a patient in serious trouble. I thought it was a medical patient who was down for a procedure (it wasn’t, he was primary surgery), but ultimately they were calling because they couldn’t get the surgeons to come because “they were scrubbed” (patient did fine after I moved him to the MICU [medical ICU] – awkward!). So this is really a staffing issue on the surgical side, and the fact payment and staffing models encourage this needs to be fixed.

The discussion’s already continued (while I blogged) – let’s go to the comments now.