The truth about that “your Googling and my medical degree” mug 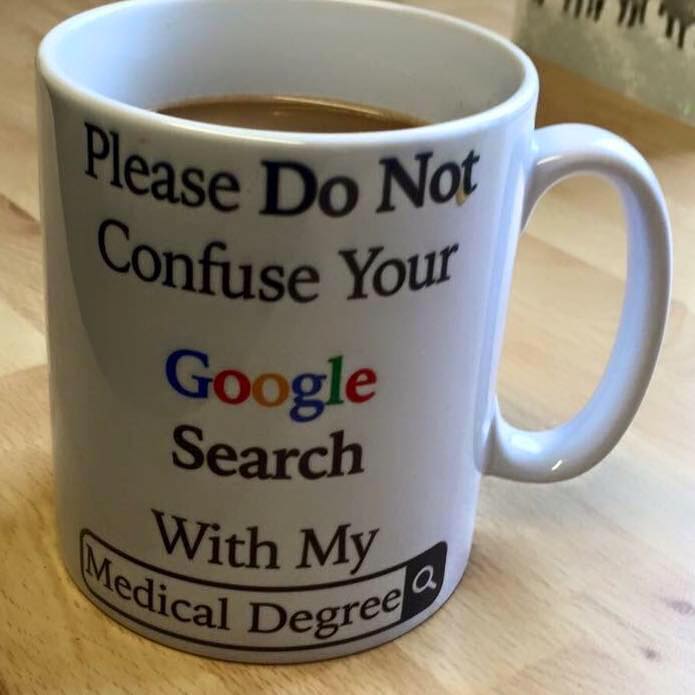 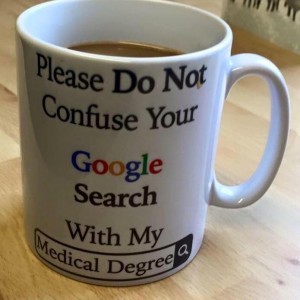 I can’t tell you how many people have flung this Facebook item at me since last night, starting with my wife. :-) It’s already approaching 25,000 shares.

Listen, people: Googling does not mean I think I’m a doctor. It’s a sign of being an engaged, empowered “e-patient.”

I partner with great doctors – I don’t tell them what to do. And they welcome me doing it.

I personally am completely opposed to a patient going in and saying “I’ve decided I have condition X, and I want you to prescribe 42mg QID of medication Y.” I mean, have you ever seen the things medical students have to learn to get their license??

But I’m all in favor of a patient saying, “I have symptoms A and B, and from what I can tell from websites J and Q, that sounds like it could be M.” Explain your thinking, identify your source, and try to solve the diagnostic puzzle together: Collaborate.

The flip side is that it’s demonstrably wrong for a doctor to insist that their diagnosis must be right; the Society to Improve Diagnosis in Medicine has lots of data on that, and the National Academy of Medicine recently published a big report on it. (See SPM patient member Peggy Zuckerman’s recent spot on the NBC News item about that report.)

And to flip it again, patient engagement isn’t a synonym for “the patient is always right.” (See SPM co-chair Dr. Danny Sands’ five minute video about that the other day.)

It’s absolutely, demonstrably wrong for a doctor to think that doctors know everything that needs to be known and patients can’t possibly know anything useful. To the contrary, not googling can bring death.

Here’s a one minute animation published in February by the BMJ, co-produced with Lucien Engelen at Radboud University Medical Center in the Netherlands, that explains how the world of information has changed:

Googling is a sign of an engaged patient. The only reason a patient ever searches for information is because they’re trying to learn more! To smack that down is to discourage engagement. In my speeches I often say, “If someone’s trying something useful but they’re not good at it, coach them, don’t say ‘Stop that.'” (We’ve written about modern medical practices like Iora Health, where a patient is assigned not just a primary care provider but a coach they can talk to between visits.)

That’s empowering. That’s modern. That’s participatory. Do it that way.

The tricky parts of medicine are hard. Work together.

Docs and other providers: Don’t find out the hard way that you (with the best of intentions) have become a “dinosaur doc” of the worst sort – one who refuses to see that the world has changed since they were licensed. If you were taught that patients can’t know anything, take a look around. Maybe even read our e-patient white paper, the 122 page manifesto funded by Robert Wood Johnson and published in 2007, documenting the reality of engaged, empowered patients. It’s a free download on the right sidebar of this blog.

And patients, seriously: think for yourselves, sure, but I advise that you not think that gives you the training and clinical experience those licensed people have. Think, ask, engage, participate.

Culture change only happens when what people say changes, and that starts with discussion. So I’m thrilled at how much this rich, subtle conversation has persisted.

Here are snips from my two personal favorite responses so far: