Big news: a multi-foundation $10 million grant will spread OpenNotes access to fifty million more patients! Nearly 20% of America will have full access to their providers’ visit notes, so they can review them from anywhere! 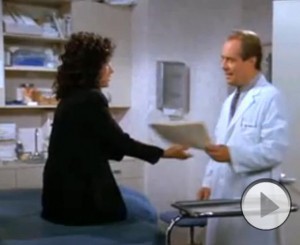 Regular readers know we’ve always been loud fans of the OpenNotes project. Initially funded by Robert Wood Johnson Foundation – who also funded “Doc Tom” Ferguson’s white paper, the basis for our Society – the project established that when patients can see everything the provider wrote, good things happen (and the sky doesn’t fall).

For real-world examples, at bottom of this post see the “must read” set of stories we posted last year. It’s an expression of one of my own aphorisms: “People perform better when they’re informed better,” in direct contrast to the famous Seinfeld episode where Elaine tries to look in her chart and sees she’s been marked “difficult.”:-)

At bottom of this post is the history of the project via our many blog posts here. Here’s the OpenNotes website with many resources, here’s MyOpenNotes on Twitter, here’s the official press release, and here’s the email I got on Monday:

We are thrilled to announce that the Robert Wood Johnson Foundation, the Gordon and Betty Moore Foundation, the Peterson Center on Healthcare, and the Cambia Health Foundation today jointly announced funding to help spread access to clinical notes to patients nationwide.

The results of the OpenNotes study involving 100 primary care doctors at BIDMC, Geisinger Health System in Pennsylvania, and Harborview Medical Center in Seattle, and 20,000 of their patients, were published three years ago in the Annals of Internal Medicine. We learned that inviting patients to read their notes not only helped them become more knowledgeable about their medical conditions and care, but also enhanced the clinician and patient relationship. Evidence is beginning to show that this kind of engagement has implications for improving the quality and costs of care, and that having a second set of eyes on the record may be an important way to improve patient safety.

In just a few years, OpenNotes has become a movement that has spread well beyond primary care to more than 5 million Americans. The joint gift of $10 million will support the OpenNotes team’s capacity to assist providers with adoption, to reach a wide range of consumers, and to evaluate the impact of the effort on quality and costs.

Thanks so much to RWJ, Moore, Peterson and Cambria for supporting data liberation and better care!

The history of OpenNotes as recorded here 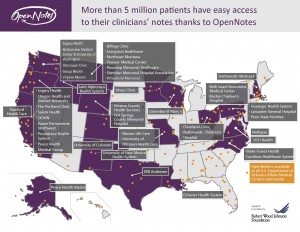 OpenNotes adoption map as of mid-October, 2015, BEFORE this announcement (click to enlarge)

Our Society for Participatory Medicine has always felt that full access to the medical record will be a key enabler of the best participatory relationships between providers and the patients and families they serve. As SPM co-founder and co-chair Dr. Danny Sands often says, “How can patients participate if they can’t see what I see??”

So it’s no surprise that we’ve covered it a lot, and reviewing this today, I realized that our five+ years of posts provide a great context for this week’s announcement.

Related posts, not about OpenNotes per se:

Must read! 9/5/14: True stories of where patient engagement in the chart made a difference