Ten years ago today, Tom Ferguson died unexpectedly. He was in the hospital at the University of Arkansas for Medical Sciences (UAMS), being treated for multiple myeloma.

Tom’s work back then was captured on his website, doctom.com, which has been preserved and is still live today. Here’s a screen capture. 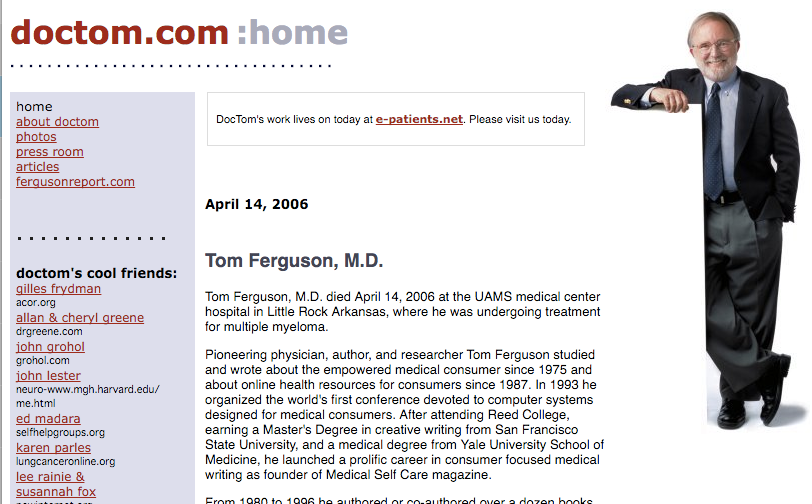 From the site’s About page:

Pioneering physician, author, and researcher Tom Ferguson, MD (“doctom”), recently honored as an “Intel Internet Health Hero,” has been studying and writing about the empowered medical consumer since 1975 and about online health resources for consumers since 1987. In 1993 he organized the world’s first conference devoted to computer systems designed to be used by medical consumers.

How great is it that Intel, which is now getting heavily into healthcare, honored Tom back then? And he ran a conference about computer systems for use by patients – in 1993?? Before the Web? That’s empowering.

A note from one of Tom’s physicians 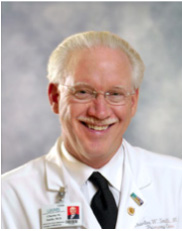 Charlie Smith, who is today the editor of our Journal of Participatory Medicine, had already started eDocAmerica (Twitter @eDocArkansas), whose mission is “to empower individuals and families to take more control of their health.” When Tom arrived at UAMS and Charlie became one of the physicians he consulted with, they became friends and colleagues too: it was a natural fit.

Tom became a good friend and was instrumental in changing my attitude toward patients and my practice. I’m so grateful to him and miss him very much.

I was “on my way” with the work I had done with eDoc, but Tom and I met in Little Rock while he was being treated here for his medical issues. We hit it off, and he soon introduced me to a wonderful group of colleagues who have also become good friends, the Cooks Branch scholars group.* And, as you well know, I am now co-editing the Journal of Participatory Medicine as a direct result of this introduction.

He and those colleagues have all taught me so much about a different way to be a physician. After my first few encounters, he, and his partners in crime, taught me how to become a physician who would strongly advocate for patient participation and actively encourage patients to take control of their own health care with the assistance of physicians and fellow patients.

Tom was determined to finish the White Paper during his last years which he did with the input of the Cooks Branch group. Later on, after he died, several of us decided that we should add a final chapter, to chronicle recent trends in technology and practice transformation that have the potential to take patient participation to new heights.

Tom’s influence clearly lives on. Frankly, I think it is growing posthumously! I remember him with great respect and fondness. He was a unique giant of a man.

Have a look around doctom.com.  It’s primitive looking by today’s standards but has amazing content for back then, especially considering that he started it two decades ago and had already been doing it for years.

*Cooks Branch is the place in Texas where the group would meet from time to time.