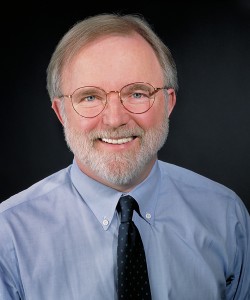 I first met Tom Ferguson in 1994 online (where else?) when he reached out via email to chat about online support groups. I was still in graduate school at the time, and he had come across my indexes of Internet support groups for health and mental health concerns. He was writing a book (“Health Online”) and wanted to better understand these kinds of self-help groups.

Tom Ferguson was a voracious inquirer and accumulator of knowledge, with a wonderful sense of humor. His brain seemed like it was full of millions of facts and ideas that he was always excited to share with you.

Tom was also a great disruptor of the status-quo. He understood that could best be done by bringing like-minded people together from different fields and perspectives to help change healthcare.

Tom’s rare quality — of being at the center of a network allowing people from diverse backgrounds get to know and network with one another — was particularly valuable pre-web. He immediately put me in touch with Ed Madara, a community leader at CompuServe and the director of the now-defunct American Self-Help Clearinghouse (a resource of information about every self-help group in the U.S.). Ed and I did a lot of good work together in the late 1990s — something that would’ve never have happened without Tom’s introduction.

I didn’t know much about Tom before we started exchanging emails on a regular basis (and Internet searching isn’t at all what it is today, so there was no quick Googling of his background). So when I first started emailing him, I didn’t know he had started his own magazine (Medical Self-Care) or was the medical editor of The Whole Earth Catalog. I just knew he was an author of a few books and had a warm demeanor (that came through even via email).

You always came away from a meeting or conversation with Tom feeling like a better person. He renewed my hope every time I spoke to him. He seemed like an eternal optimist in his demeanor, but also had an acute mind that realized the complexities of the systems he battled. He didn’t just “think outside the box,” he thought outside of the whole system. He imagined a world without boxes but that instead was composed of interconnected circles of mutual respect, trust, and exchange. In short, he wrote his own rules and followed his own drummer. He was a visionary far before his time. 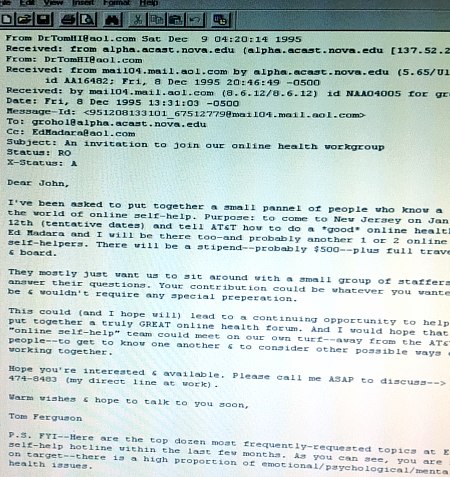 Tom’s fascination, curiosity, and promotion of online self-help was seemingly limitless. I first met Tom face-to-face when he put together a small group to help consult with AT&T in early 1996. AT&T was trying to develop their own online commercial service and wanted to better understand self-help groups and online community. 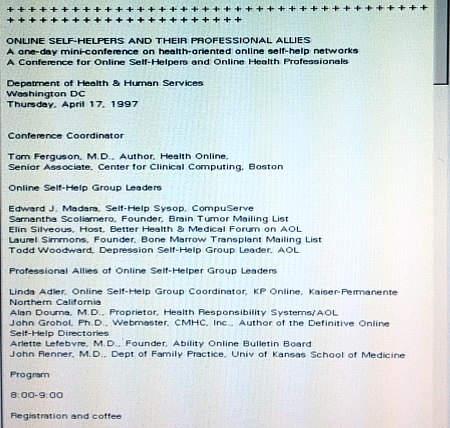 He also organized a national conference for the Department of Health and Human Services on April 17, 1997 in Washington, DC entitled, Online Self-Helps and Their Professional Allies: A one-day mini-conference on health-oriented online self-help networks. This conference brought into the national spotlight the value of online self-help, with a diverse group of consumer leaders and professionals (including myself). Samantha Scoliamero, founder of the Brain Tumor (BRAINTMR) Mailing List, was one of the attendees and easily one of the first e-patients, long before the term was ever coined.

Tom was one of the first people to realize and understand the importance of self-care — that most health care is actually done long before a person ever reaches out to talk to a professional or physician. So in 1997, Tom organized and hosted the first Cook’s Branch retreat at his wife’s family ranch and conservatory north of Houston, Texas. The Cook’s Branch retreats turned into a series of “meeting of the minds” in thinking up ways to disrupt the current U.S. healthcare system and get more people to realize that most health care actually occurs outside of a hospital or doctor’s office.

At the Cook’s Branch retreats, I ended up meeting many lifelong friends and colleagues. These include some of the pioneering online community leaders, such as the pragmatic visionary Gilles Frydman (ACOR, and now the innovative Smart Patients), the curious and creative John Lester (now at OpenText) & Dan Hoch (neurologist) of Brain Talk, the engaging intellectual Danny Sands (doctor, longtime director at Cisco, now consultant), the couple behind the amazing People’s Pharmacy, Joe & Terry Graedon, Charles Smith (ahead-of-the-curve doctor who founded eDocAmerica), and the couple behind the premier online pediatric resource, DrGreene.com, Alan & Cheryl Greene. Later on I would meet other extraordinary people: innovator Sarah Greene, early Internet pioneer Jon Lebkowsky, the energetic, focused Internet geologist Susannah Fox, and of course, the indubitable, unflagging e-Patient Dave. I also got to know the two biggest supporter’s of Tom’s work: his wife, Meredith Dreiss, as well as his long-time assistant and right-hand woman, Anna Bryan.

Tom brought together a diverse group of patients, professionals and others both inside and outside of the health care system to brainstorm and imagine a different world, where everyone was in charge of their own healthcare… Where people, if they wanted, could become equal partners and the drivers of their own care and treatment.

When I moved to Tom’s hometown of Austin, Texas in 1999, he welcomed me warmly like a family member. We spent some good times together that year, and he helped me through a pretty tough time in my personal and professional life. He was always there for me, always willing to lend an empathetic ear, always coming up with some new ideas to explore.

Tom kept my hope alive when I was in a place in my life where I had lost a lot of it.

So in memory of Tom, I raise my glass to you — may the world never forget what you did, the ideas you sparked, and the bonds you helped forge that remain strong to this day. Your legacy lives on. 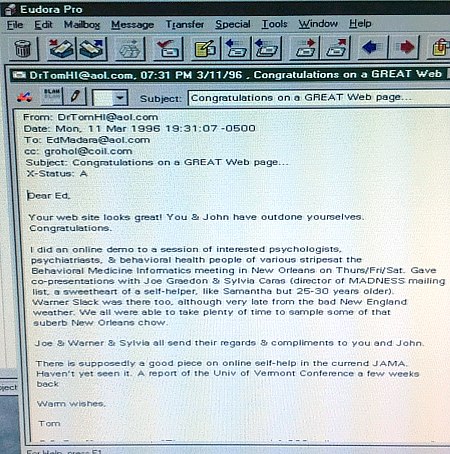 Yes, I’m a digital packrat, and have most emails archived that I’ve ever sent or received!