White Paper Introduction: “Tech is changing how we think about ourselves” #DocTom10

Next in our #DocTom10 series, which started here. If you haven’t read about Tom’s preface, and the Foreword by Pew Research, we urge you to. Remember, this was all written a decade ago. Today, Tom’s introduction. Please discuss! 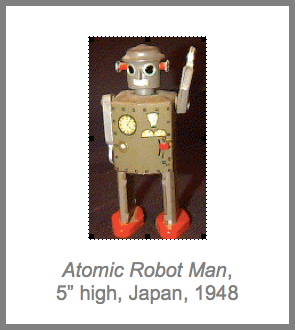 The key question we must ask is not
what technology will be like
in the future, but rather,
what we will be like…
—Sherry Turkle

I collect old toy robots. My Atomic Robot Man robot (Japan, 1948), shown [here], is a personal favorite. For many years I didn’t understand the powerful hold these dented little metal men maintained on my imagination. One day I finally got it: They show us how the culture of the 40s and 50s imagined the future. Cast-metal humanoid automatons would do the work previously supplied by human labor.

That wasn’t how things turned out, of course. By making more powerful and productive forms of work possible, our changing technologies made older forms of work unnecessary. So instead of millions of humanoid robots laboring in our factories, we have millions of information workers sitting at computers. We didn’t just automate our earlier forms of work. It was the underlying nature of work itself that changed.i

In much the same way, we’ve been projecting the implicit assumptions of our familiar 20th century medical model onto our unknown healthcare future, assuming that the healthcare of 2030, 2040, and 2050 will be much the same as that of 1960, 1970, and 1980. But bringing healthcare into the new century will not be merely a matter of automating or upgrading our existing clinical processes. We can’t just automate earlier forms of medical practice. The underlying nature of healthcare itself must change.

This is not some technoromantic vision of an impossibly idealist future. It is already happening. The changes are all around us. As we will see, the roles of physicians and patients are already changing. And our sophisticated new medical technologies are making much of what the physicians of the 1950s, 1960s, and 1970s thought of as practicing medicine unnecessary. Financial constraints are making the old-fashioned physician’s role unsustainable. And millions of knowledge workers are emerging as unexpected healthcare heroes.

When they, or a loved one, become ill, they turn into e-patients—citizens with health concerns who use the Internet as a health resource, studying up on their own diseases (and those of friends and family members), finding better treatment centers and insisting on better care, providing other patients with invaluable medical assistance and support, and increasingly serving as important collaborators and advisors for their clinicians.

We understand that this document may raise more questions than it answers. And while we are by no means ready to dot all the I’s or cross all the T’s, we strongly suspect that the principal protagonist of our next-generation healthcare system will not be a computerized doctor, but a well-wired patient. Yet our formal healthcare system has done little to recognize their accomplishments, to take advantage of the new abilities, or to adapt itself to their changing needs.

Turning our attention to this promising and fertile area—which to date has somehow remained off the radar screens of most health policymakers, medical professionals, federal and state health officials, and other healthcare stakeholders—may be the most important step we can take toward the widely-shared goal of developing a sustainable healthcare system that meets the needs of all our citizens. But as the battered little robot beside my computer constantly reminds me, we are in the early stages of this process. And our current and future new technologies may change the nature of healthcare in ways we can, as yet, only vaguely imagine.

As MIT’s Sherry Turkle has suggested, instead of asking how these new technologies can help us make the familiar processes of medical care more efficient and effective, we should ask ourselves how these new technologies are “…changing the ways we deal with one another, raise our children, and think about ourselves? How are they changing our fundamental notions of who we are and what we need to do and who we should do it for? What new doors are they opening for us?” ii

The key question we must ask, Turkle suggests, “…is not what technology will be like in the future, but rather, what will we be like…” when we have learned to live and work appropriately within the new technocultural environments even now being created by our new technologies. For the healthcare of the future—if it is to survive—will be as novel and unexpected to those of us trained as clinicians in 20th century medicine as today’s computer-toting knowledge workers would have been to the social planners of the 1940s and 50s. We hope that the chapters that follow provide our readers with some interesting and useful perspectives on these questions.

i The term “knowledge worker” was first introduced by Peter Drucker in his book, The Effective Executive (1966). For an excellent overview of the rise of the knowledge worker in western society, see: Peter F. Drucker, “Knowledge Work and Knowledge Society: The Social Transformations of this Century, The 1994 Edwin L. Godkin Lecture, presented May 4, 1994, the John F. Kennedy School of Government, Harvard University.